Tuesday, Nov 03, 2009 – The Kroger Company, during October, partnered with U.S. pork producers to promote the value of pork during National Pork Month. To support National Pork Month, Kroger, the nation’s largest traditional supermarket retailer, is offering specials on fresh pork cuts at great prices throughout its family of stores through November 7.

In addition to special prices The Kroger Company is offering a $1 coupon off any package of fresh pork at the point of sale and from meat department associates.  The Kroger Company’s marketing activities were integrated into a national fall marketing campaign by the National Pork Board, which promotes pork on behalf of all 70,000 U.S. pork producers. “Customers today are looking for affordable, nutritious options to create convenient meals at home and pork offers shoppers great variety and value,” said Mark Van Buskirk, vice president of meat and seafood for Kroger.

Chris Novak, chief executive officer of the National Pork Board, applauds the Kroger promotion. “We are aware that the national recession has caused consumers to squeeze more value from their food budget. Pork has always been a great value, but Kroger’s ability to extend that value through roughly 2,470 supermarkets during October is greatly appreciated by pork producers, who have been experiencing an extended period of economic distress. We have great retail partners across the country, but we are especially appreciative and fully supportive of Kroger’s activities,” Novak said. “We expect them to have a very positive impact.”

A Glance at The Kroger Company

•         Measured by total sales, Kroger is one of the nation’s largest supermarket operators.

At year-end 2008, Kroger operated in 42 major markets and held the number 1 or 2 position in 39 of those markets. The top five major markets are Los Angeles, Atlanta, Houston, Seattle, and Phoenix. 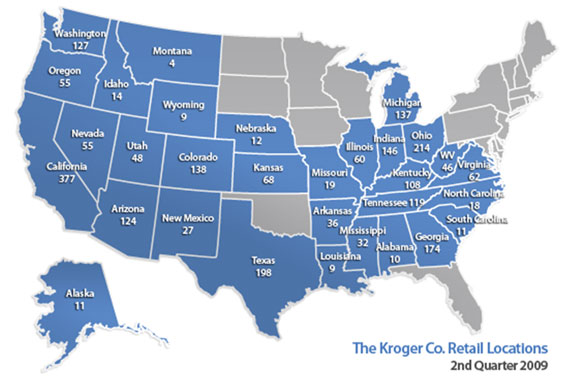