The USDA’s September quarterly Hogs and Pigs Report confirmed continued but moderate growth for the U.S. pork production sector. Along with confirming this trend, the report also solidified three others that have shaped the pork industry in 2017. Whether these trends continue and to what degree will determine producer success in 2018 and beyond.

Trend One: Steady but Moderate Growth

The USDA report indicates that U.S. production capabilities continue to grow at a moderate pace. The key national data appear in the chart below. Year-on-year growth for every key inventory and productivity metric has become the norm in these reports, and September was no exception.

The breeding herd was the largest since June 2008, but just 1.2 percent larger than a year ago. Market hog inventories grew by a healthy, but not large, 2.6 percent from a year ago. Farrowings and litter sizes continued to grow at a pace that suggests higher productivity of the U.S. herd.

Virtually every item in the hog inventory report has set records in 2017. Look for those records to be broken again when USDA’s December report is published.

This growth has been accompanied by unprecedented growth of the pork packing sector over the past 12 months.

None are up to their full first-shift capabilities yet, but they plan to be sometime this winter, providing much-needed throughput capacity for expanded hog production. Daily slaughter totals set a record the last week of September, but those likely will be topped as hog numbers increase seasonally this fall. That could not have happened without these new plants. 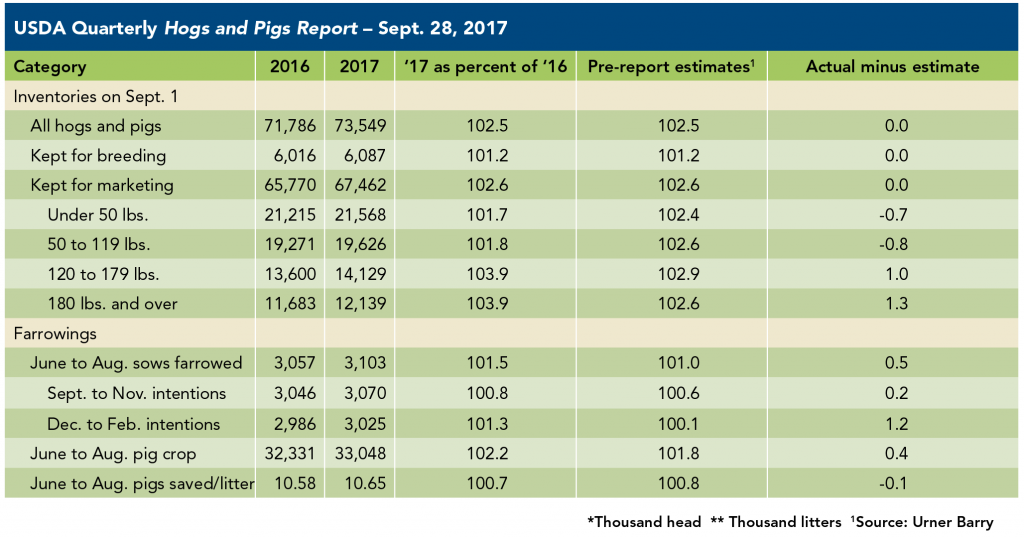 My model of farrow-to-finish costs indicates that the low-cost 10 to 15 percent of U.S. producers will have costs in the $62/cwt carcass range this year. As of late September, those producers can lock in costs for 2018 at levels only slightly higher than that figure.

While exports are critically important to the U.S. pork industry, domestic consumers purchase roughly three-
quarters of all U.S. pork production. This demand is a critical component of total pork demand, and thus wholesale pork and hog demand.

Consumer-level pork demand, which includes both retail and foodservice components, reached near-record highs in 2014 and 2015. Real per capita expenditures (RPCE) for pork – our chosen metric for the condition of U.S. pork demand – and pork’s demand index (a related metric) declined from their 2014-15 outlier levels in 2016 and struggled somewhat in early 2017.

Pork RPCE, however, has shown some strength as the year has progressed. Monthly RPCE totals were more than 10 percent lower than in January and February 2016, but they have been near year-ago levels since then and actually exceeded the 2016 level in July, the most recent month for which complete data are available, by 4 percent. RPCE for pork has been higher than its average over the past five years in four of the first seven months this year.

No analyst that I know of had 2017 U.S. pork exports anywhere near as large as they were from January to July. USDA’s Economic Research Service was about the most bullish at the beginning of the year with a forecast of 4 percent growth. I was in that camp as well. Through July, total U.S. exports are up 10 percent from last year.

The weakening of the U.S. dollar against the currencies of both competitors and customers has been key.

This year’s weakness is, like the magnitude of export growth, a surprise to virtually everyone. Fiscal and monetary policy expectations at the beginning of the year suggested a stronger, not weaker, dollar yet the dollar has declined about 12 percent versus dollar index futures.

High wholesale prices this summer offset much of the exchange rate gain and July exports were nearly 4 percent lower than last year. But lower pork prices this fall bode well for exports as stronger currencies of our customers – most notably Mexico’s – will make U.S. products a bargain.

Will the 2017 Trends Continue?

Some will and some are more questionable.

The only thing that will derail low feed costs is weather, and drought will return somewhere eventually. A drought in either the U.S. or South America will likely push corn into the $4 range and soybean meal into the $400s – not good but certainly not a disaster. It will take two such crop failures to drive costs sharply higher.

Production growth will continue until the producer sector suffers significant losses, and that is not likely based on the September Hogs and Pigs Report. Late-September corn, soybean meal and lean hogs futures imply profits of $17-plus per head for the best producers and $10 or so per head for average producers in 2018. Only losses stop growth.

Domestic demand will remain strong as long as the economy remains strong. That doesn’t mean demand will grow significantly, but it won’t be a problem, provided we avoid a recession. Consumer expectations and social issues will still be a challenge, but total per capita protein consumption will set a new record in 2019 and likely at a very healthy retail price.

This year’s export trend is the shakiest of the four. Current trade tensions could result in less access to key markets or, at least, strained relationships that might result in lower purchases. Even cursory inspection of recent data indicates that Mexico is the only growth market among our major customers.

China holds much potential. However, the roadblocks to export growth to China are significant. The EU is once again the largest pork exporter in the world and will remain a significant competitor for the foreseeable future.