From city to country, chefs love ham for its crave-worthy flavor. “Ham is full of umami and delicious – it’s the perfect way to satisfy consumer demand for on-trend, authentic dishes,” said Stephen Gerike, director of foodservice marketing and innovation for the National Pork Board. Ham really does it all, from sandwiches to shareable small plates to glazed ham steak entrees. And with falling commodity pricing, this is a big opportunity for operators to increase their bottom line and make ham happen on their menu. The fresh leg of pork, separated from the loin at the sirloin end and down to the trotter or hind foot, is known as a fresh ham or “green ham,” meaning uncooked – though the term “green ham” is understandably not used often outside the meat industry. It’s a large primal and it can be daunting to think about using it whole. That’s why fresh legs have historically been cured and smoked for long preservation – making that salty, sweet and smoky ham that everyone loves. The fresh leg is an amazing piece of meat that’s home to a variety of muscles that can be used as you would many other fresh pork cuts. When each muscle is approached individually, it offers the raw material to create multiple menu items using different cooking methods. Once the trotter, shank and skin are removed, the leg is composed of four distinct muscles: the inside muscle (similar to a top round), the outside muscle (like a bottom round), the eye muscle and the knuckle. See a fresh leg fabrication in action here and a breakdown of the fresh leg muscle cuts:

Much like the muscles in the shoulder, the leg muscles are used for locomotion as opposed to the postural muscles like the loin and belly. More energy is used in these muscles, so they have the potential for a higher pH, making them more moist and juicy when cooked. Each of the four muscles has characteristics that offer unique eating qualities:

Now, let’s discuss traditionally cured and smoked hams. The two most recognized ham types are country (dry-cured) hams, and city (wet-cured) hams. Country hams are rubbed with salt and cured in a temperature- and humidity-controlled environment, letting the ham to slowly dry and age without spoiling. Some country hams are salt-cured and then hung for a minimum of 100 days after which they are cooked in simmering water. The wet cured or city ham is submerged in or injected with a water solution of salt and sugar, and then hot-smoked until fully cooked. All cured and hot smoked ham is fully cooked, so there’s no need to heat unless it’s going to add new dimension to the dish. Making your own ham is simple – explore great recipes on our site, like this one from Chef Jason Alley: http://www.porkfoodservice.org/recipe/ham-cheese-and-pickles/#.WNwDfeF1oS8. He buys BRT (Boned, Rolled and Tied) fresh hams, which offer all four major muscles ready to separate and cure or cook. Whether using fresh leg muscles, buying cured and smoked ham or make your own, nothing makes it easier to take a dish to the next level. Ham is like ketchup – it has the perfect balance of sweet, salty, sour and bitter all in one package. See how chefs are using ham to easily add flavor on flavor on flavor to their menus. 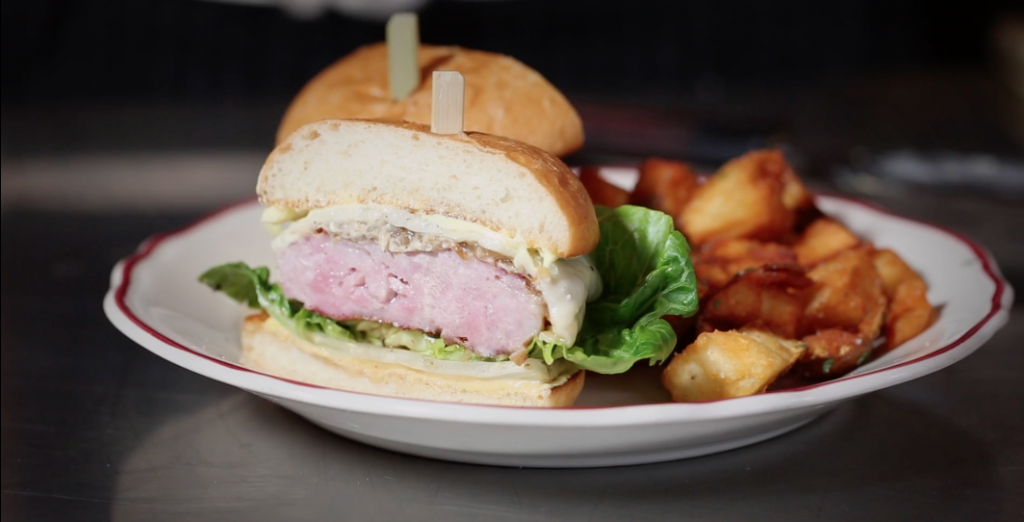 Chef Chris Cosentino of Cockscomb and Boccalone Salumeria in San Francisco, CA just opened his first Portland, OR restaurant. Jackrabbit combines his creative approach with Portland’s grit and character, and the menu features pork prominently – including the “Ham” Burger made with a ham patty, and served with caramelized onions, Gruyere and Dijon. If you’re looking for even more pork, order the shareable pig’s head or the 3 Little Pigs appetizer with country ham, porcini-dusted “porkcorn” and “trottertots.” 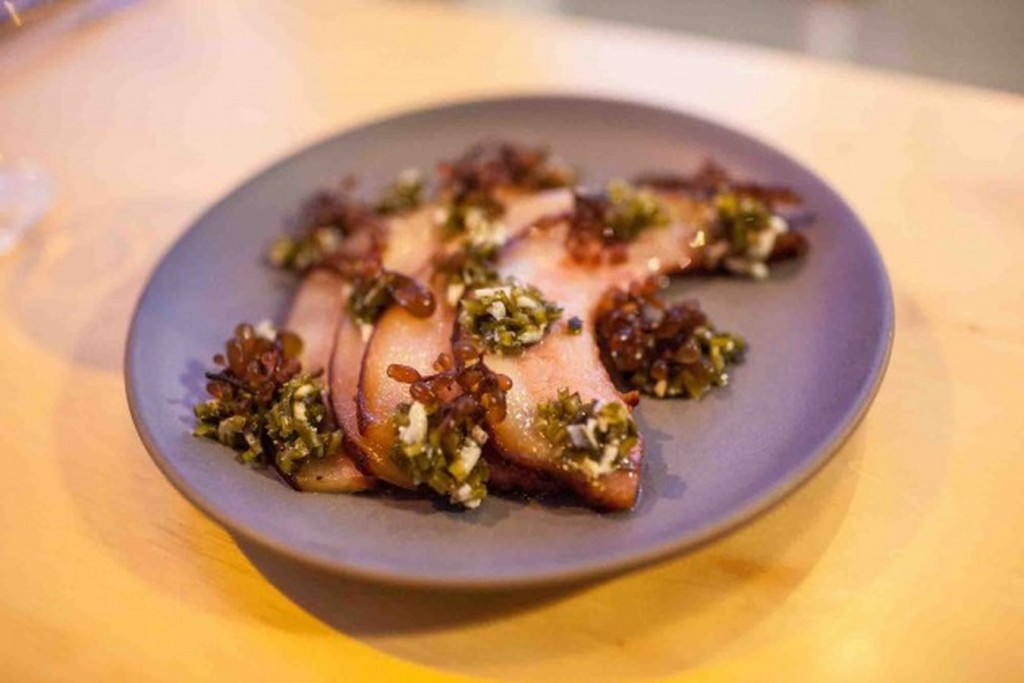 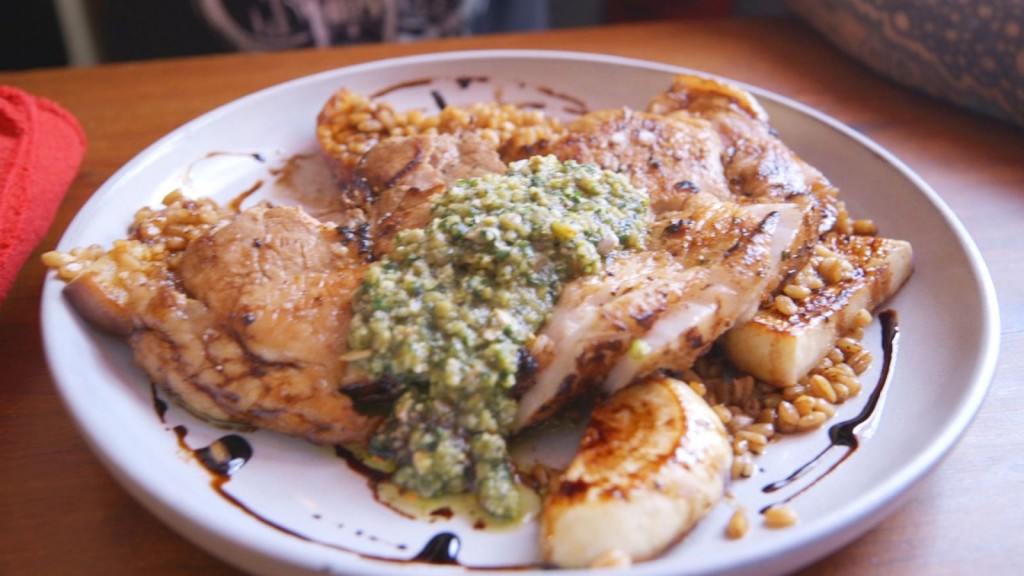 At Grindhaus in the Red Hook neighborhood of Brooklyn, NY, Chef Kevin Speltz serves a shareable Pig Steak. The pork is sourced from Red Hook’s own Fleisher’s Craft Butchery, seared to medium-rare and served with onions, peppers and lotus root. Fleisher’s custom-cuts the Pig Steak from the fresh leg specifically for Grindhaus.

At Philadelphia’s Rex 1516, Chef Justin Swain delivers elevated Southern cuisine with a modern twist. His Honey Mustard-Glazed Berkshire Ham is house-cured and served with Carolina gold rice cakes, succotash made with onions, corn and fresh fava beans, and smoked chicken jus. Or stop by for brunch and get the pork belly-topped Shrimp & Grits with jalapeño-Cheddar sauce. 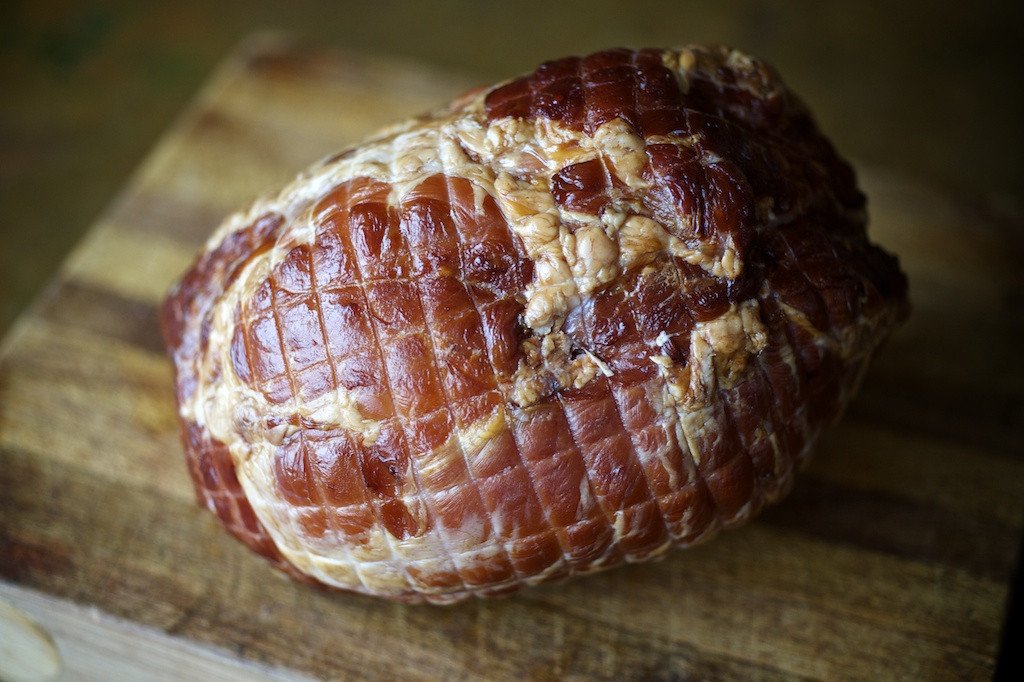 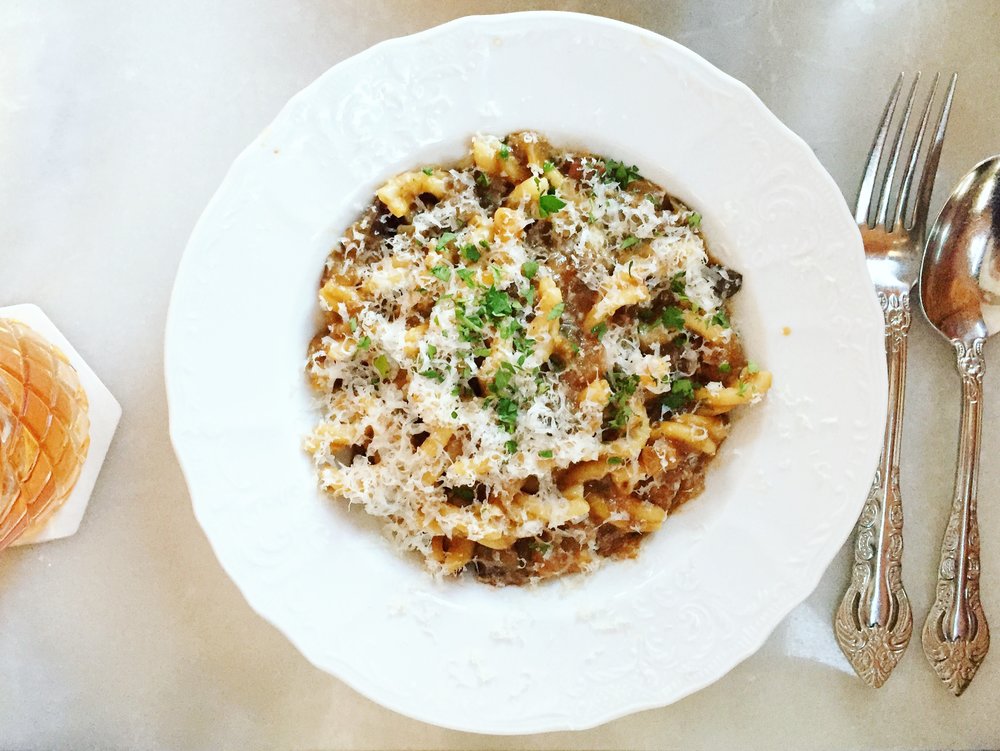 In Davidson, NC, Chef Joe Kindred and wife Katy have created a unique restaurant with Southern charm and a globally stamped passport. Kindred’s ever-changing menu features a range of dishes, including Ravioli with country ham, fonduta and pea shoots, and an open-faced lunch sandwich made with house-cured ham, Gruyere, black mustard, greens and shallot. Another rotating item is the Strozzapreti with country ham ragù, eggplant, chiles en adobo and vanilla bean.