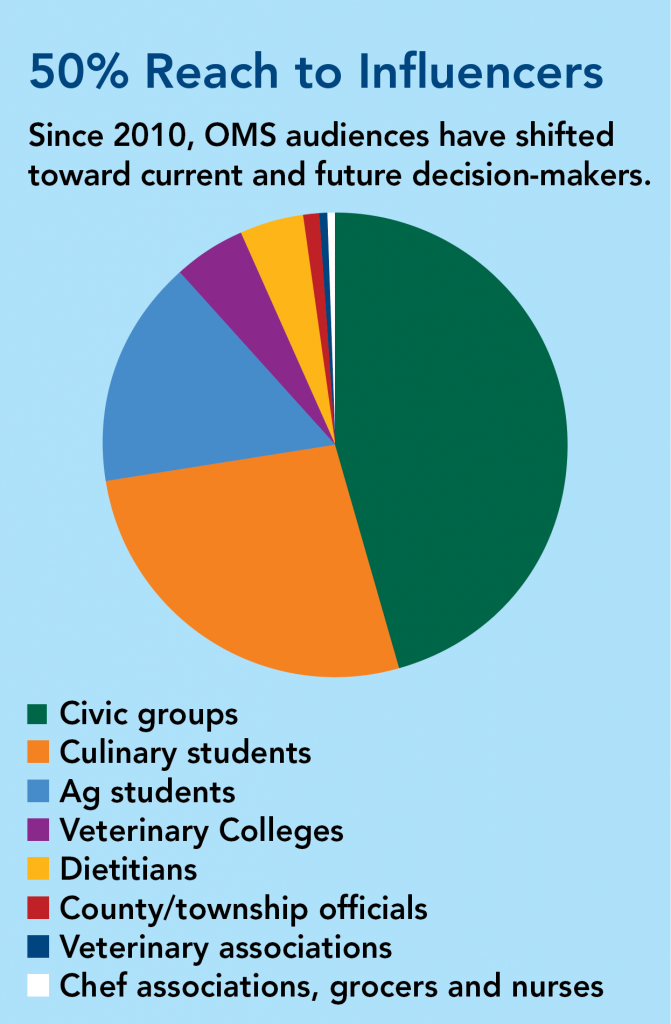 What about GMO corn and pigs? Why do pig farmers use antibiotics? What happens to manure?

What if you had to answer tough questions like these? That is exactly the kind of challenge the Pork Checkoff’s Operation Main Street (OMS) volunteer speakers do not shy away from. In fact, OMS speakers – from pig farmers to veterinarians – actively seek new audiences, including key influencers such as dietitians, chefs, grocer associations and nurses.

In July 2017, Steve Brier took the pork industry’s message to one of the Pork Checkoff’s top targets to build pork demand – grocers and wholesalers. The Nevada, Missouri, pig farmer was a featured speaker during the Missouri Grocers Association Showcase and annual meeting, which included representatives from national wholesale groups and leading supermarket chains.

“This was the best OMS audience ever for me in terms of impacting pork sales,” said Brier, an OMS speaker since 2005 who has given 64 presentations.

In his presentation, Powering Meatcase Profits, The Pork Partnership, Brier demonstrated how pig farmers are building consumer trust and increasing satisfaction with pork. The program offered a unique learning environment where attendees asked about:

His remarks paid off, with the meeting organizer sending a note of appreciation:
“Thank you so much for speaking. My colleagues were very impressed. Who knew you can cook pork just like a steak with a little pink in the middle?” 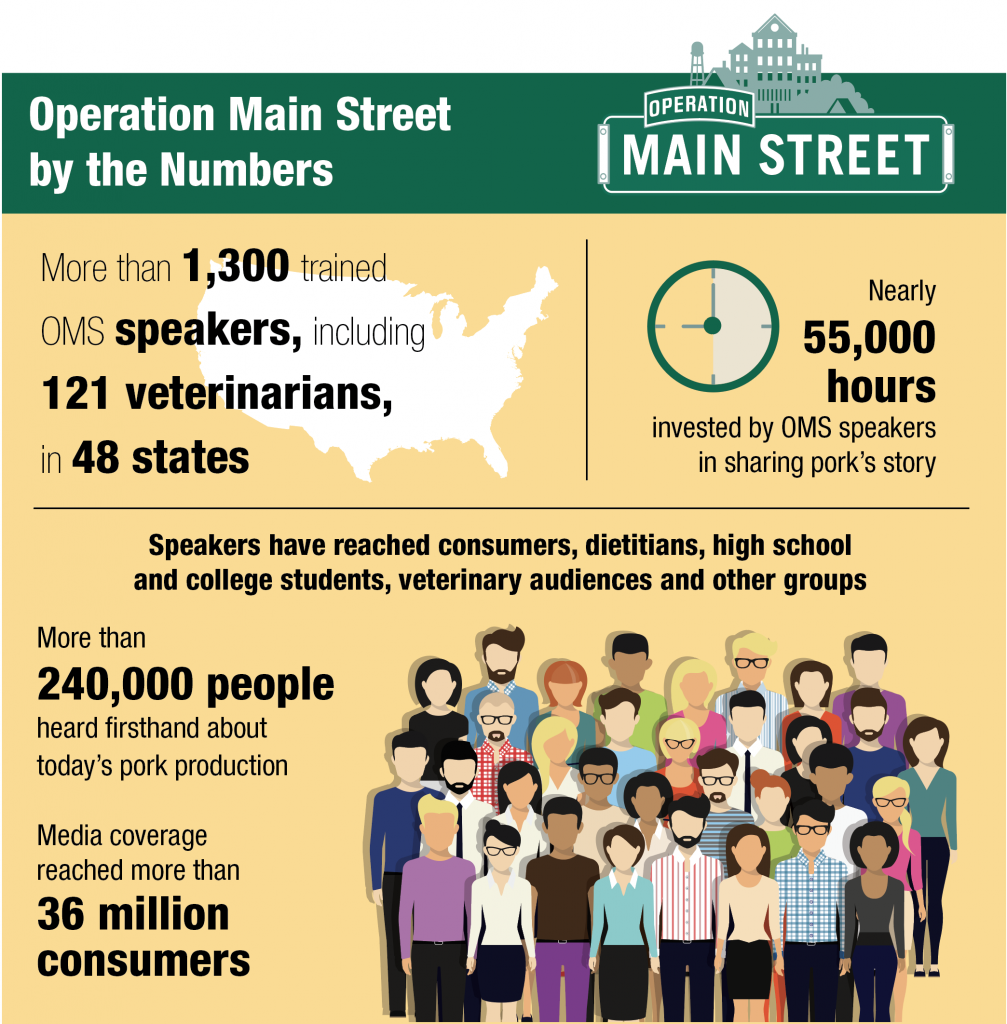 Success stories like this highlight the power of OMS, which keeps expanding to more speakers, more training and more audiences.

Launched in 2004, OMS is a volunteer-driven program that has evolved into a national (48 states) outreach effort to share the pork industry’s story. The program also has also evolved from reaching local civic groups to expanding to high-priority influencers, including dietitians, nurses, veterinarians, medical professionals, chefs, grocers and wholesalers.

In 2017, almost 50 presentations had been scheduled to audiences of high-level influencers. They in turn share what they learn with their audiences, such as patients, clients and customers.

“These audiences are hungry for pork information, and OMS speakers are eager to oblige,” Barnes said. “From the start, we’ve been thoroughly impressed with the willingness of farmers and veterinarians to volunteer time to OMS.”

He noted that 83 percent of OMS speakers live in the top 12 pork-producing states, but only 23 percent of the U.S. population resides there.

“OMS speakers are dedicated to reaching beyond their communities to share pork’s story.”

Get Involved…The Checkoff is always looking for OMS speakers, especially on the coasts and in the Southeast and Southwest. For details, call: (800) 456-7675

Participation of swine veterinarians has played an integral part in the OMS program. The American Association of Swine Veterinarians (AASV) lends its support by including OMS training at its annual conference as a breakout session.“Through July, 121 veterinarians had completed OMS training,” said the Pork Checkoff’s Ernie Barnes. “That’s one in seven AASV veterinarians. Audiences trust information from these professionals.”

Another welcome trend is that more women are OMS speakers. While they have played a key role since the program’s start, an increasing number, including farmers and veterinarians, are participating. Today, 41 percent of speakers are women, with 60 percent joining since 2011.

“This reflects today’s pork industry,” said past National Pork Board President Jan Archer, Goldsboro, North Carolina. “Women are more involved in farming, and naturally it is important to us to provide accurate information to the public to counteract inaccuracies that swirl around pig farming.”

That’s how OMS speakers responded when the possibility of reaching out to dietitians was broached. These nutrition professionals have proven to be ready audience when it comes to learning more about how pigs are raised today.

Over the last six years, OMS volunteers have given presentations to more than 250 dietitian groups primarily in pork-producing states. However, OMS speakers are now taking their message coast to coast.

“Dietitians are concerned about the quality of their food,” said Mary Kelpinski, an OMS speaker from East Lansing, Michigan. “The amount of care farmers give to their animals surprises them, but they get it quickly.”

“There are many questions about how animals are raised, including about antibiotic use,” said OMS speaker Karen Richter, an OMS speaker and Montgomery, Minnesota, pig farmer.

“But dietitians are surprised and receptive to correct information, such as the fact that pork is hormone-free,” Richter said.

To connect with any audience, from dietitians to nurse practitioners to grocers, OMS speakers agree that the key is simple – tell your farm story.

“Explain how you do things, what your farm looks like and how pigs are treated,” said Jeff Harker, DVM, an OMS speaker from Frankfort, Indiana. “Audiences like hearing personal stories about raising pigs.”