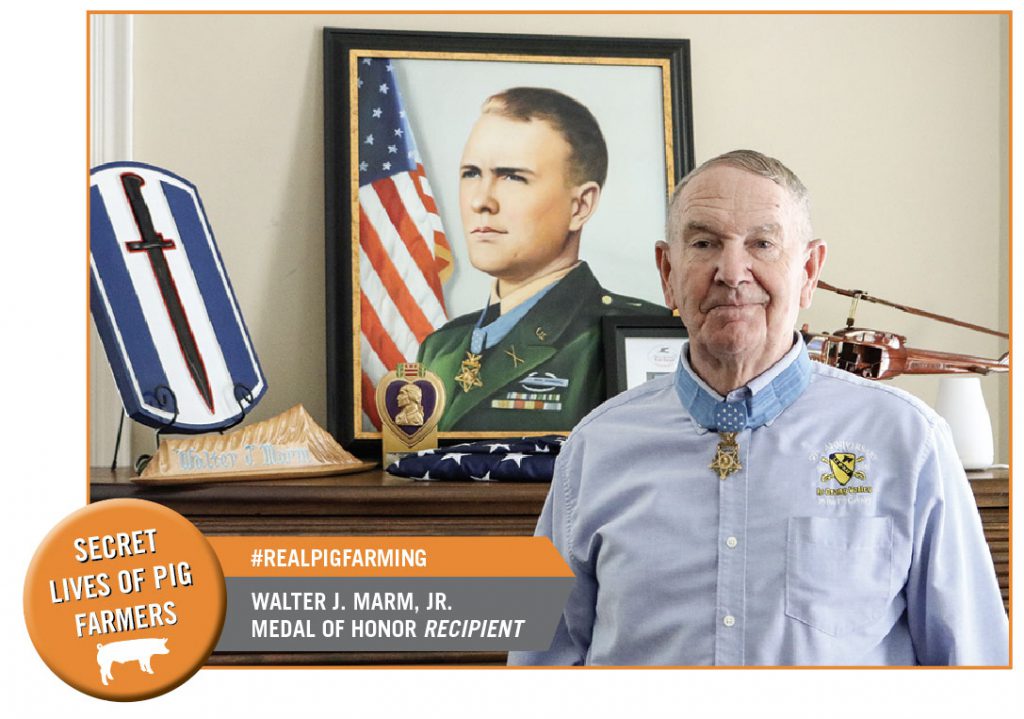 While urban consumers enjoy bacon, pork chops and other pork products, most have never met a pig farmer. Earlier this year, the Pork Checkoff launched a new video series to remedy that. The Secret Lives of Pig Farmers videos can be found on the Checkoff’s #RealPigFarming YouTube channel.

“Consumers are not only asking about how pork they buy is raised, but they also want to know about the farmers who produce the food they serve their families,” said Claire Masker, director of public relations for the Checkoff. “These videos share powerful human-interest stories that connect consumers with America’s pig farmers.”

Take Walter Marm, the subject of the first Secret Lives of Pig Farmers video. This Medal of Honor recipient’s remarkable story began far from the farm on a mountain in Vietnam in the 1960s.

“I was in the first major battle of the Vietnam War,” said Marm, a U.S. Army veteran who raises pigs today with his family near Fremont, North Carolina. “For awhile we thought we were in another Little Big Horn – surrounded and outnumbered.”

He served with the 7th Cavalry at Chu Pong Mountain, where a unit from another company was trapped.

“We made two attempts to get to that platoon, but we were stopped by intense fire,” Marm said. “I told my men, ‘Hold your fire!’ and ran across 30 meters of open terrain so I could get into position and throw a grenade over the top.”

As Marm prepared to lead his men to rescue the platoon, shots rang out and a bullet shattered his jaw. He was later evacuated by a helicopter delivering more ammunition to the U.S. Army troops.

“Serving our country is very important,” said Marm, who got involved in raising pigs after 30-plus years in the military. “Learning to farm made me appreciate the hard work farmers do. The farming community is just like the military – it’s something Americans need.”

Other pig farmers featured in the series include Iowa’s champion baker Cristen Clark, runner and Olympic medal winner Clayton Murphy, who grew up on an Ohio pig farm, and North Carolina’s Henry Moore.