Recap of this Year’s Pork Crawl 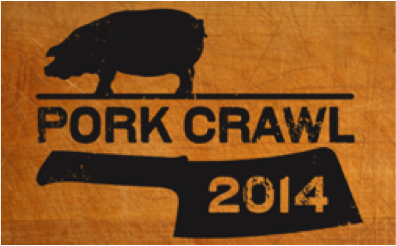 It was clear from our first meeting that Jose Enrique was a chef we wanted to know better. We met at the 2013 Food & Wine Classic in Aspen, and his enthusiasm for all things pork was a perfect fit for National Pork Board events. Jose Enrique joined us at our 2014 Pork Summit in Napa Valley as a demo chef, and after four days of tasting his unique take on Puerto Rican food, talking about the importance of pork in his culture’s cuisine and getting a better understanding of the San Juan food scene, our choice for the 2014 Pork Crawl location and host was obvious.

The Pork Crawl kicked off on October 9 with the arrival of fourteen national foodservice media editors to Hotel El Convento in Old San Juan. After hellos and a cool glass of sangria we boarded vans and headed to the St. Regis Bahia Beach Resort for a caja China welcome reception. Jose Enrique greeted editors alongside Pedro Álvarez, owner of AlCor Foods Inc. and former sous chef at Jose Enrique. Everyone enjoyed drinks made with local juices and rum in the large palm tree-covered backyard of the perfectly appointed estancia (residence). 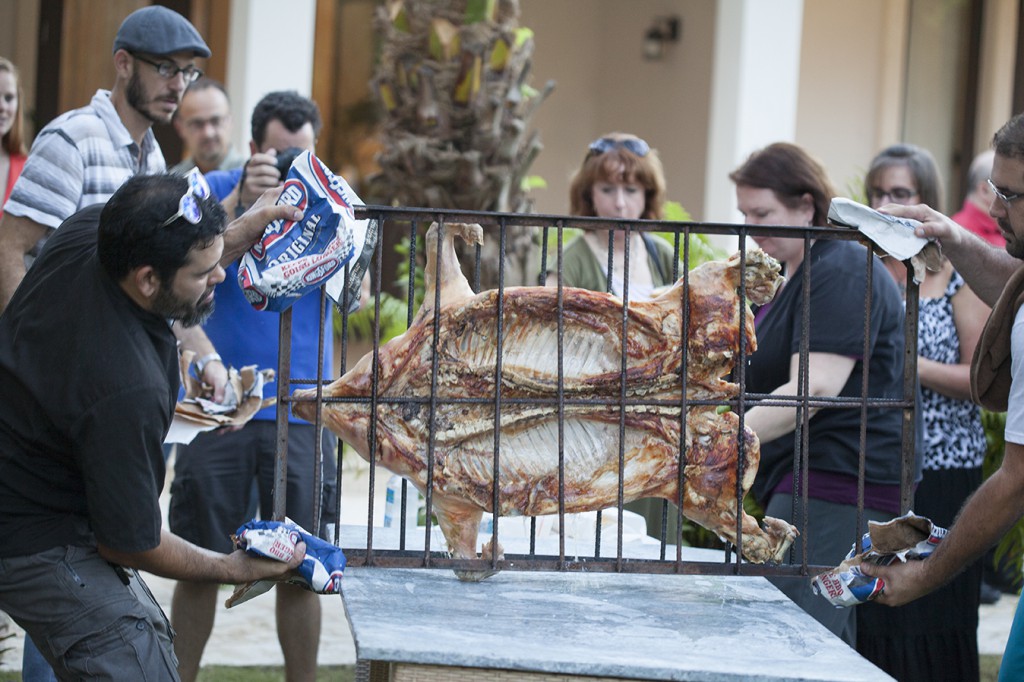 The 50-pound, brined, pig had already been roasting in the caja China box for hours when the editors arrived – just in time for them to watch Jose and Pedro flip the pig for even doneness and crispy skin. The editors enjoyed witnessing the technical elements of the cooking process, but the best part was sopping up the delicious roasted juices with pan de agua, a local Puerto Rican bread. The pig had another three hours, so cocktails and stories continued while Pedro served his longaniza sausage, a local favorite with achiote derived,vibrant red-color.

Once the pig was finished, we got our first bite of the perfectly roasted amber-colored skin. The rich, salty bites were addictive! The pig meat was pulled and attendees were invited to make their own sandwiches. A Puerto Rican tradition, the sandwiches start with a sturdy slice of pan de agua topped with roasted meat, pieces of crispy skin, pickled red onion, Puerto Rican avocado (different from the Hass avocado common state-side), a squeeze of lime, a sprinkle of farmer’s cheese and Jose Enrique’s house-made pique (hot sauce). On the side, Jose and Pedro served rice, beans and sweet roasted plantains. The food had people coming back for seconds, thirds and even fourths. The evening was a perfect introduction to Puerto Rican food and hospitality, and the editors went home excited for the next day’s activities. 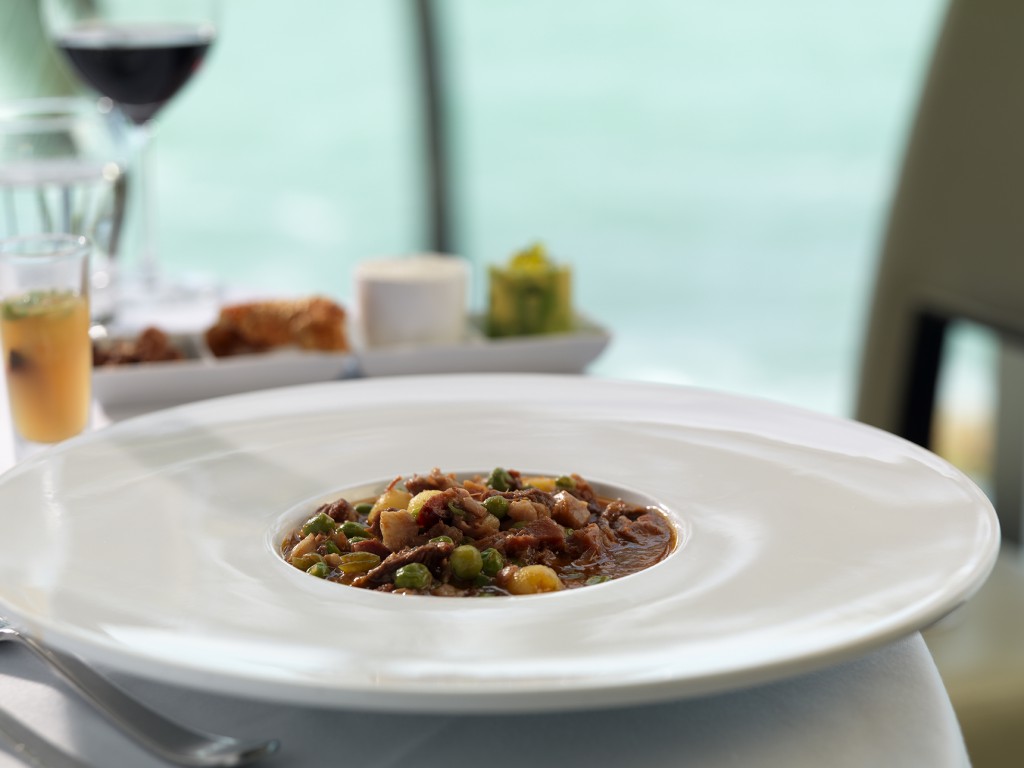 October 10 kicked off with a traditional Puerto Rican breakfast at Hotel El Convento. Attendees started the day with strong coffee, fresh local juices, traditional Puerto Rican pastries, scrambled eggs with sweet ripe plantain mash, longaniza sausage and Sancocho – a pork stew traditionally served by locals as a hangover cure. Then everyone set off to explore Old San Juan on their own before the Pork Crawl started in the early afternoon.

The goal of the Pork Crawl is to introduce editors to where locals eat and to meet interesting, innovative and inspiring chefs, restaurants and pork dishes – and the first stop certainly delivered. Chef Wilo Benet of Pikayo served Fricase de Patitas y Cachetes de Cerdo, or Stew of Pigs Feet, Ham Hock and Pork Cheeks. Traditionally a rustic dish, Chef Benet elevated the ingredients to perfectly fit his Condado-located fine dining establishment. Paired with a glass of his DOBLEÚ wine, white rice, avocado salad, and a version of pique with the addition of bili, (a local fruit called quenepa, soaked in rum) the dish truly shined. 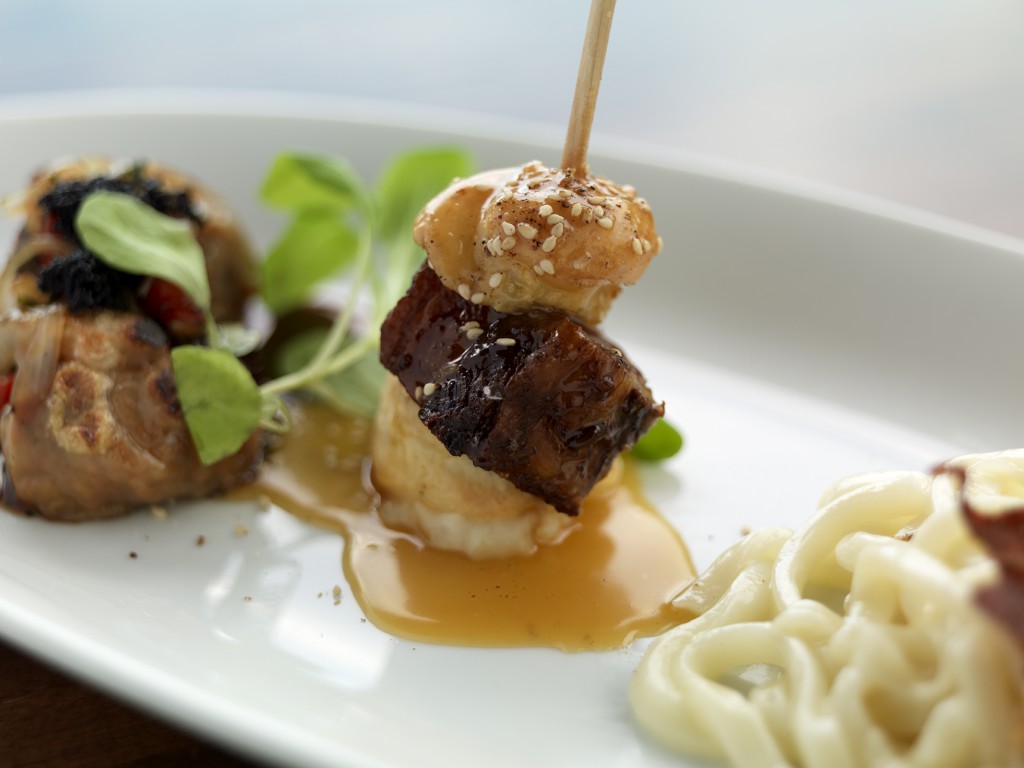 After a short stroll down the Condado strip we arrived at Chef Roberto Treviño’s Asian-Latino fusion restaurant, Budatai. Seated outside with a light breeze and a lovely view of the ocean, attendees were ready for more pork. Chef Treviño started with “the bling of Puerto Rico” – chicharrón – nestled into Chinese takeout boxes and served with spicy garlic chili sauce similar to Sriracha. Next up was a trio of bites including Pork Amarillo Dumplings (with ground pork and sweet plantains), a Pork Belly Profiterole with Szechuan Salted Caramel and Spiced Jerked Pork with Sake Butter Udon. The deliciously unique food was paired with Budatai’s refreshing take on a mojito – rum, lime and mint topped off with some bubbly. 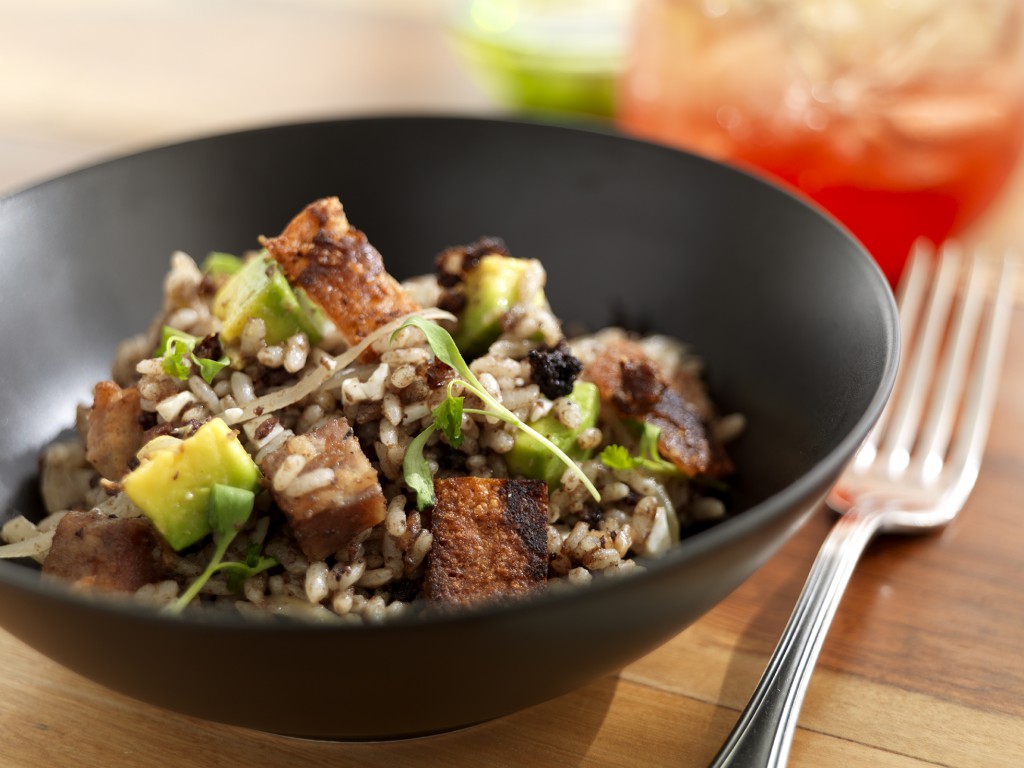 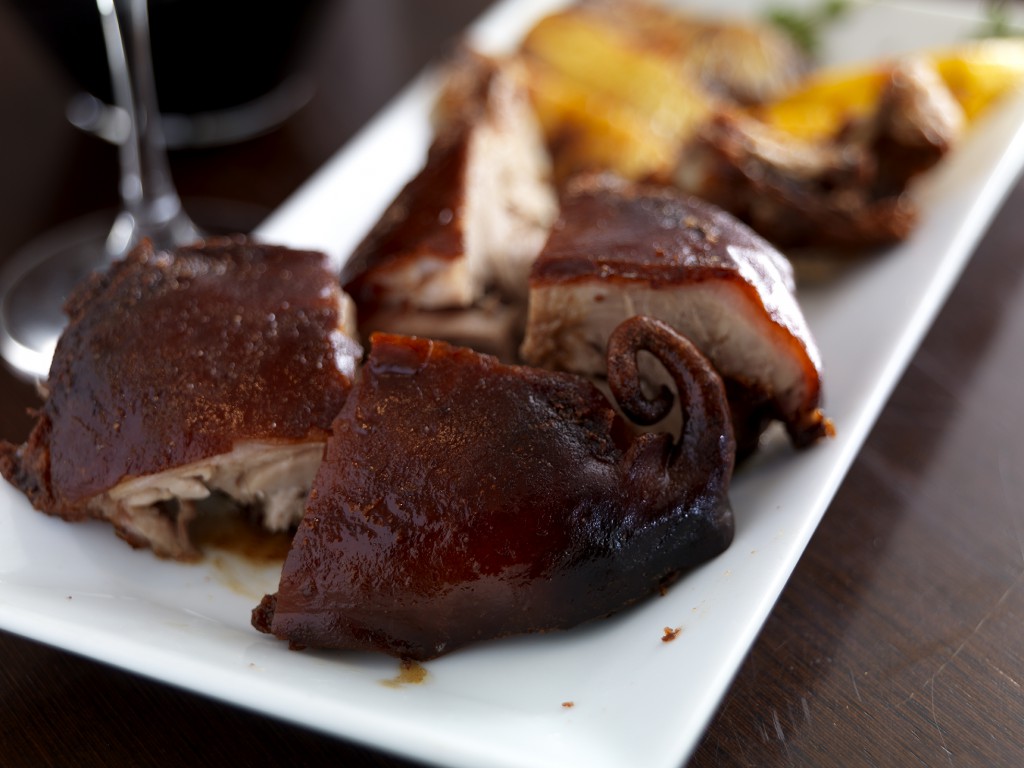 Stop number four, Bodegas Compostela, has been an Island staple for 32 years. The Galician restaurant has the best Spanish wine collection on the Island, and editors were greeted with glasses of Viña de Martin Os Pasás – a Spanish blend of Treixadura with Lado, Albariño, and Torrontes ­– poured expertly by co-owner and front-of-house manager Maximino Rey. Chef José Rey (no relation) sent out a Queen snapper tartare to cleanse attendee’s palates and whet appetites for more pork. Following the fish dish, he served Roasted Suckling Pig with grilled pineapple and mango. The crisp skin and tender meat paired impeccably with a glass of 2008 El Castro de Valtuille Mencia from Northwest Spain. 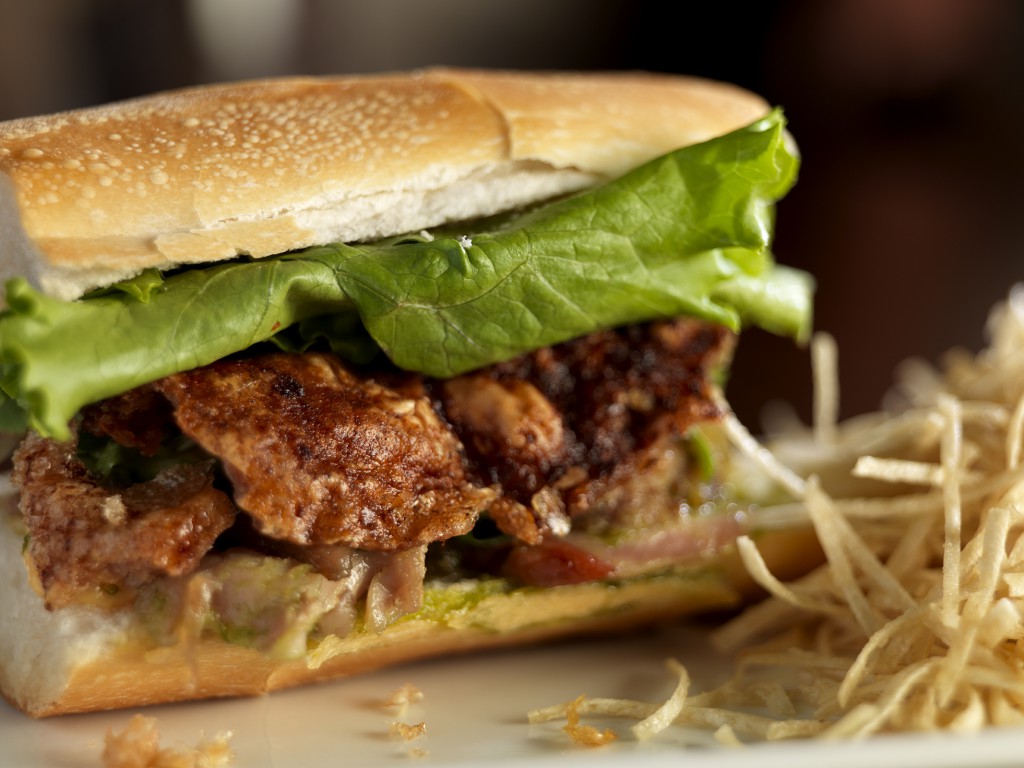 The following stop in Santurce was Santaella, where Chef José Santaella transformed an old hardware store into one of the most rustically modern restaurants on the Island. Chef Santaella served Emparedado de Lechón con Jalea de Pina, or a Pork Sandwich with Pineapple Jam. The dish was inspired by traditional Puerto Rican pork sandwiches, but in execution the sandwich was reminiscent of a bánh mì. Featuring pineapple jam and spicy mayo the sandwich had a perfect balance of acid and heat clearly influenced by the chef’s travels to Southeast Asia. Santaella paired the sandwich with a beautifully garnished cocktail of muddled pineapple, Don Q, Ron del Barrilito, lime juice and bitters. 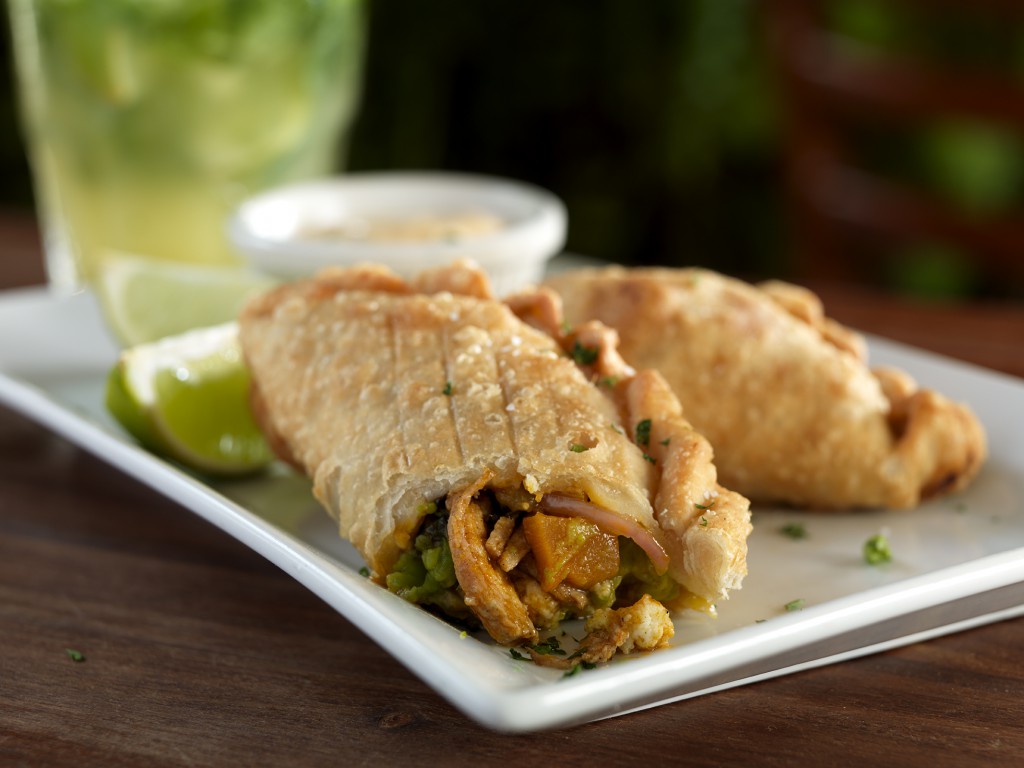 Five stops down and we still wanted more pork! Jose Enrique guided attendees through the Santurce neighborhood and market, past playing bands and salsa dancing couples, to his eponymous restaurant. The party happening on the streets carried into the standing-room-only restaurant. As we sipped Medallas and fresh coconut water with rum, Chef Enrique delivered Pork and Chorizo Turnovers topped off with a heavy dose of his pique. Next up was a Cuajitos, a pork stomach stew, surprisingly light and full of spice and seasoning. Everyone ate standing up and attendees mingled with locals, getting a full understanding of the Puerto Rican passion for good food and fun! We headed back to the hotel with happy stomachs, ready to explore more pork the next day. 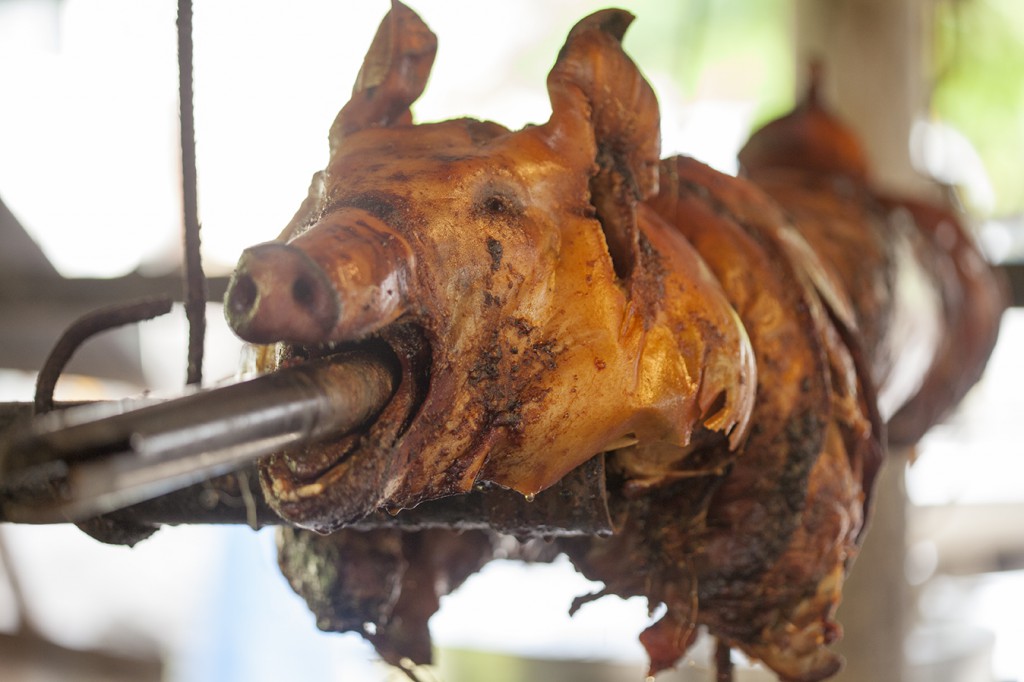 Puerto Rico’s Ruta de Lechón (Road of Roasted Pork) is legendary among locals and foodies alike. Found in the otherwise nondescript area of Puerto Rico called Guavate, the road is peppered with Lechoneras, rustic roadside eateries that specialize in lechón, or spit-roasted suckling pig. The Ruta is a pork-lovers Mecca and therefore was a can’t-miss stop for Pork Crawl attendees. So on Saturday, October 11 we boarded vans and headed inland for a day of authentic eating. 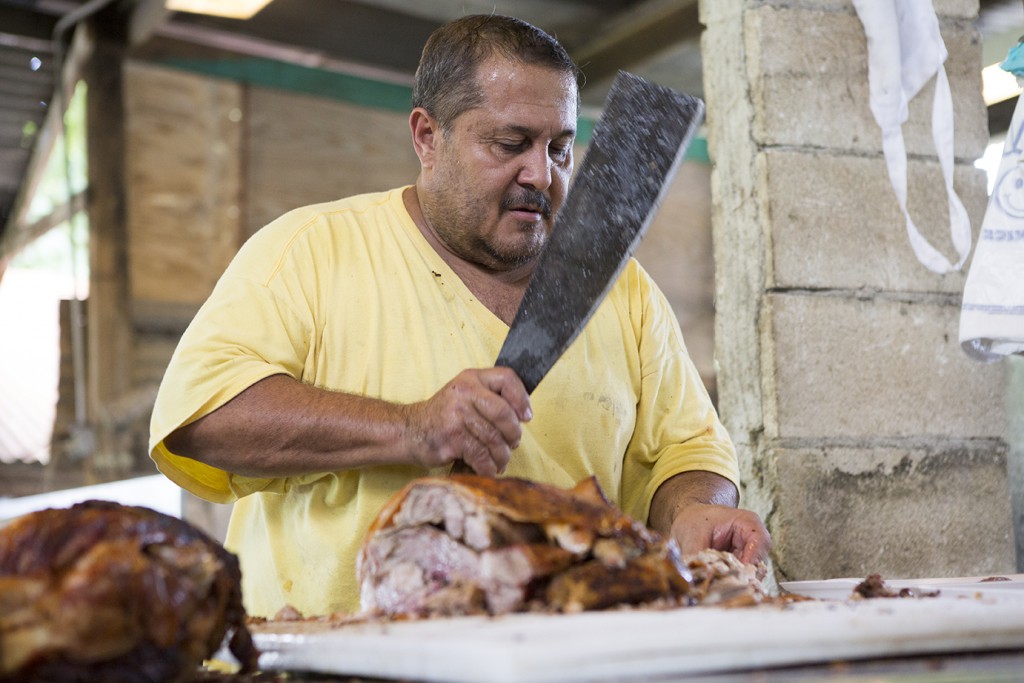 Our first stop was La Ranchera Lechonera, known among locals as just “Apa’s,” after the location’s renowned pitmaster. Any chef on the Island will tell you that this is the place to go for spit-roasted pork. Luis “Apa” Ramons is a third-generation pitmaster who took over his father’s business in 1985. He starts with a 3-month old pig and rubs it with a mixture of garlic, salt and aji dulce (a sweet pepper in the scotch bonnet family) culantro (long cilantro indigenous to the Island), and oregano, then lets it marinate for up to two days. Then the pig is secured to a spit and slowly roasted over charcoal made from three kinds of Puerto Rican hardwood. After five or six hours the pig is done and locals stop by to purchase it by the pound. On a busy day during holiday season, Apa can sell as many as 100 pigs. Puerto Rico takes its lechon seriously! 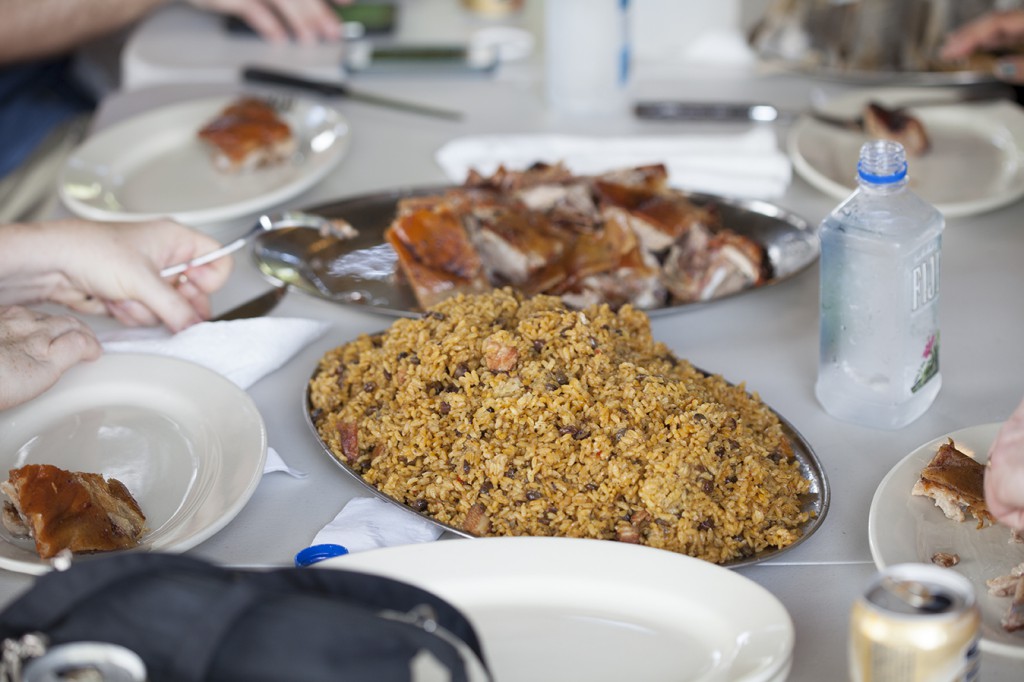 Pedro Álvarez, was our guide for the Ruta De Lechón. He made arrangements for us to sit down and have a meal at Apa’s. In addition to the succulent pork and crispy skin, Apa and his team prepared side dishes, including arroz con gandules, arguably the best rice and beans in Puerto Rico, boiled green bananas, fresh avocado, local root vegetables, morcilla (blood sausage), potato salad and pasteles – a local dish similar to a tamale. It was all washed down with ice cold Medalla, passion fruit juice or coconut water. 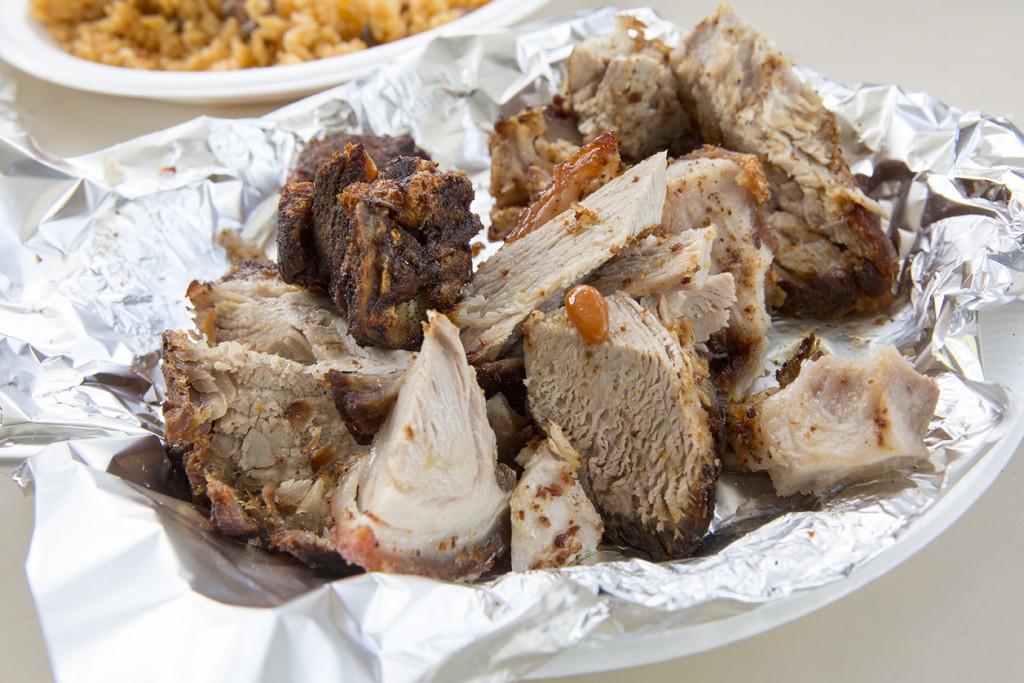 Originally we planned to head to another lechonera after Apa’s, but we ate so much that we switched the plan and headed up the trail to the town of Guavate. We strolled through the streets, sipped on coconut frappes and took in the local culture. Live music played and local families ordered lunch from one of the many lechoneras in town. A little walking and exploring did the trick and attendees were ready for the last stop of the Pork Crawl. We boarded the vans and headed halfway down the Ruta de Lechón to Rancho Vega, a small lechonera that specializes in carne frita, or fried pork chunks. The meat is marinated and then fried to perfection – crunchy on the outside and savory on the inside. It was served with rice and beans, local root vegetables and housemade pique. A fitting last stop to a three-day Pork Crawl adventure!