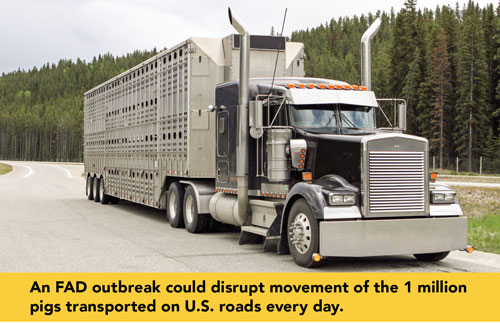 Imagine if a foreign animal disease (FAD) outbreak occurred near your farm. Movement of susceptible livestock would cease immediately, and you couldn’t transport hogs to market or receive new pigs without permission from state officials.

Consumer confidence would falter, and export markets would close immediately, slashing demand for U.S. pork. The upshot? You would face a serious risk of lost revenue. How would you and other producers ensure the business continuity of your farms?

To address this scenario, the Pork Checkoff helped create the Secure Pork Supply (SPS) plan and recently allocated $1.6 million for its further development.

“Business continuity revolves around being able to move pigs to processing and other production premises.”
– Patrick Webb, DVM, Pork Checkoff

“Producer interest in the SPS plan has exploded in recent years,” said Patrick Webb, DVM, director of swine health programs for the Pork Checkoff. “Producers know it’s vital to be prepared to minimize the negative effects of an FAD outbreak on their business while the disease is being contained and eradicated.”

The size, structure, efficiency and extensive movement of livestock of the pork industry present unprecedented challenges in the event of an FAD outbreak such as foot-and-mouth disease, classical swine fever or African swine fever.

“There are a million pigs on the road every day being transported to the next stage of production or being shipped to packing plants,” Webb said. “Business continuity revolves around being able to move pigs to processing and other production premises.”

Business continuity also involves market access. Not only could an FAD outbreak harm the domestic pork industry, it could devastate the export markets that play a growing role in U.S. pork producers’ profitability.

Rapid disease detection and response, coupled with a workable SPS plan, will be critical in managing an FAD outbreak and helping producers return to business as usual as quickly as possible.

“Time is of the essence with any disease outbreak, as we learned from outbreaks of the porcine epidemic diarrhea virus (PEDV) and the high-pathogenic avian influenza,” Webb said. “That’s why the Pork Checkoff is stepping up to the plate to implement the SPS plan.”

The concepts behind the SPS plan can be compared to the response following the Sept. 11, 2001, attacks, according to Webb. Just as airplanes were not allowed to fly over America until the extent of the crisis was determined, new shipments of hogs could be stopped in the event of an FAD outbreak until the full scope of the outbreak is determined.

A few days after Sept. 11, planes were allowed to take off again but only after new security measures were put in place.

“For our industry, livestock movement will be allowed to resume at some point following an FAD outbreak, but only after enhanced biosecurity and surveillance measures are implemented and movement permits are issued,” Webb said.

All this is part of the SPS plan, which reflects a multi-year collaborative effort by pork producers, pork industry leaders, academia and state and federal officials.

“The SPS plan has been developed with a lot of pork producers’ input, from state pork associations to the Pork Checkoff Swine Health Committee,” said Webb, who noted the program is voluntary. “The goal is to make this plan practical, workable and credible.”

The SPS plan will allow the safe movement of pigs with no evidence of infection in an FAD control area.

“These animals will be allowed, under a permit issued by officials, to be transported to processing plants or other sites to accommodate different stages of production,” Webb said.

The SPS plan, funded in part by the Pork Checkoff, is one of several plans supported by USDA’s Animal and Plant Health Inspection Service (APHIS). Others include the Secure Milk Supply program and Secure Beef Supply program. The egg and turkey industries also have been developing programs.

“Common components include risk assessments and enhanced biosecurity,” Webb said. “A lot of things the pork industry is doing already are part of the SPS plan.”

SPS planning started in 2011, with the first draft completed in 2013. Pilot projects in 2014 tested the plan, and it was revised in 2016 to incorporate lessons learned from the 2015 outbreak of high-pathogenic avian influenza in U.S. poultry and turkey industries.

The Pork Checkoff is working with the Center for Food Security and Public Health to create a step-by-step guide to help pork producers implement the plan. The guide is slated for completion in 2018.

“This is the ‘cookbook’ to help producers organize biosecurity efforts and enroll in the SPS plan,” said Webb, noting the SPS plan will continue to evolve as scientific knowledge advances.

In an FAD outbreak, state and federal incident command officials will make decisions guided by the unique characteristics of the specific disease outbreak.

“The pork industry will not be in charge but will play a supporting role to assist the federal and state officials,” Webb said.

To restrict movement in the area, officials will establish a control area at of at least 10 kilometers (about 6.2 miles), although the state veterinarian can enlarge it if necessary. The control area could also be defined on a county-by-county basis, Webb said. Livestock producers in the control area will face the most restrictions.

Several factors will determine if daily movement permits for feed trucks, manure hauling, etc. will be issued to keep the farm running. Business continuity permits also may be required to move animals off the site.

Answers to key questions will determine whether permits are issued: How confident are regulatory officials that animals on the site are not infected? How large is the outbreak? If the permit request involves moving pigs from one site to another, what is the disease status in the area the animals must pass through? Have animals been vaccinated? What about moving pigs that have been infected but have now recovered? 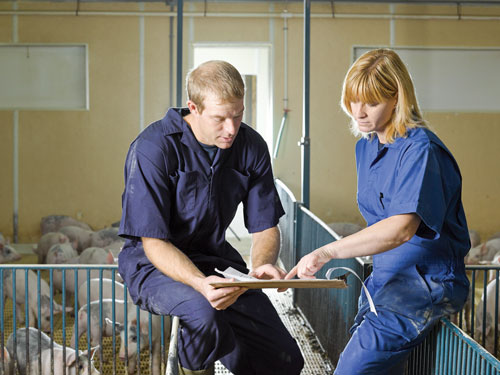 “There are things you can incorporate on your farm today to support the enhanced biosecurity efforts that will be required if there is a foreign animal disease (FAD) outbreak,” said the Pork Checkoff’s Patrick Webb, DVM, who offers these tips: