For the National Pork Board, 2017 has been a year where individual pieces of the puzzle to improve consumers’ overall pork eating experience have come together. Quality, new pork cuts nomenclature and a recommended lower endpoint cooking temperature are the keys to giving the U.S. pork industry needed momentum to boost domestic and international demand.
While all of the three paths to increase pork demand are important, consistency appears to hold the strongest case for moving the demand needle upward.

U.S. pork producers understand that to sell more pork, they must meet consumer demands for more consistent, high-quality products. Consumers base pork purchases on quality as defined by color, packaging and expiration date, and they will purchase pork repeatedly if their eating experience is consistent.

“The National Pork Board has been involved with producer-led meat-quality projects and initiatives for more than 25 years,” said National Pork Board President Terry O’Neel, Friend, Nebraska. “Our objective has always been to create more value to all segments of the pork chain by producing a better, more consistent product for all consumers.”

The emphasis on quality isn’t a new one for members of the Pork Checkoff’s Pork Quality Initiative Task Force. The producers, packers and academics in the group agree that the path forward must take several routes based on Checkoff-funded research.

The results show that consumers base pork purchases on pork color, packaging and expiration date. This is apart from the consumer taste and preference study that found shear force (measure of tenderness) and pH to be the two biggest contributors to eating quality.

Regardless of their selection criteria, Gripe says it boils down to consistency.

“If we can take out variation within pork cuts at the meatcase and provide products that result in positive eating experiences, it will drive repeat purchases,” Gripe said.

What’s in a Name?

Terms such as “Porterhouse pork chops” went from an aspiration to reality in 2015 with their appearance in the eighth edition of The Meat Buyer’s Guide®. This represented a breakthrough achievement for the North American meat trade.

Stephen Gerike and Patrick Fleming, both part of the Pork Checkoff’s Domestic Marketing team, played major roles in persuading the meat industry to literally rewrite its book on standard pork names. The goal was to use more common names that consumers were already familiar with. 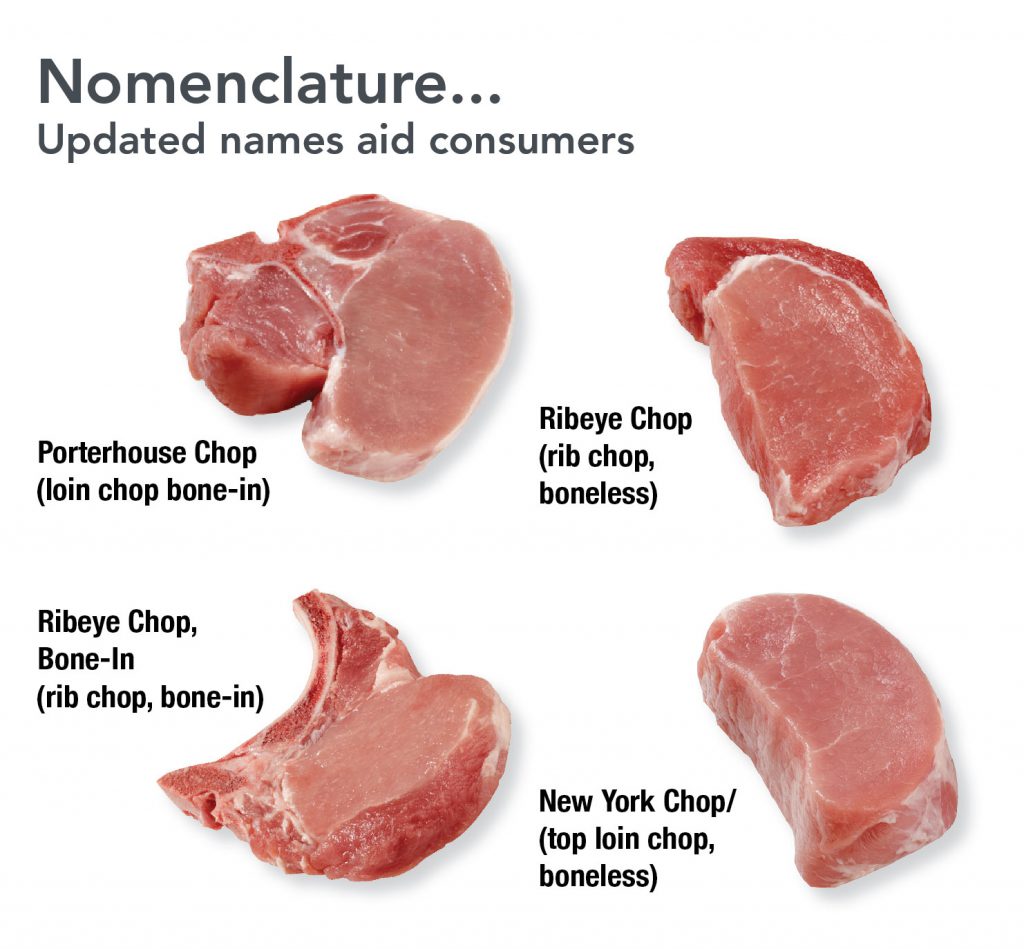 “With this change, specifically with Porterhouse pork chops, ribeye pork chops and New York pork chops, we’re seeing a change in the way retailers and restaurants talk about meat,” Gerike said. “Instead of featuring ‘assorted pork chop’ packages in the meatcase, retailers can promote specific pork cuts to help drive demand and add value to loin chops.”
O’Neel says the new nomenclature is a key step.

“The old names were confusing to consumers,” O’Neel said. “That’s why we wanted to choose new cut names to enhance the value of pork cuts.”

The Meat Buyer’s Guide®, published by the North American Meat Institute, is the universal meat cut reference for the United States, Canada and Mexico and is endorsed by 33 industry and foodservice associations. The publication is the premier resource for foodservice professionals.

“It’s an ongoing education process, but we’re pleased to see large restaurant chains such as Outback use the new pork nomenclature in their menus,” Gerike said.

He added, “We want people to talk about a pork Porterhouse chop (formerly a bone-in pork loin) and relate it to a Porterhouse steak. This reinforces that the cut is good for grilling and is tender and high quality.” 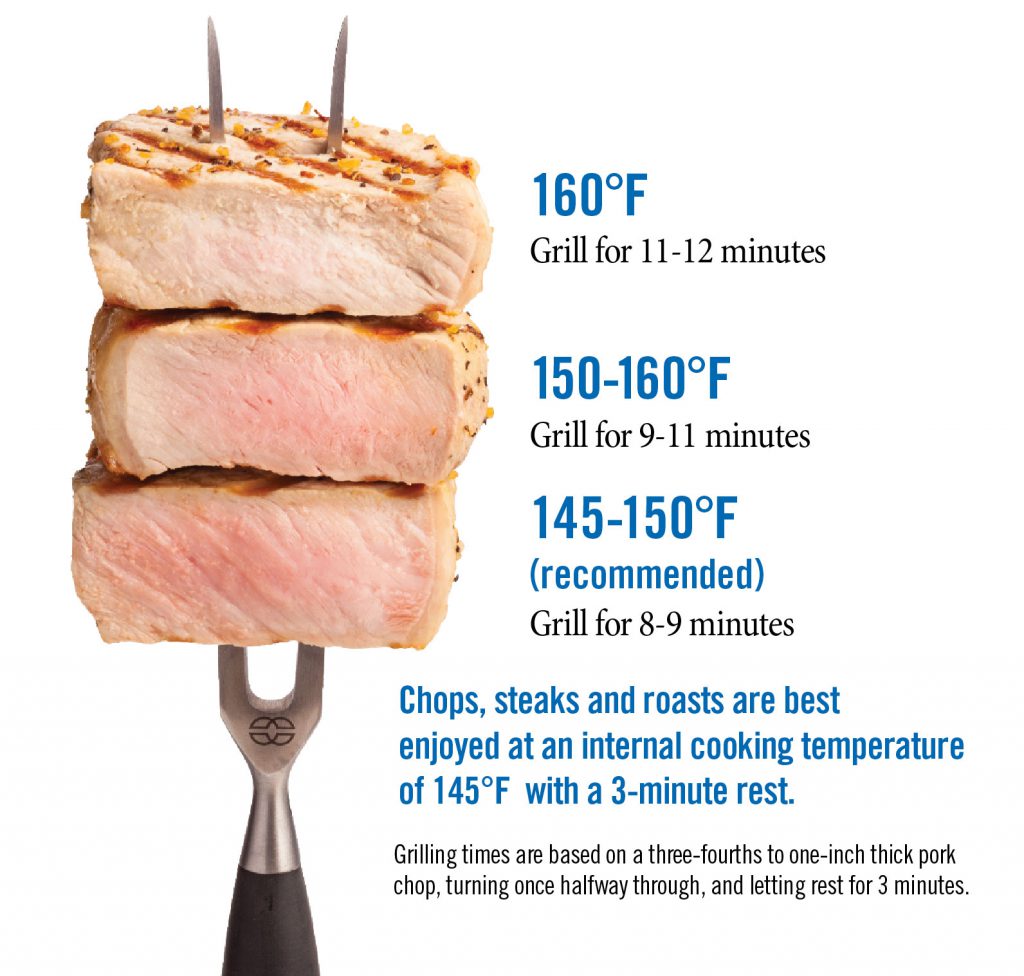 The National Pork Board got another tool in its quest to improve pork quality and eating consistency in 2011. That is when USDA approved a new recommended cooking temperature of 145oF, with a 3-minute rest.

The breakthrough was important because Checkoff consumer research consistently showed that Americans tend to overcook common pork cuts, resulting in a less-than-optimal eating experience. The revised recommendation applies to pork whole-muscle cuts, such as loin, chops and roasts. Consumers should still cook ground meat, such as ground pork, to 160°F.
The 145-degree recommendation stemmed from a 2007 Checkoff-funded research project conducted by Ohio State University to measure consumer eating preferences. As part of the project, the researchers tested how various end-cooking temperatures affected eating preferences. Of course, they needed to know if temperatures below 160°F would be safe if preferred by consumers.

“We sought this goal for years,” O’Neel said. “Research showed that U.S. pork could be consumed safely when cooked to an internal temperature of 145°F, followed by a 3-minute rest, so it was simply a matter of reviewing the science.”
However, old cooking habits often take years to change. That fact isn’t lost on the National Pork Board, but O’Neel claims that it won’t deter industry efforts.

“Consumers can enjoy pork cooked to a variety of temperatures, but 145oF is now proven as a safe choice,” he said. “And it provides more consistent pork that’s flavorful, juicy and safe. That’s why we are committed to helping our food-chain partners communicate this innovation to consumers.”

In the end, all paths to improve pork quality must lead to products that domestic and international customers want.
“By improving pork quality you improve the eating experience for pork,” said Gripe of Sam’s Club. “When consumers have positive experiences with pork they want to recreate those memorable experiences. This leads to increased demand and creates shared value throughout the pork supply chain by increasing margins for producers, packers and retailers.”