The 5th annual Pork Summit, Dim Sum and Then Some, was held at the Culinary Institute of America’s Greystone campus in St. Helena, CA. 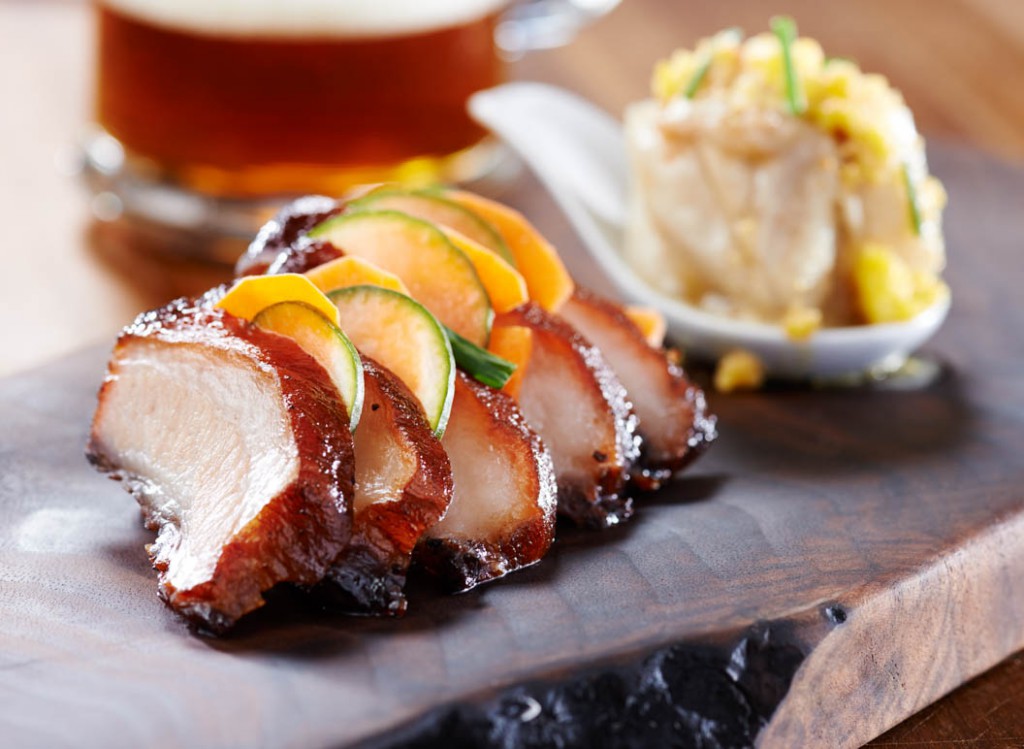 Global dim sum is a growing trend – creative chefs at restaurants across the country are pushing the traditional service beyond classic Cantonese, serving global-inspired dishes that customers can’t get enough of. Gerike explained that dim sum offers something for everyone, with small-plate menus and ready-to-eat cart service. Kitchens and staff get increased flexibility, without worrying over tickets and timing, while patrons get to satisfy their taste for adventure. Chefs Aglibot, Carmichael, Shepherd, and Scelfo showcased their unique interpretations of global dim sum with dishes that combined innovation, tradition, and of course, pork. 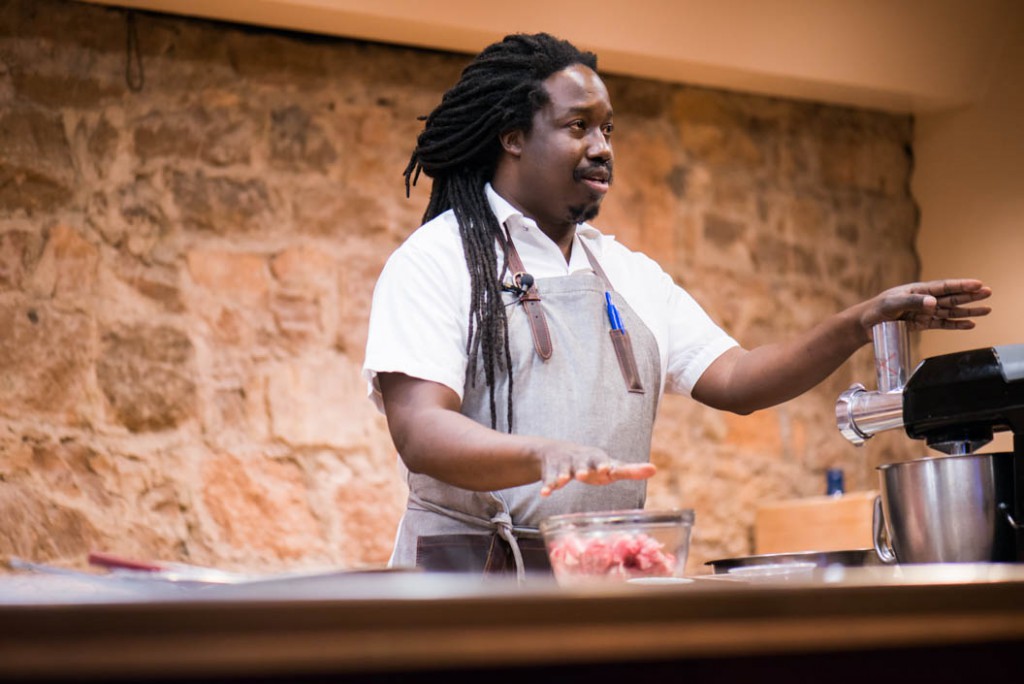 Chef Aglibot presented a dim sum duo of Pork and Shrimp Siu Mai paired with a take on Char Siu made with pork jowl. For a twist on the traditional siu mai technique, he washed blood from a pork shoulder before grinding it to give the dumplings a lighter texture. He combined the ground pork with ground shrimp and ground fatback, as well as a seasoning mix made of soy sauce, dry sherry, sesame oil and dried shrimp powder before wrapping it in a wonton wrapper and steaming. Chef Aglibot’s Char Siu started with brown sugar-cured pork jowl for the extra fattiness, and he marinated it in the traditional mixture of honey, soy sauce, rice wine and hoisin.

Chef Carmichael demonstrated a take on a traditional English Scotch Egg. He soft-scrambled egg yolks,sous vide and in an immersion circulator to create a velvety custard, which he formed into a round “yolk” using silicone molds. He wrapped the “yolks” with breakfast sausage made with ground pork shoulder and pork fat, seasoned with maple syrup, coriander, sage and New Mexico chili powder, then breaded and deep-fried them. The Scotch Eggs were finished with shaved Ubriaco Rosso cheese, a drizzle of maple syrup and chopped chives for the perfect salty, sweet, rich bite. 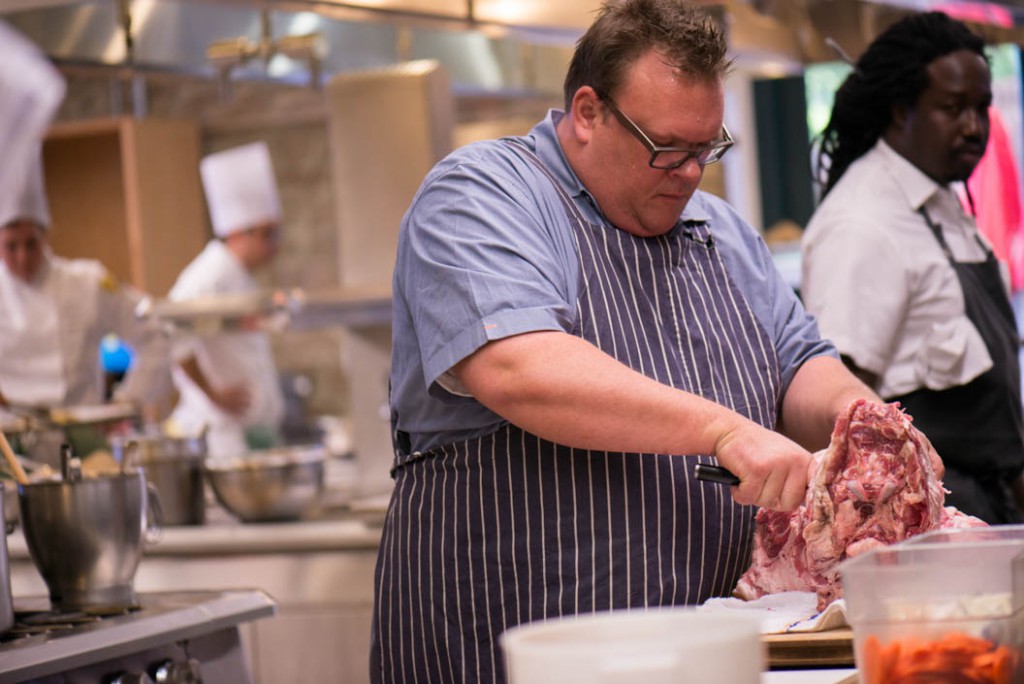 Chef Shepherd channeled French and Vietnamese influences for his Pig Face Thit Kho (stew). After curing and slow cooking the pork mask sous vide and in an immersion circulator for 48 hours, he roasted it until crispy and added it to a flavorful broth made with onions, jalapeños, carrots, star anise, cinnamon, fish sauce and pork stock. He garnished the umami-packed bowl with Coca Cola-pickled onions and a toasted baguette.

Chef Scelfo demonstrated a classic French technique by creating a Pork Cheek and Liver Roulade. He seared, braised and shredded the cheek meat, mixed it with seared and chopped liver and bound the mixture with Activa® RM Transglutaminase before rolling it into a roulade. He then seared the sliced roulade and served it with Dijon-seasoned yogurt, pickled radish, celery and mustard seeds, walnut halves and edible flowers. 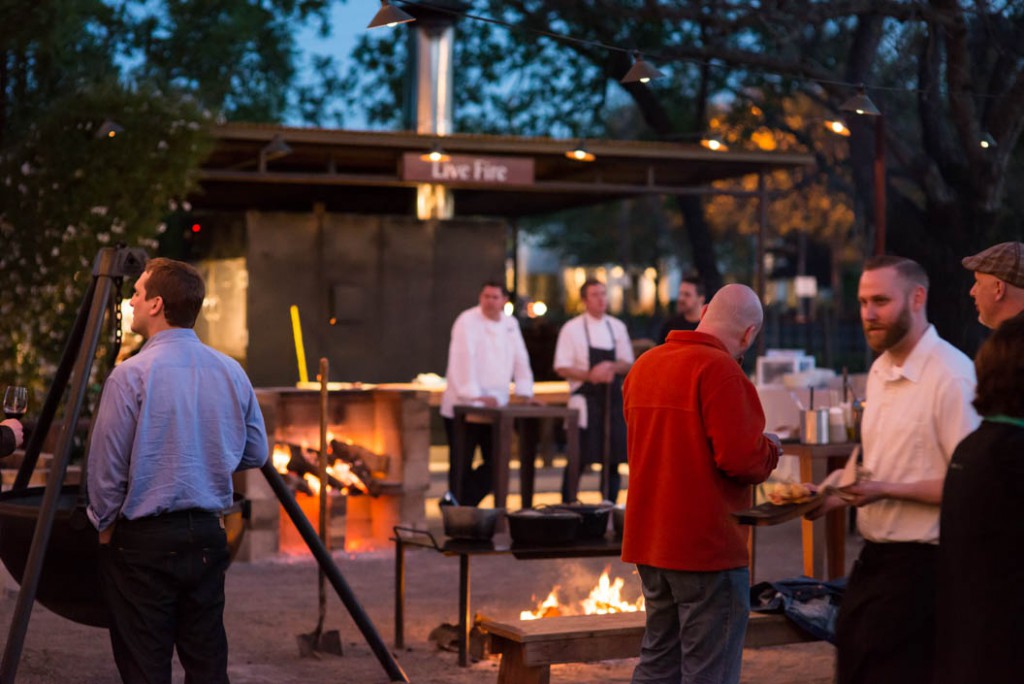 After the presentations, guests attended a welcome reception at Farmstead Restaurant at Long Meadow Ranch. They were greeted with pork-centric appetizers, including Mini La Quercia Ham Sandwiches and Boudin Noir Croquettes while Chef Stephen Barber cooked a whole-hog barbecue outside in the live fire pit. Dinner was a family-style feast under the twinkling Napa lights on picnic tables outside Farmstead’s shabby-chic barn. Guests enjoyed a whole-smoked heritage pig and St. Louis ribs accompanied by asparagus salad with country ham, plancha-cooked beet salad and cowboy pork and beans – followed with delicious strawberry shortcake for dessert. 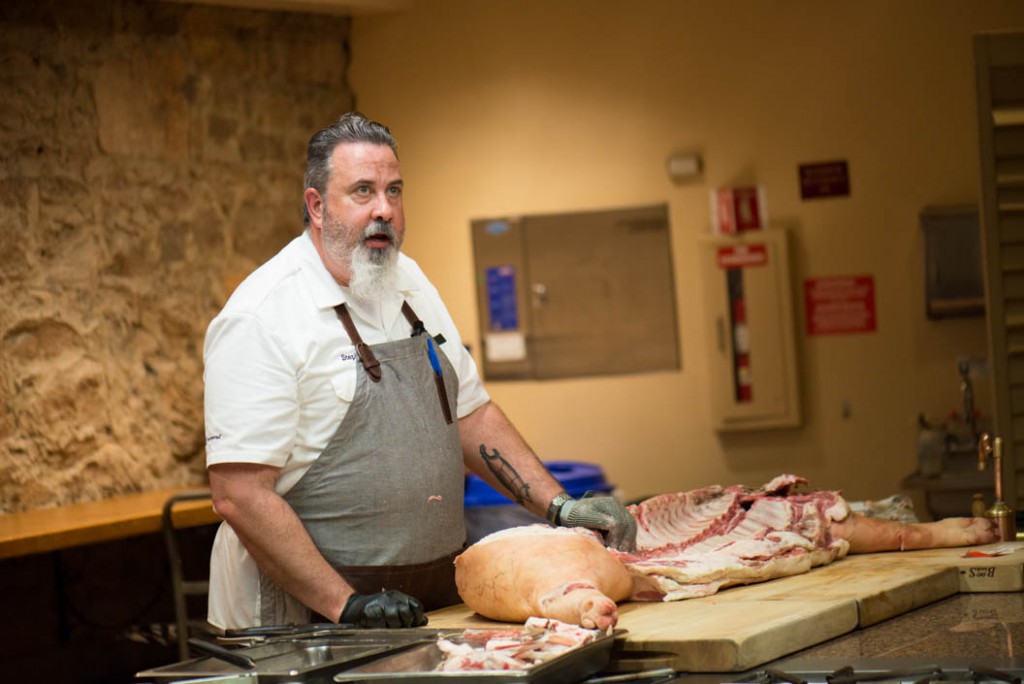 Saturday’s events started with a Ramen Bar breakfast – guests received a bowl of ramen noodles, chose either a spicy or mild tonkotsu broth, and then topped their bowls with pork tonkatsu, pork belly, buttered corn, togarashi, Shoyu Tamago, kombu, sesame seeds and green onions. After breakfast guests sat down in the Ecolab Theater for a Pork 101 class taught by Gerike. Attendees learned about the pork industry from farm to fork, including breeds, production, animal care and meat science, and were given a pork quality demonstration and tasting. In addition to Gerike’s presentation, CIA Chef Instructor Bill Briwa taught a segment on the art and science of brining. Guests enjoyed an Oaxacan-themed meal for lunch, and then Gerike demonstrated how to break down a half hog into primals. The discussion focused on the new Meat Buyer’s Guide updates including pork chop nomenclature and value cuts like the individual fresh leg muscles.

After the butchering demonstration, chefs were divided into teams made up of a demonstration chef, members of the foodservice media and several Taste of Elegance winners. Each team put their butchering skills to the test to break down their own half hog and prepare for the Sunday market basket exercise. Attendees then enjoyed a pork-and-beer pairing class from Jared Rouben, Brewmaster at Moody Tongue Brewery, followed by a dim sum-style reception in the Ventura Center. Chef Robert Danhi, Southeast Asian food expert, filled roaming carts with Crispy Sriracha Grilled Pork Ribs, Double Crunch Vietnamese Pork Rolls, Miso Ramen Bacon Yakitori, Cracklin’ Pork Belly bites with a tomato-pineapple pickle and Singaporean Pork Curry Paratha Puffs. The dim sum fare paired perfectly with the Moody Tongue beers. 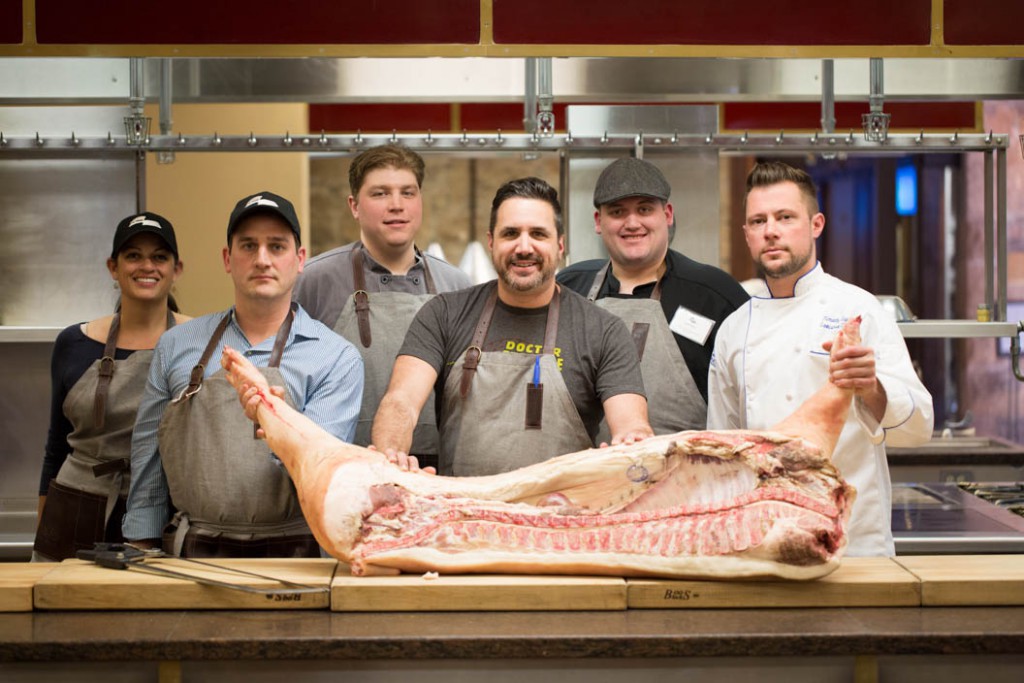 Everyone was excited to get back into the kitchen on Sunday after a country ham, sausage, gravy and biscuit bar breakfast. Teams joined together in a market basket exhibition, testing all the techniques learned over the weekend. The teams had four hours to cook and produce four dishes, which were all enjoyed at a post-exhibition banquet.

From butchery and global dim sum to the perfect pork-and-beer pairings, education and innovation is the goal of the Pork Summit. After a delicious weekend, attendees left St. Helena feeling inspired, with a deeper understanding of pork’s versatility and a greater appreciation for its incredible flavor.

A Conversation With Pork Summit Chefs 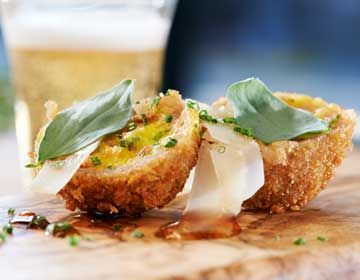 At Pork Summit 2015, Chef Paul Carmichael served a take on a Scotch egg, made with custard “yolks” wrapped in breakfast sausage and drizzled with maple syrup.

Garnish with shaved Ubriaco Rosso, a drizzle of maple syrup and chopped chives. 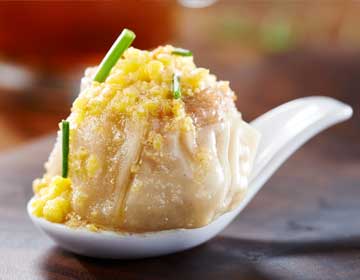 Notes: You can make your own dried shrimp powder by fully dehydrating dried shrimp in a 300° oven for 20-30 minutes, or until they feel fully dried and brittle. Grind them in a blender or spice grinder until fully pulverized. 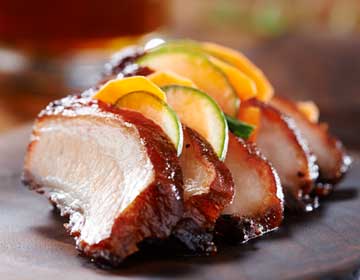 Chef Rodelio Aglibot cured pork jowl in brown sugar, barbecued it and brushed on a honey-soy sauce glaze for his take on char siu at Pork Summit 2015. 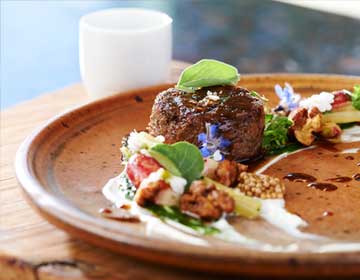 This savory roulade is made with crispy pork cheek and liver and topped with pickled giardiniera, created by Chef Michael Scelfo at Pork Summit 2015.

To serve: Slice roulades into ¾” rings and sear on both sides until crisped and warmed through. Serve on a smear of Dijon-seasoned yogurt, spoon reduced braising liquid over top of roulade and season with Maldon salt. Garnish with pickles, pickled mustard seeds, walnut halves, edible flowers and a drizzle of high quality olive oil. 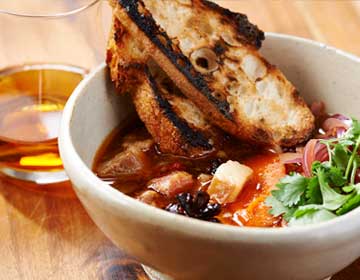 To serve: Divide stew among four bowls and serve with baguette or warm rice. Garnish with Coca Cola-pickled red onions. 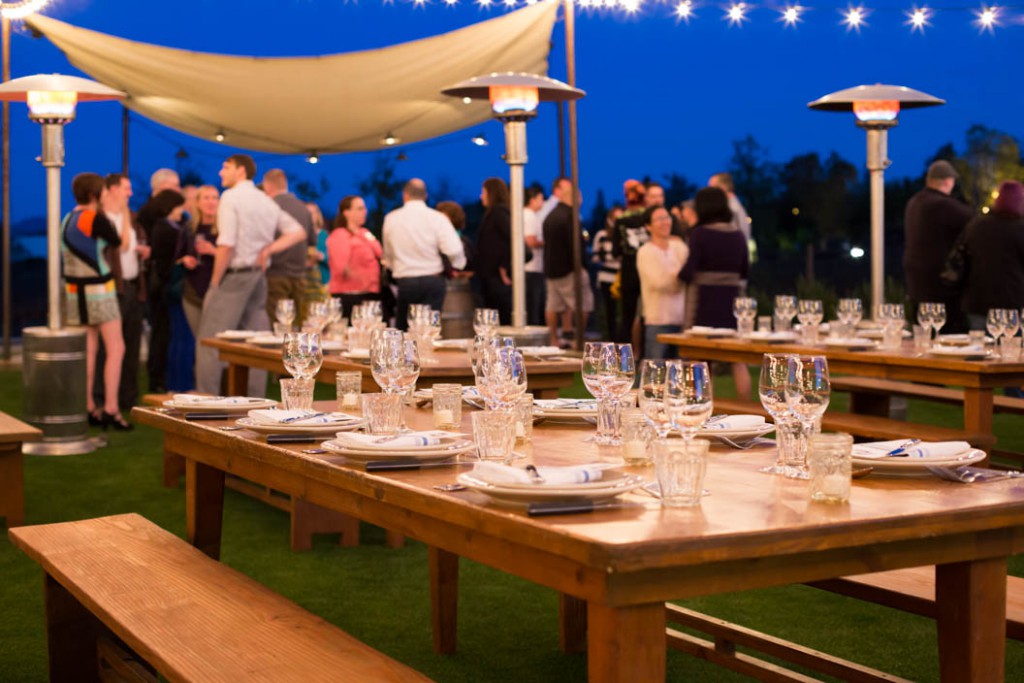 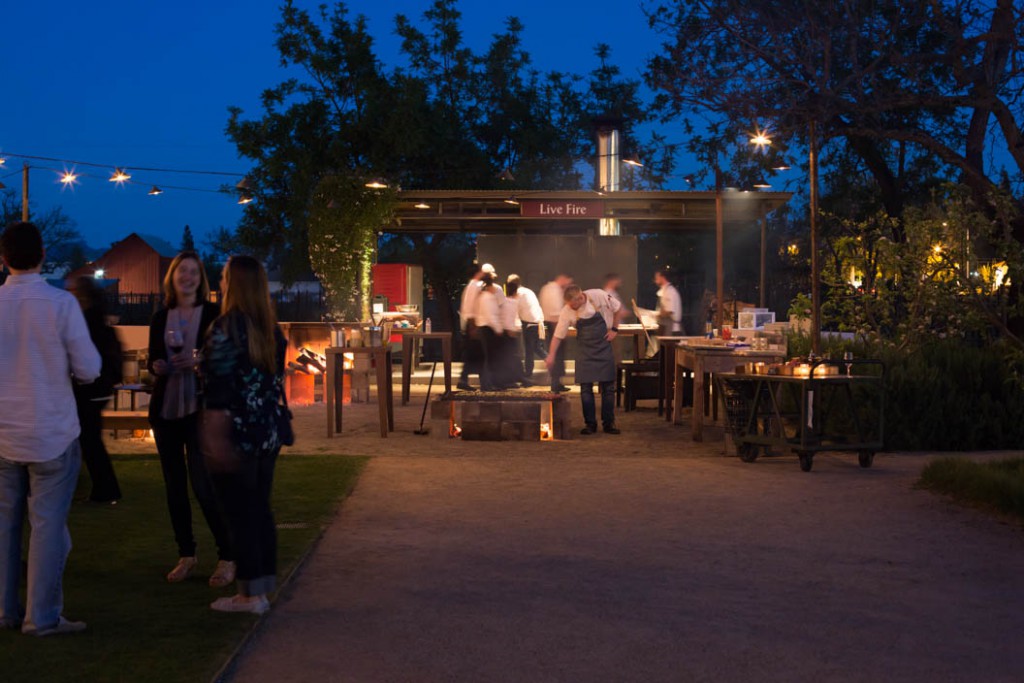 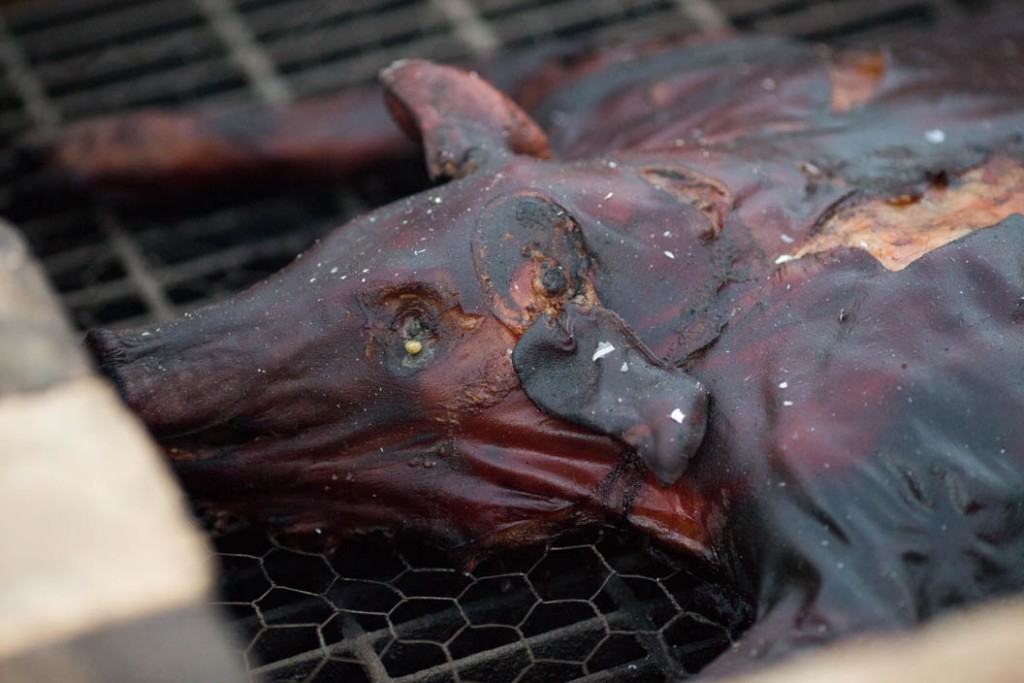 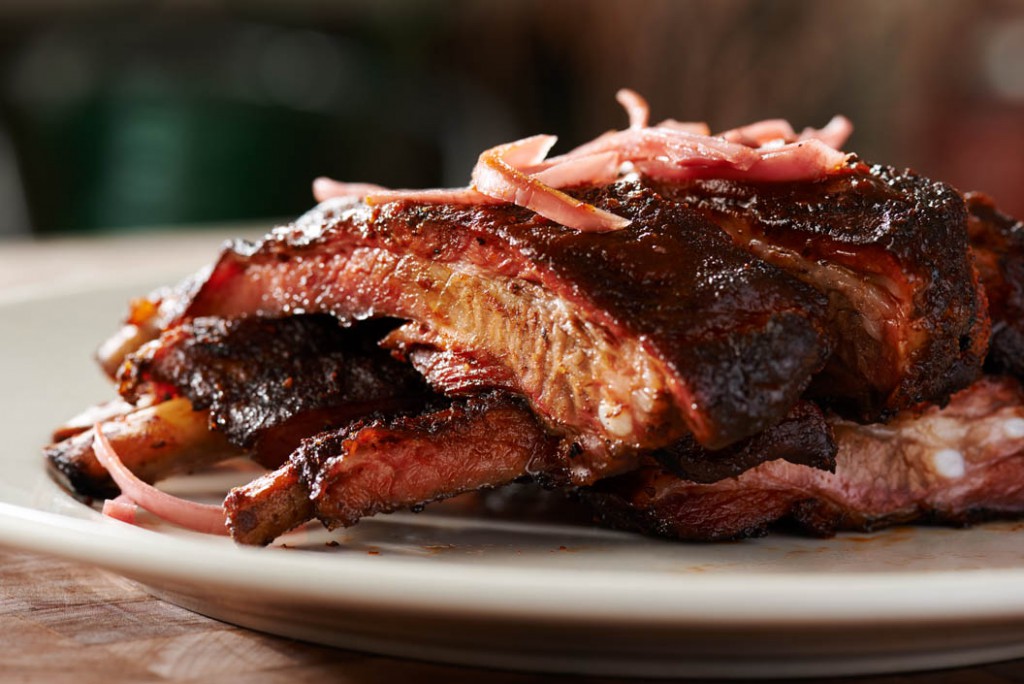 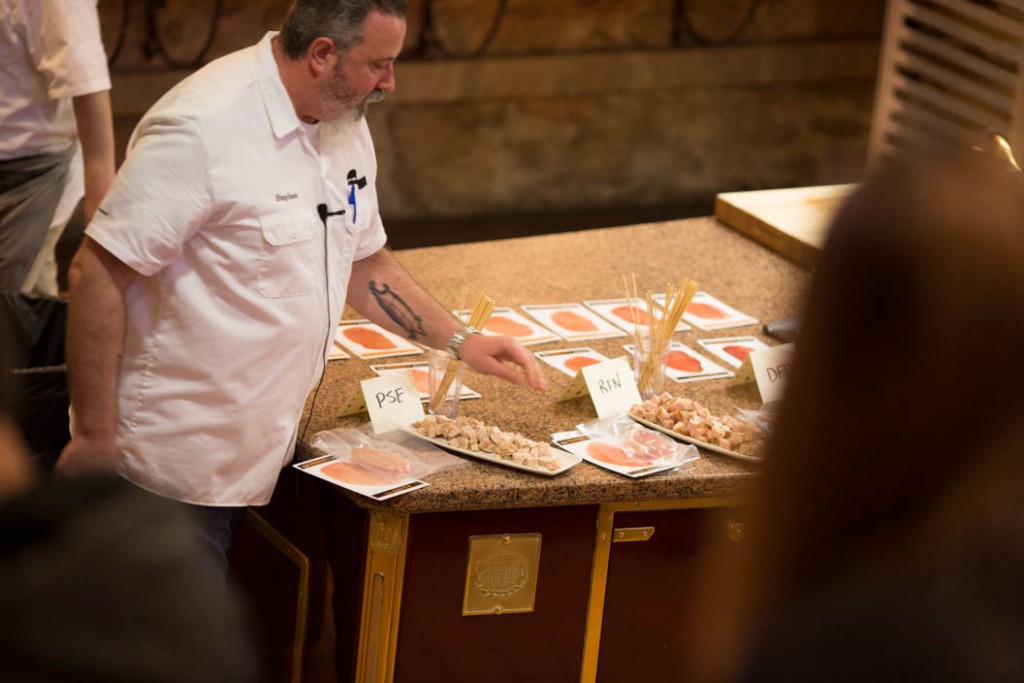 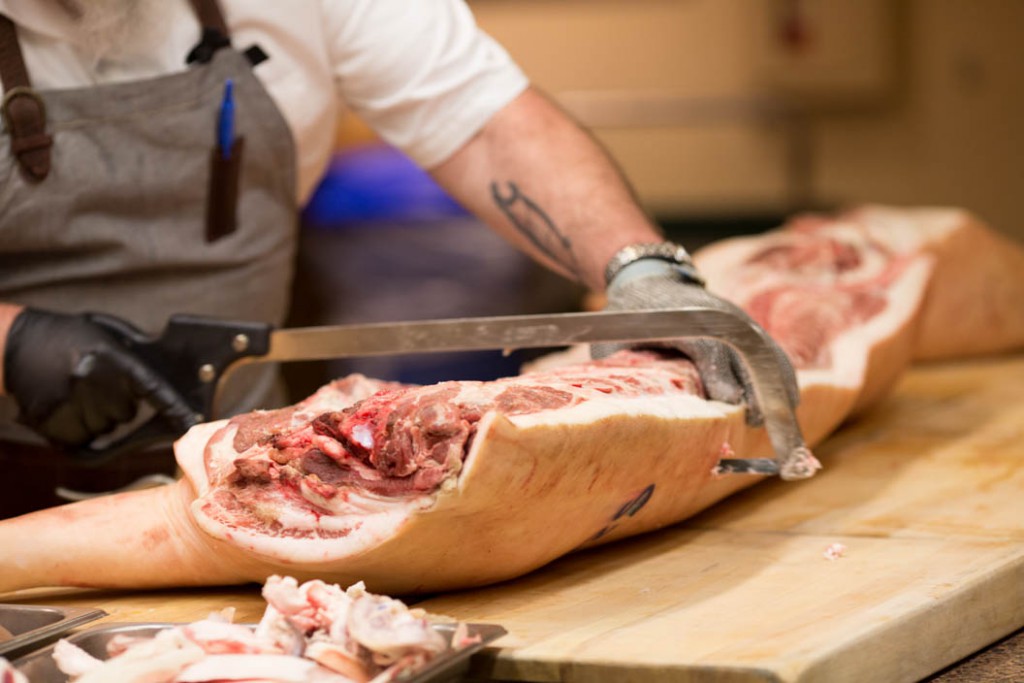 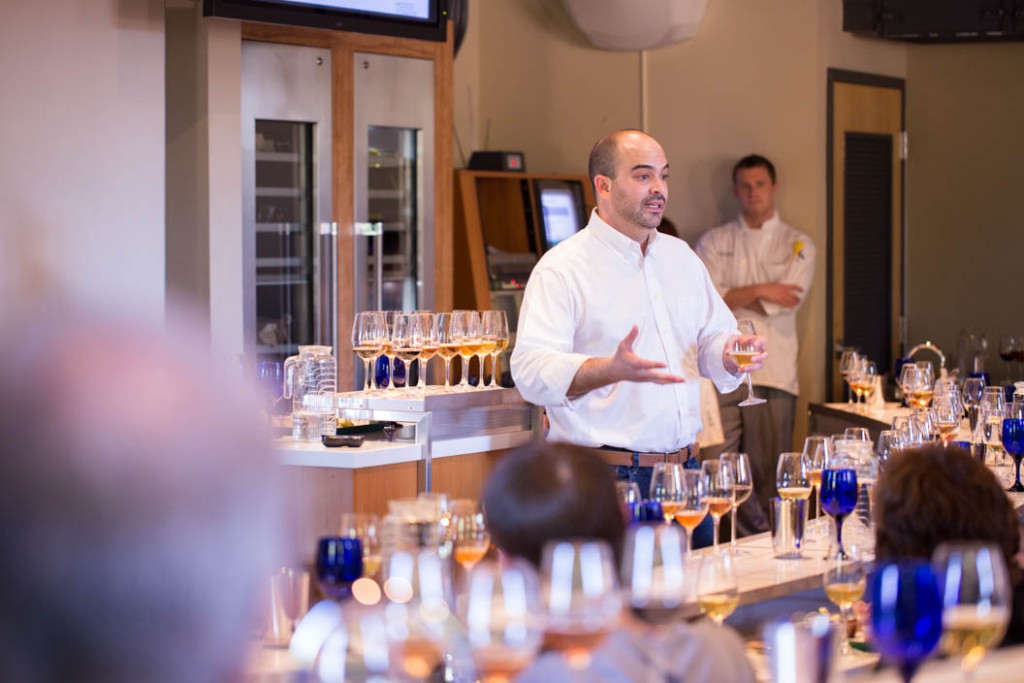 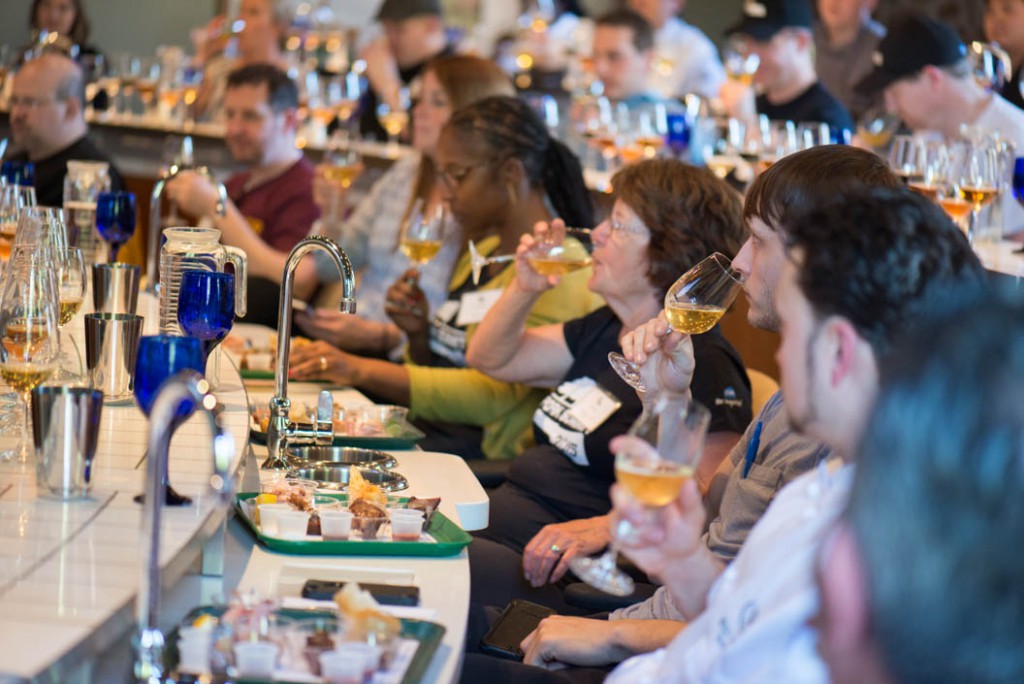 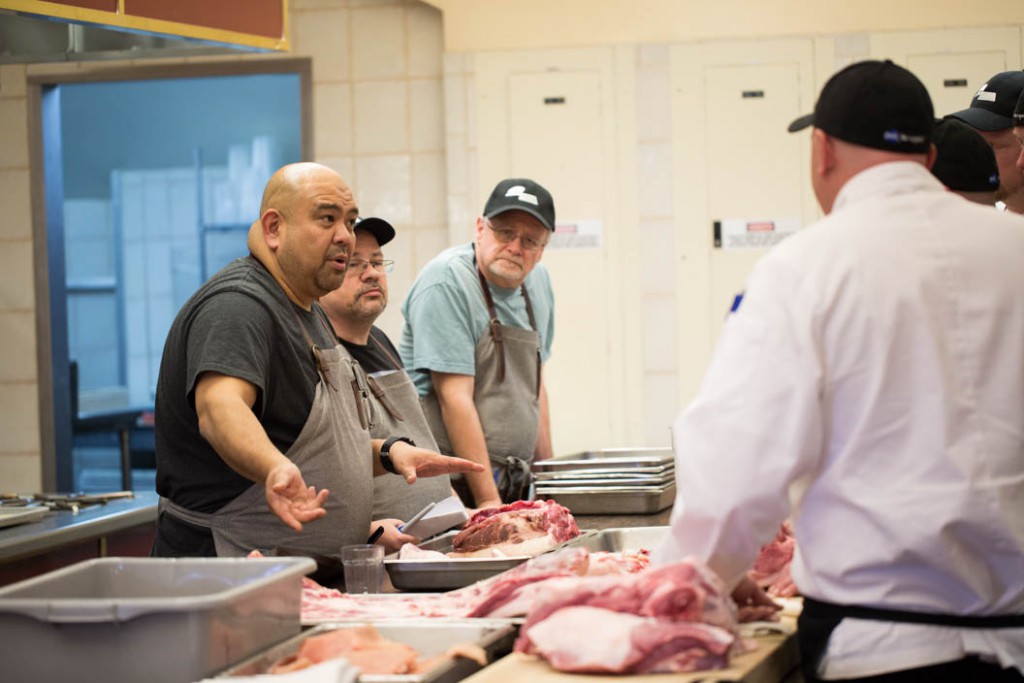 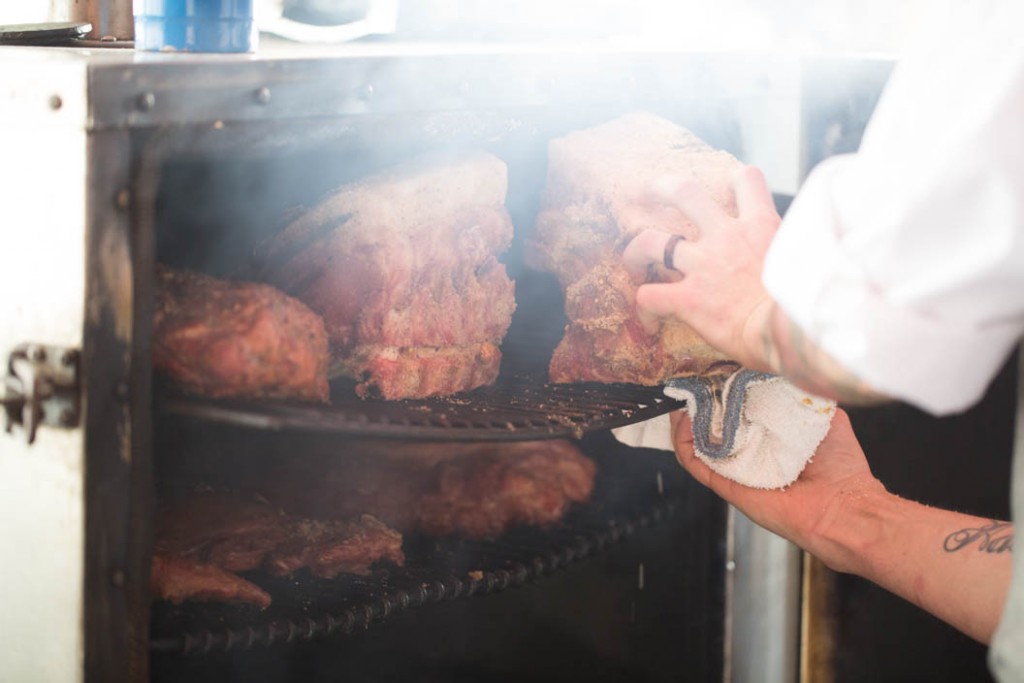 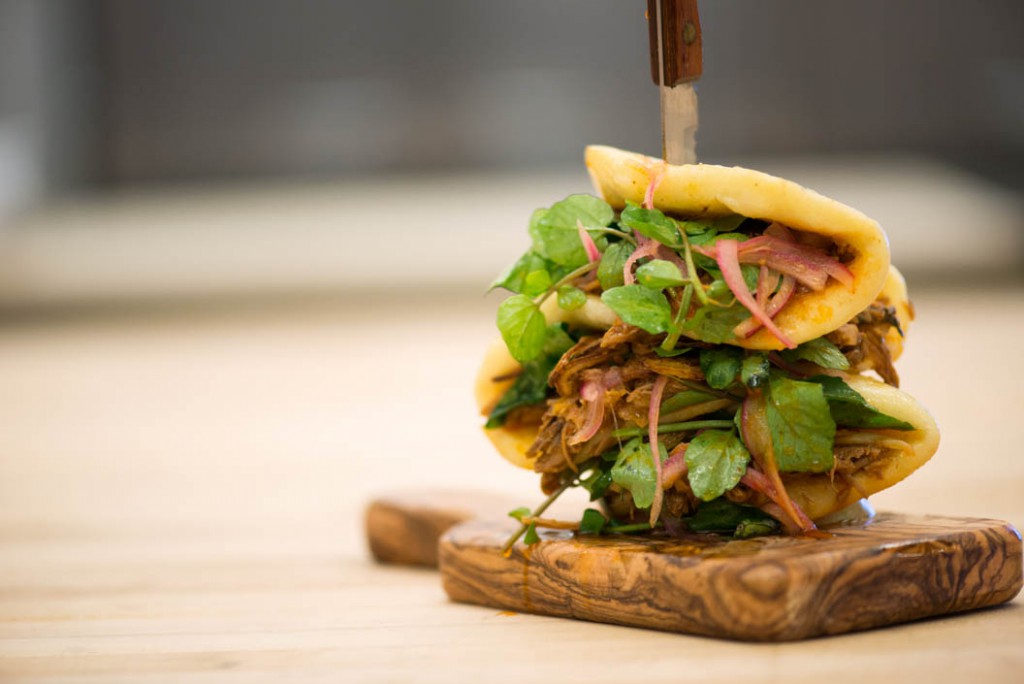 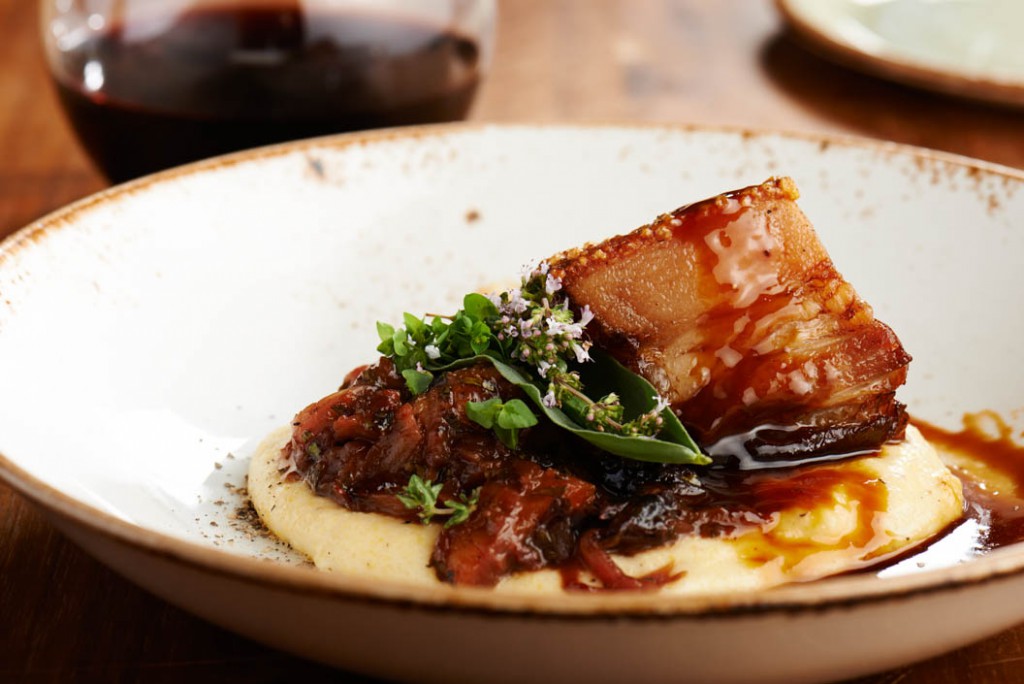