What’s in a name? Plenty – especially for pork. The USDA recently approved new common names for several pork cuts seen in retail grocery cases and on menus. After several years of work with the Industry-Wide Cooperative Meat Identification Standards Committee, fourteen pork cuts now have more consumer-friendly names, including many that align with well-known beef or steakhouse terms.

The cut formerly known as a pork chop or rib chop is now the ribeye chop and is available either bone-in or boneless. Bone-in loin chops were renamed Porterhouse chops, while boneless top loin pork chops are now New York chops.

The new names are the result of extensive consumer research that found these new terms help consumers make better buying decisions at the butcher or grocery store by thinking about pork more like steak. It also helps retailers merchandise pork in different ways to increase profit margins and offer greater variety and value to customers.

Positioning pork as a center of the plate protein like beef and referring to specific pork cuts may help restaurateurs charge more for specialty chops. Showcasing pork as a profitable, higher dollar menu item versus a value-added meat will also help restaurants deal with skyrocketing beef prices as supplies continue to diminish.

“Right now, bellies, bacon and spare ribs continue to show the highest dollar value in terms of raw material, followed by the tenderloin,” says Rob Levitt, owner of Butcher & Larder, a specialty butcher in Chicago, IL. “This time of year, as slow cooking comes to an end, people are looking for different cuts they can grill or cook quickly.” 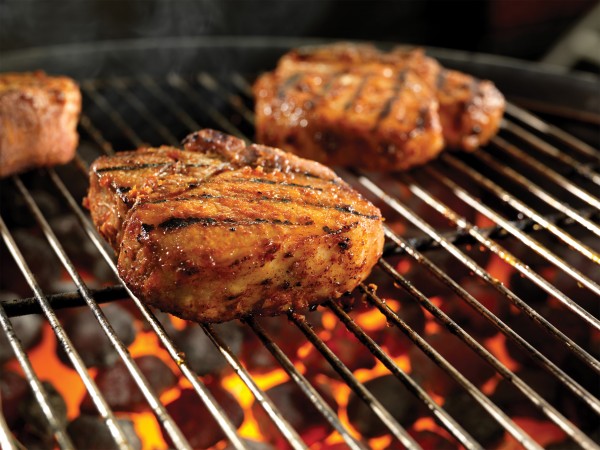 It’s early in the game for new names like ribeye and New York chop, but some chefs have already started calling out the Porterhouse Chop.

“Just like beef, ‘Porterhouse’ from the pork loin is what we call the loin end from the middle of the loin and back, with the bone and tenderloin still intact,” says Levitt. “The meat on a Porterhouse is not as fatty as, say, a shoulder cut and can be as thick as the butcher cuts the chop. Because a lot of chefs these days are working with whole pigs, you can get more portions of Porterhouse steaks than tenderloins as a higher ticket pork item.”

At Craft in New York City, Executive Chef Chris Lavey serves Porterhouse chops as a large, family-style cut easily shared by tables of two or even six. “I think people are looking for something new, but we want to stay true to our concept and still cook the cut properly,” Lavey says. “The Porterhouse chop is just a new way to provide more excitement for our diners and it’s easier to sell because it’s a recognizable term you might see at a steakhouse.”

Lavey roasts the Porterhouse chop with thyme and rosemary, basting it in butter and more herbs to finish, and removes the bone. Then he slices the meat and serves it with a bacon-infused pork jus. He prepares the jus by simmering roasted suckling pig bones with mirepoix and tomato paste for 24 hours, then reduces the mixture into a thicker demi-glace or sauce.

“Chefs use the term ‘pork chop’ for lack of a better name, and it’s so vague,” Barber says, noting his excitement over the new nomenclature. “In fact, before ‘New York chop’ was approved, the official term was ‘pork loin chop top loin chop.’”

Lee Morcus, CEO of Kaiser Restaurant Group in La Quinta, CA, has used explanatory names for pork cuts for years. “We use semantics like ‘Porterhouse’ as a descriptive way to help amplify and clarify what we are cutting,” says Morcus, whose restaurants bring in whole pigs and suckling pigs daily for butchering on site.

“What’s old is new again,” he says. “In the traditional butcher shops like the ones I grew up in, we butchered animals according to what sold and our customer preferences.” In a restaurant setting, working with whole animals and different chops allows his chefs more flexibility and creativity in their menu planning, and it reduces waste. 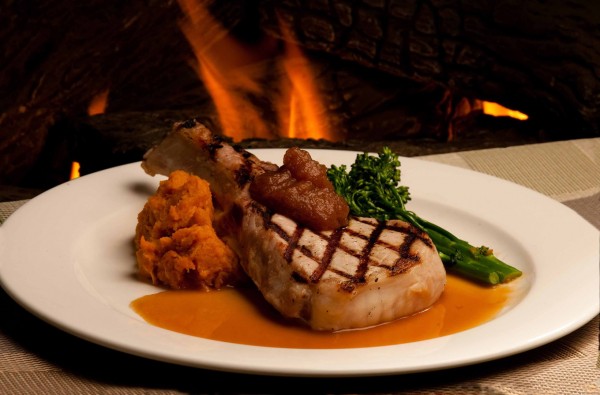 While Porterhouse chops, New York chops, ribeye chops and other specialty pork cuts taste great grilled or pan-roasted, some chefs look to other techniques like brining and smoking to add extra flavor and moisture.

“We also fabricate different cuts in different ways depending on the cut, cooking technique and flavor profile we are seeking,” Morcus says. “For example the same part of the animal that we cut for grilling or broiling will be cut differently if we are using it for roasting or sautéing.”

Morcus’ Hog’s Breath Inn serves a brined and char-grilled double cut ribeye chop with calvados demi-glace, spicy apple compote and seasonal vegetables. “In this case, the creativity is not so much in the cutting, but what the chef does with that loin or rib chop, and how it’s positioned on the menu,” he says. “This allows the chef to have flexibility and a creative outlet, and gives the guests continually evolving experiences.” At Morcus’ new Figue Mediterranean Restaurant in La Quinta, CA, which opened in late March, Chef Francois de Melogue smokes pork chops and loins for extra flavor and serves ribeye chops Milanese-style. 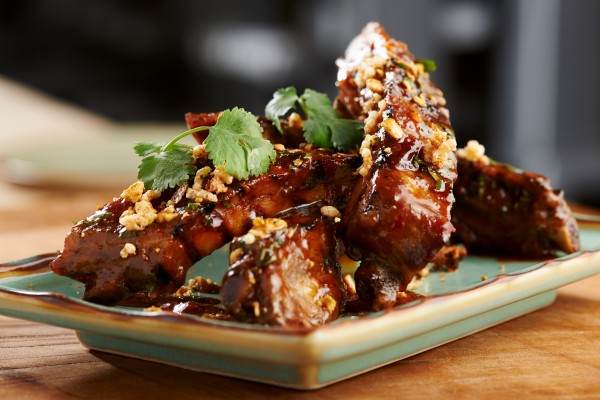 According to Levitt, the sirloin chop can come out a few different ways depending on who’s doing the cutting. “It’s either the bottom half of the ham or leg end of the loin – where the Porterhouse ends, the sirloin begins,” he says. “It can be a slightly smaller cut with a little more chew, but it has a ton of flavor, thanks to the nice cap of fat on top.”

Levitt’s butcher shop also offers country-style chops and ribs. The ribs are rounder and meatier than traditional loin back or spare ribs and come from the shoulder or blade end of the loin. County-style chops come as bone-in or boneless shoulder steaks. Both can easily be smoked, slow-cooked or braised, then finished on a grill. Back Forty in New York, NY serves a country-style rib chop with slow-cooked grits, roasted mushrooms and a maple-infused jus, and Fatted Calf in San Francisco, CA serves slow-roasted country-style ribs stuffed with peperonata – a mix of sweet and hot peppers with capers. 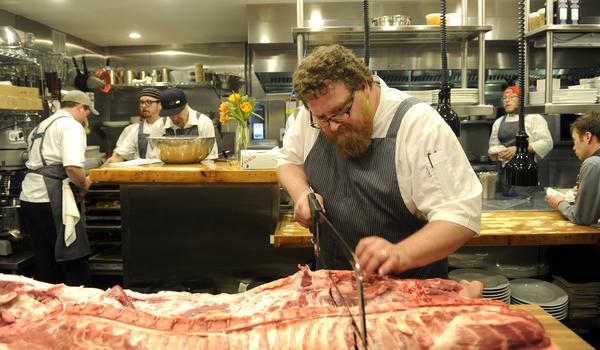 Justin Brunson, chef and owner of the recently opened Old Major in Denver, CO and owner of Masterpiece Deli and Denver Bacon Co., serves the pork equivalent to the beef Kansas City strip. Though not part of the new nomenclature, Brunson believes calling out a familiar name for the cut helps. “Right now I cut the pork chop as a bone-in pork sirloin, but if I say Kansas City strip, I feel I can charge more and it helps the customer understand what they’re eating,” says Brunson, who butchers whole pigs in his restaurants.

Brunson menus pork shank as pork osso bucco, and he’s also fond of pork collar. “The collar is actually the top part of the pork shoulder, but I can charge $29 for it as an entrée versus $22 for pork shoulder,” he says. “It’s a great piece of meat with a little fat on it that Italians slice thin and dry for coppa, but it also tastes great roasted.” Brunson will sous vide the collar with rosemary, sage, chili flakes, garlic and orange zest at 138 degrees Fahrenheit for 24 hours, then sear it to medium or pan roast for the same tender texture. He completes the dish with seasonal vegetables like roasted carrots, turnips and Brussels sprouts, pea shoots and peas.

Across the country, new pork common names are taking over in the meat case and on the menu, and operators are making them work to their benefit. From the Porterhouse to the ribeye chop, new cut names let chefs position pork as premium.