One of the most historic seaports in the New World boasts an eclectic array of food from comida Criolla to Asian-fusion.  The island’s rich culinary and cultural history made it the perfect place for the 2015 Pork Crawl.

For the 5th annual pork crawl the National Pork Board wanted to explore authentic Latin cuisine and San Juan was the perfect place.  San Juan is located along the coast of Puerto Rico and is a historic city filled with culture, food and fun.

On the first night of the trip the National Pork Board hosted a caja China pig roast with chefs Jose Enrique, of Jose Enrique, and Pedro Álvarez, owner of AlCor Foods Inc.  Guests arrived at a beautiful Estancia at The St. Regis Bahia Beach Resort greeted by the aromatic smells of roasting pig and drinks with fresh squeezed juices and Puerto Rican rum.

The 50-pound brined pig roasted in the caja China for hours before guests enjoyed the tender meat and crispy skin. Attendees were invited to make their own sandwiches. A Puerto Rican tradition, the sandwiches start with a sturdy slice of pan de agua (local bread) topped with roasted meat, pieces of crispy skin, pickled red onion, Puerto Rican avocado (different from the Hass avocado common state-side), a squeeze of lime, a sprinkle of farmer’s cheese and Jose Enrique’s house-made pique (hot sauce). On the side, Jose and Pedro served rice, beans and sweet roasted plantains. The delicious combination had people coming back for seconds, thirds and even fourths. The evening was a perfect introduction to Puerto Rican food and hospitality, and attendees went home excited for the next day’s activities.

The next day attendees met in the lobby of the prominent Hotel El Convento for the Pork Crawl in Old San Juan – their appetites whet from the caja China the night before. The crawl included six of the island’s best restaurants, highlighting what the San Juan cuisine is all about – a culinary melting pot! The combination of Spanish, African, Taíno and American influences, and how they mix with indigenous ingredients, provided a very memorable tour de pork! See Restaurant Stops below.

After two pork filled days, guests had the opportunity to go on a tour of Puerto Rico’s Ruta de Lechón (Road of Roasted Pork). Found in the otherwise nondescript area of Puerto Rico called Guavate, the road is peppered with Lechoneras, rustic roadside eateries that specialize in lechón, or spit-roasted suckling pig. The Ruta is a pork-lovers Mecca and therefore was a can’t-miss stop for Pork Crawl attendees. 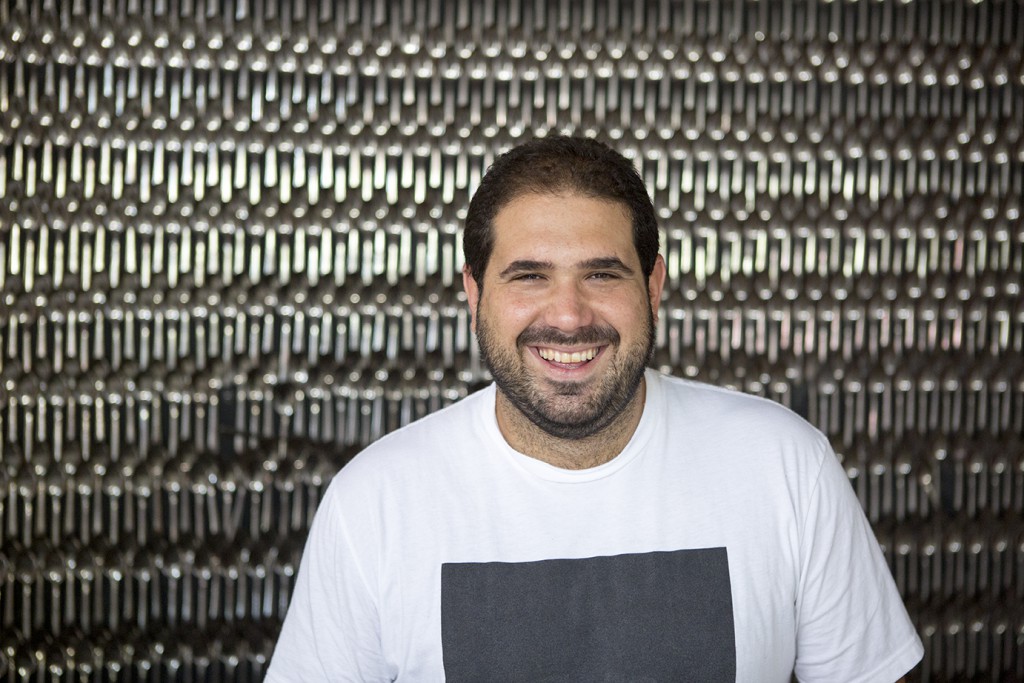 He’s the first Puerto Rican chef to become both a James Beard Award semifinalist and to be named a Food & Wine Best New Chef – and this is only the beginning for Jose Enrique. Since opening his eponymous restaurant in San Juan in 2007, he’s taken traditional Puerto Rican, Criolla cuisine to new heights with a menu that changes daily to reflect the freshest ingredients from around the island. In 2011, he opened the Criolla-inspired brasserie Capital, and his casual coffeehouse Miel followed soon after.

Jose Enrique was born in the Santurce district of San Juan and grew up in a family of amazing cooks – but studied law after high school. Realizing that food was his passion, he switched gears and graduated from the Culinary Institute of America in Hyde Park in 1998. From there, he traveled to kitchens around the world, including Riche in New Orleans, Café Centro in New York – even stints in France and Belgium – before homesickness led him back to San Juan.

In the years since opening his first restaurant, Jose Enrique has dedicated himself to crafting revived, modern interpretations of Puerto Rican classics. His latest venture is the recently opened restaurant at the El Blok Inn on Vieques, a small island off the coast of the Puerto Rican manland. As the accolades pile up, Jose Enrique remains focused on the food – and whether it’s the relaxed island fare at El Blok or a cup of premium Puerto Rican coffee at Miel, the food has his patrons applauding.

On the Pork Crawl guests enjoyed Fricase de Patitas y Cachetes de Cerdo, or Stew of Pigs Feet, Ham Hock and Pork Cheeks. Traditionally a rustic dish, Chef Benet elevated the ingredients to perfectly fit his fine dining establishment. Paired with a glass of his DOBLEÚ wine, white rice, avocado salad, and a version of pique with the addition of bili, (a local fruit called quenepa, soaked in rum) the dish truly shined.

Benet opened Pikayo in 1990, but not before filling his résumé with a degree from the Culinary Institute of America, stints in top kitchens like Le Bernardin, The Water Club and the Maurice Restaurant in New York, and as the Chef de Cuisine at Puerto Rico’s Governor’s Mansion. After opening, Pikayo soon caught the attention of Gourmet, Bon Appétit, Condé Nast Traveler and The New York Times, and Benet has since added author, winemaker and TV personality to his list of jobs. His cookbook, Puerto Rico True Flavors, was published in 2007, his wine DOBLEU´ launched in 2009, and he’s been featured on Travel Channel’s “Bizarre Foods with Andrew Zimmerman” and competed on Bravo’s “Top Chef Masters.” 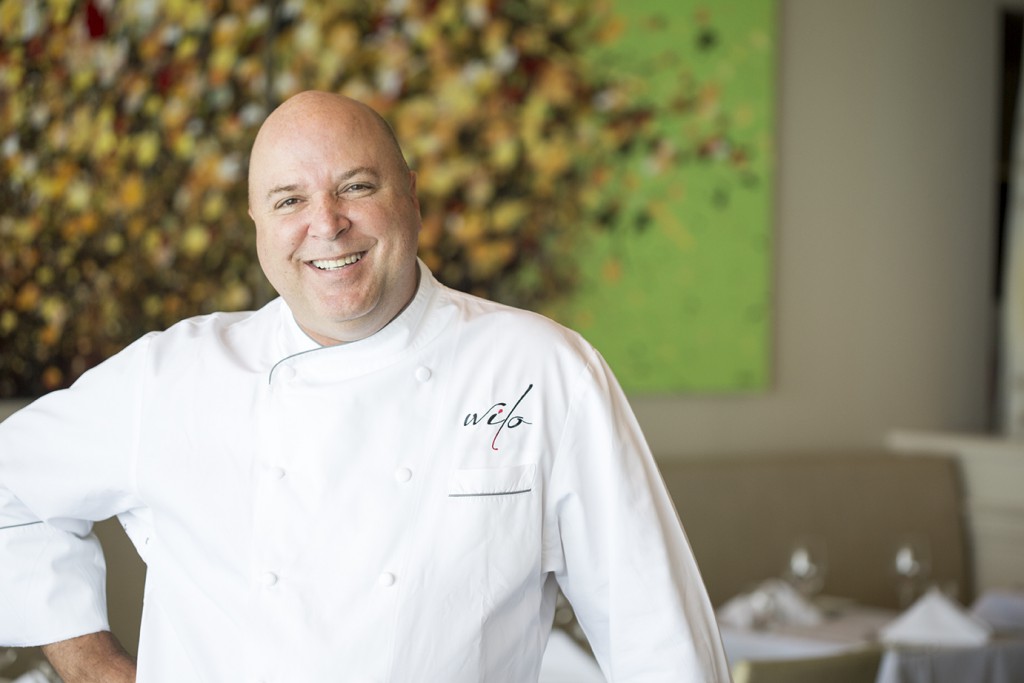 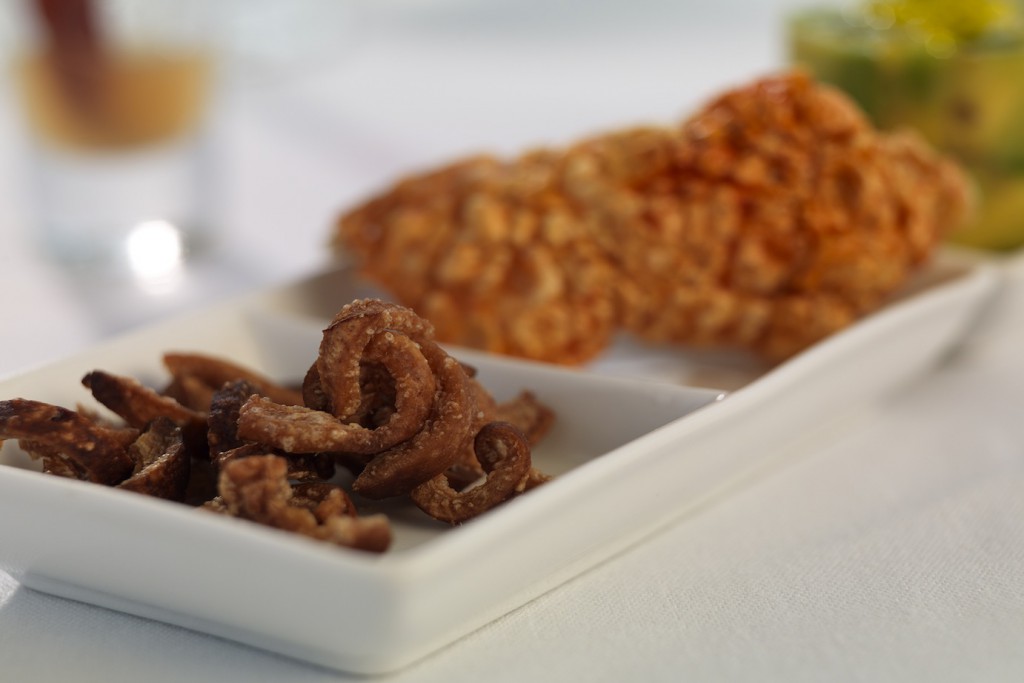 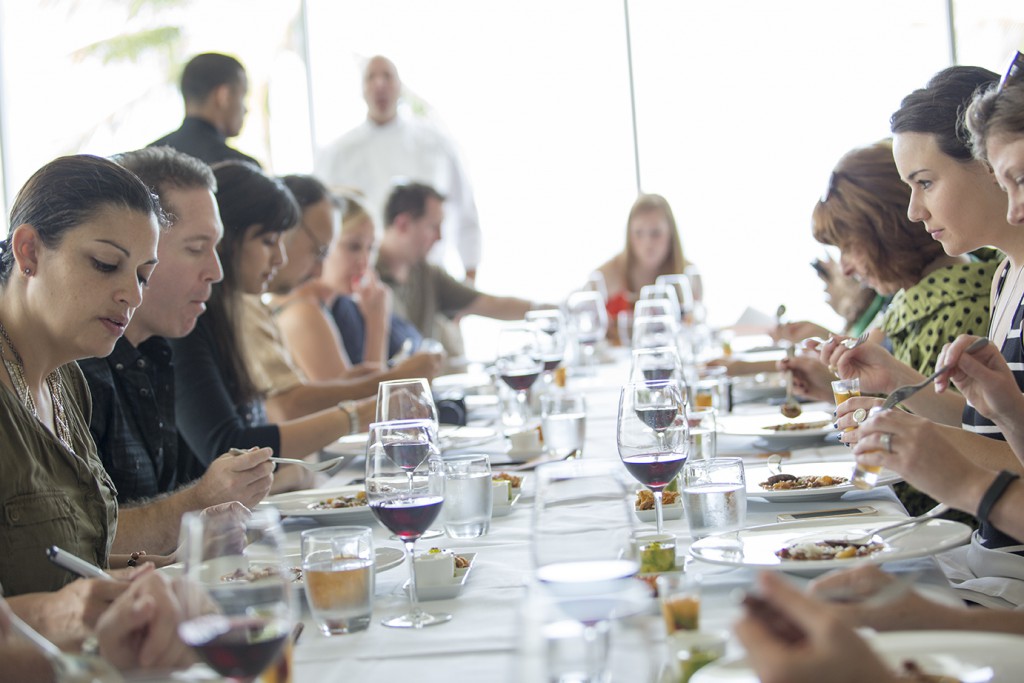 Chef Treviño started the pork crawl meal with “the bling of Puerto Rico” – chicharrón – nestled into Chinese takeout boxes and served with spicy garlic chili sauce similar to Sriracha. Next up was a trio of bites including Pork Amarillo Dumplings with ground pork and sweet plantains, a Pork Belly Profiterole with Szechuan Salted Caramel and Spiced Jerked Pork with Sake Butter Udon. The deliciously unique food was paired with Budatai’s refreshing take on a mojito – rum, lime and mint topped off with some bubbly.

Originally from San Francisco, Treviño fell in love with Puerto Rico during his tenure at El Conquistador resort. From there, he opened several restaurants in Old San Juan – The Parrot Club, Dragonfly and Aguaviva. In 2007, Treviño left to open Budatai, and he’s also part of the team behind tapas spot Bar Gitano, neighborhood tap El Barril and Criolla kitchen Casa Lola. He’s appeared on The Food Network’s “Iron Chef” and “The Next Iron Chef,” and his food has been featured in Bon Appétit, Gourmet, Condé Nast Traveler and The New York Times. 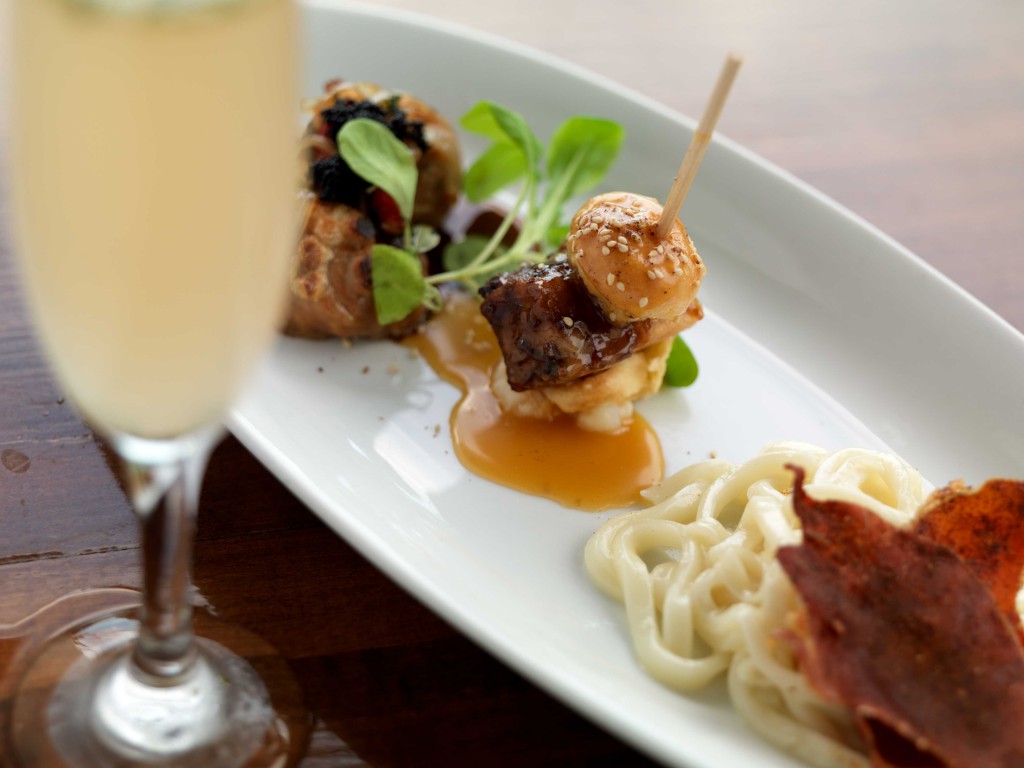 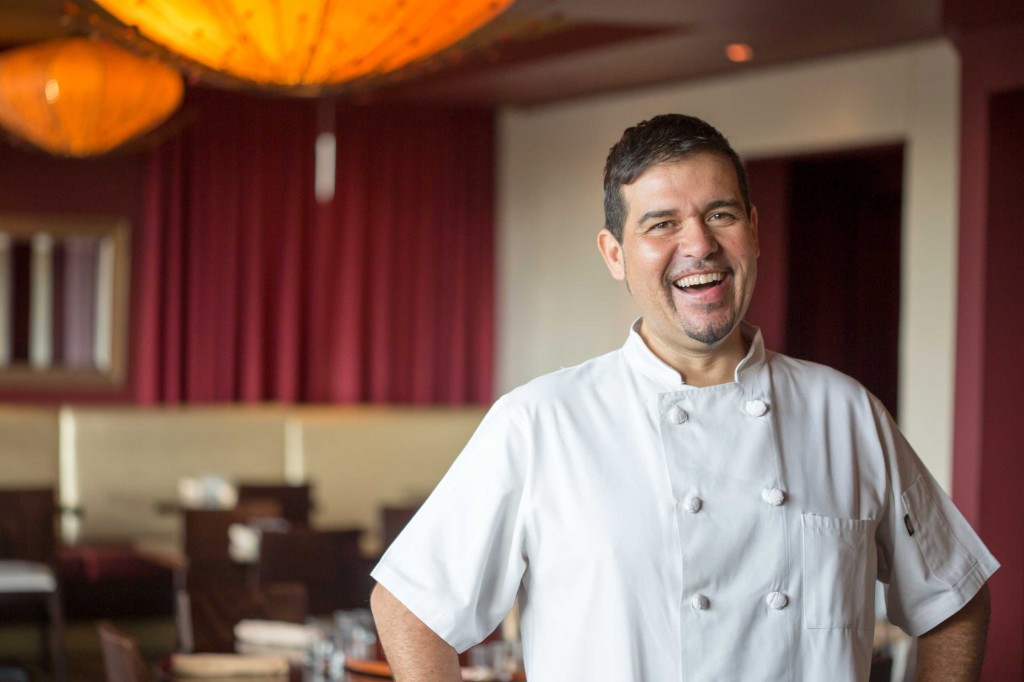 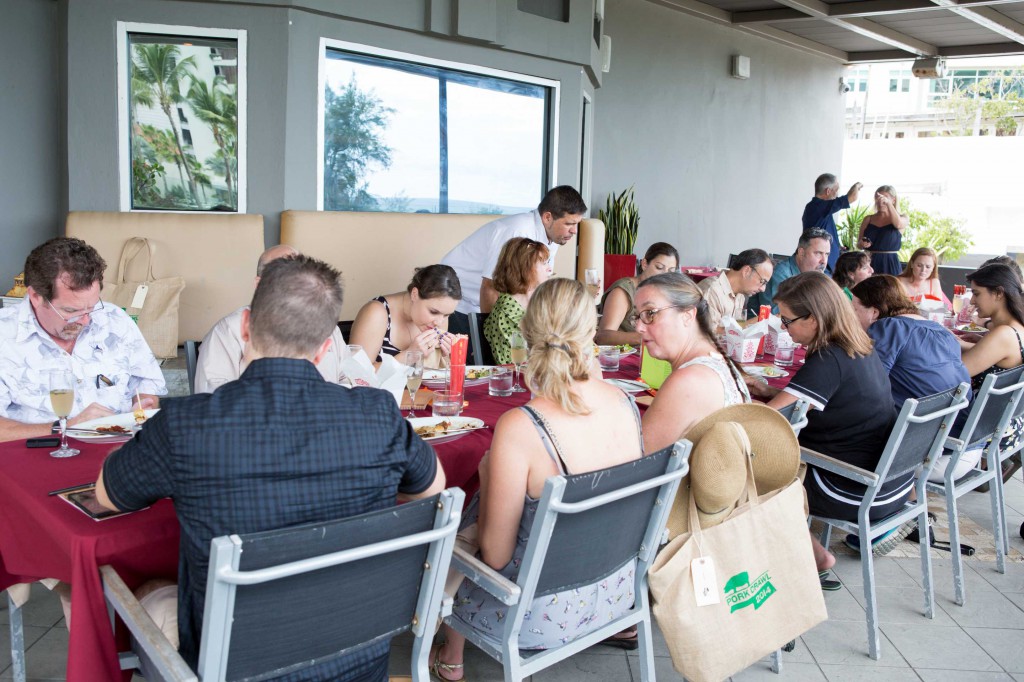 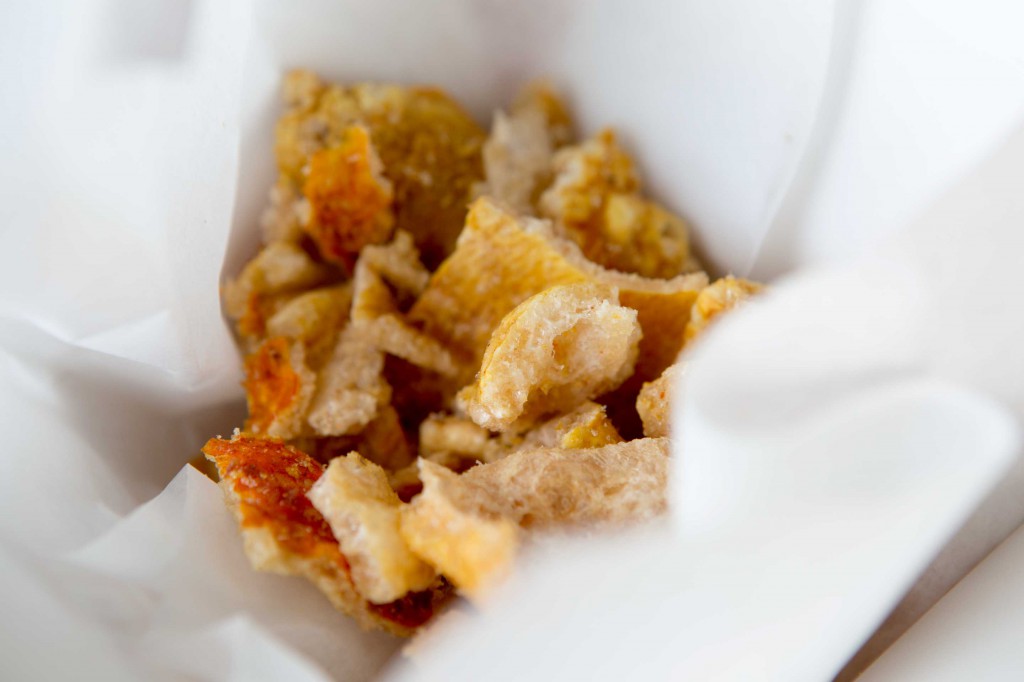 Venture into Puerto Rico’s Museum of Art in San Juan and sit down at Chef Mario Pagán’s Laurel Kitchen Art Bar to enjoy fine art at its most delicious. Open since 2010, Laurel features a Nuevo Caribe menu that showcases the finest seasonal ingredients from around the island – like pork belly onion paella with fresh avocado salad, pork pizetta with truffle honey ricotta and cracklings, and pork rillette with sweet plantain mousse. Diners enjoy their food paired with picturesque views of the museum gardens, and the understated, elegant décor lets the food shine.

Now one of the island’s most celebrated chefs, Pagán never considered a culinary career until his third year of architecture school, when he worked in some of Miami’s top kitchens – The Grand Café, Bugatti, Tamarind Restaurant and Norman’s New World Cuisine. He decided to follow his passion and graduated from Johnson & Wales University in Bay Harbor, FL and went on to train under renowned chef Alfredo Ayala at Chayote in San Juan, which he later bought from his mentor. Now, Pagán is the Chef/Owner of Laurel and Asian fusion restaurant Lemongrass, which he opened in 2005. He’s written two cookbooks: Cocinas del Mundo CARIBE (2005) and La Gran Cocina Caribeña y sus 12 Grandes Chefs (2004) and competed on The Food Network’s “The Next Iron Chef.” Food & Wine featured Laurel on its 2014 list of the best museum restaurants in America. 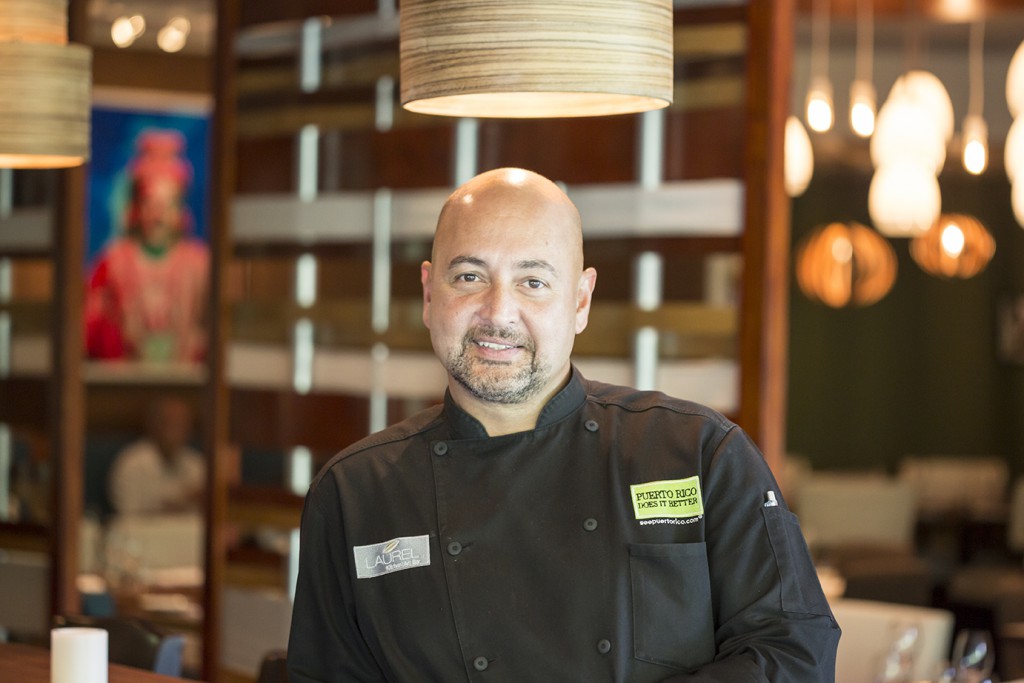 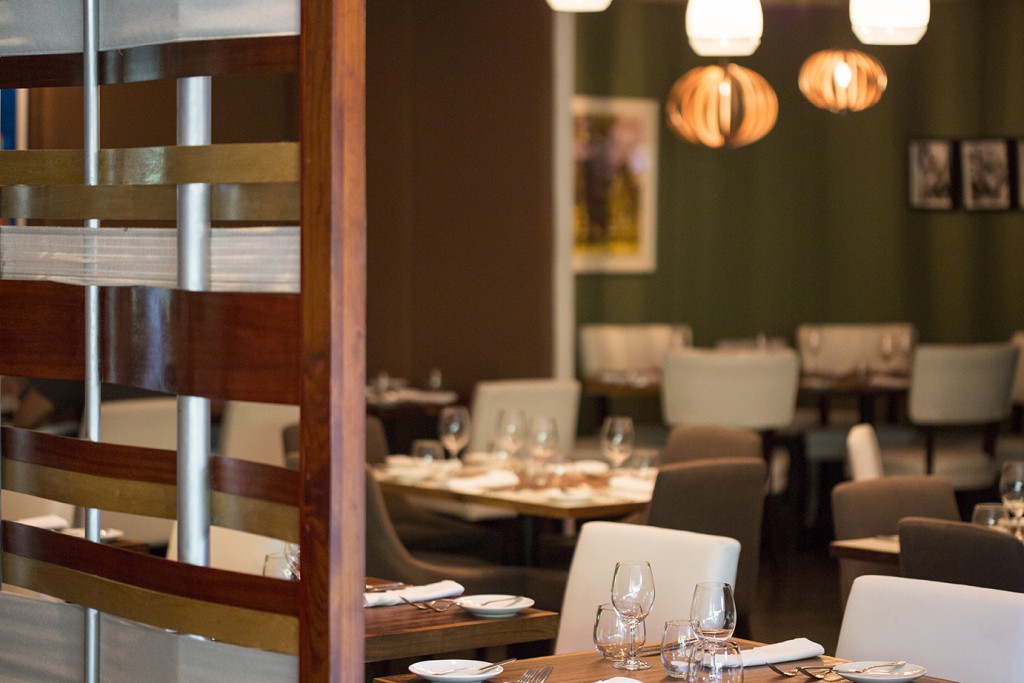 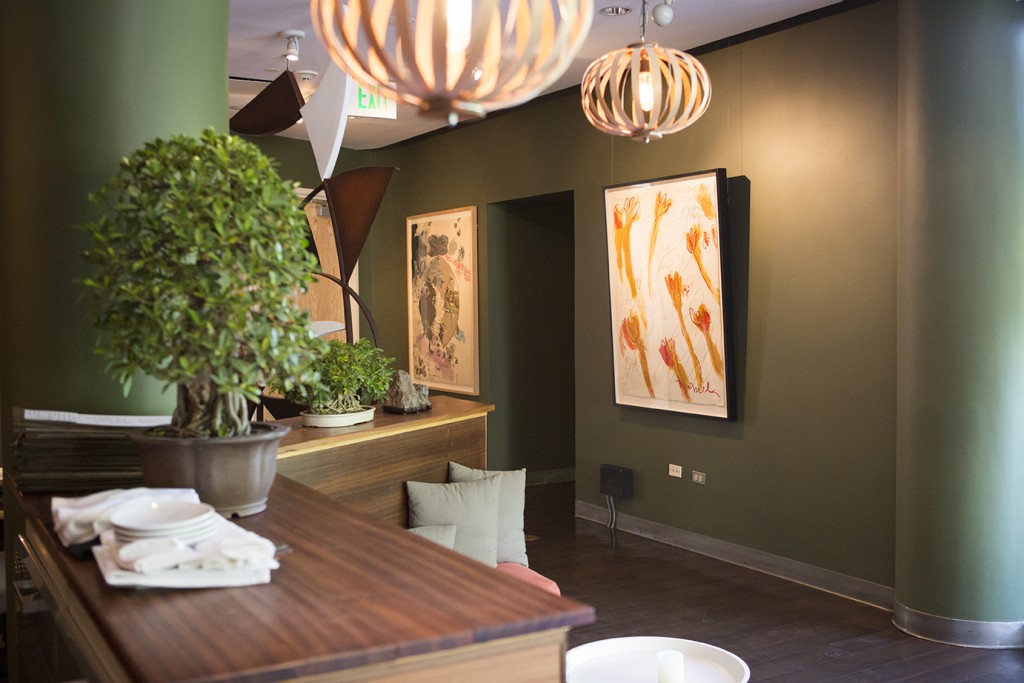 Bodegas Compostela’s motto is “excellence in constant evolution” – and for the last 32 years it has certainly delivered. Chef/Owner José Rey has created a simple but exquisite menu featuring flavorful Galician cuisine made with fresh, authentic ingredients. From the sophisticated dining room adorned with local art to the intimate wine room, diners can order unique tapas like braised pork cheek crepes or classic Spanish dishes like suckling pig with lentils, and pair it all with a glass from one of the city’s top wine cellars.

The Pork Crawl guests were greeted with glasses of Viña de Martin Os Pasás – a Spanish blend of Treixadura with Lado, Albariño, and Torrontes ­– poured expertly by co-owner and front-of-house manager Maximino Rey (no relation). Chef Rey sent out a Queen snapper tartare to cleanse attendee’s palates and whet appetites for more pork. He then served a house specialty, Roasted Suckling Pig with grilled pineapple and mango. The crisp skin and tender meat paired impeccably with a glass of 2008 El Castro de Valtuille Mencia from Northwest Spain.

Chef Rey and front-of-house manager Maximino Rey are both from small towns near Santiago de Compostela in Spain. They teamed up in 1982 to bring traditional Galician fine dining to Puerto Rico, and then transformed the original Compostela into Bodegas Compostela in 2007. The makeover included an updated menu with innovative small plates, minimalist décor, a wine store and a gourmet boutique with authentic Spanish ingredients. San Juan responded enthusiastically to this chic wine and tapas bar, and it comes highly recommended. 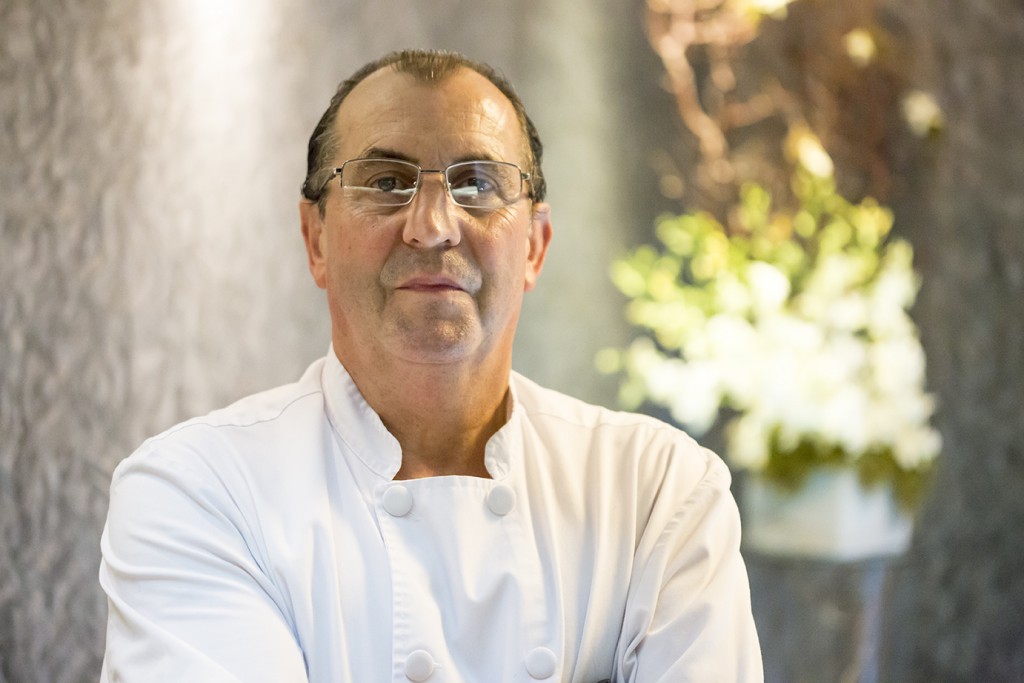 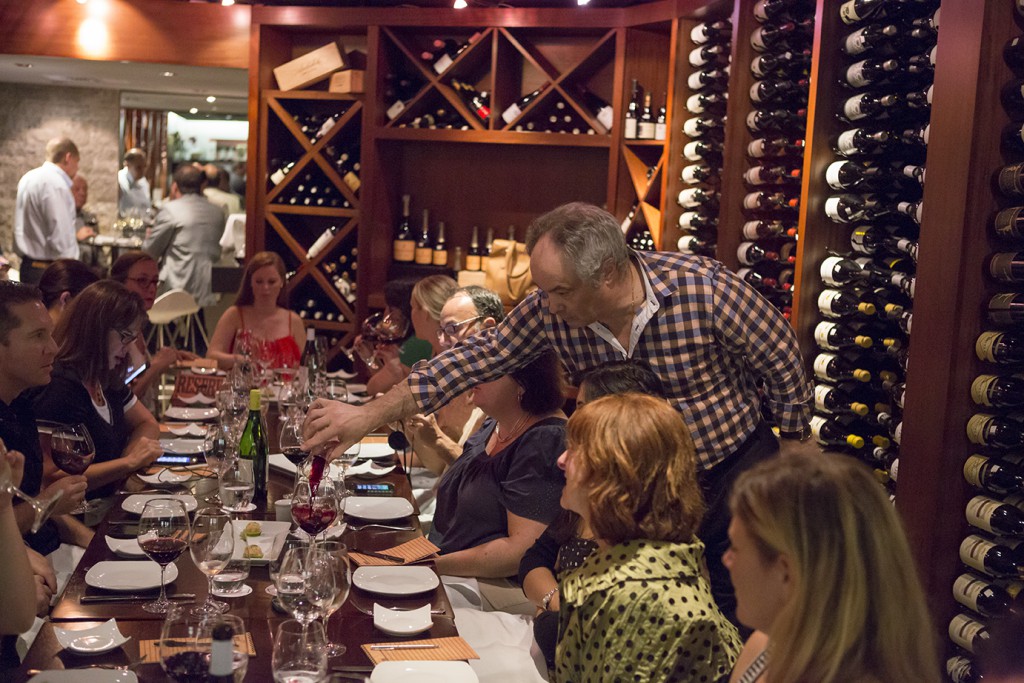 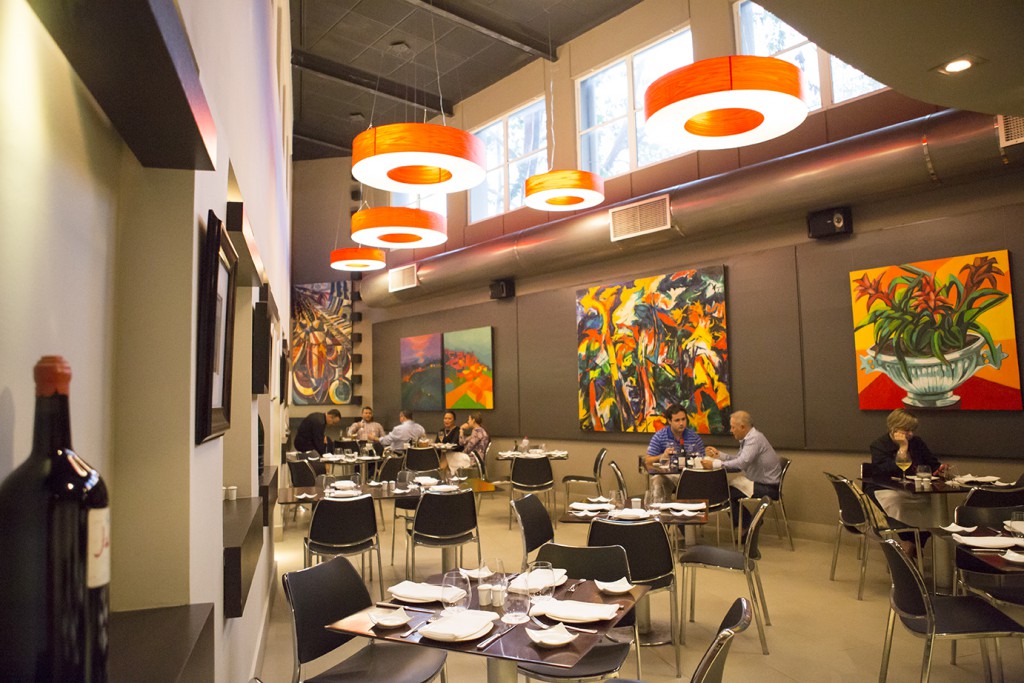 Before opening his restaurant in mid-2011, Santaella was already the premier gourmet caterer in San Juan. He’s worked with master chefs in kitchens across the world, including Barcelona’s El Bulli, New York’s Le Bernardin and San Francisco’s The Dining Room. Santaella is the author of the new cookbook Cocina Tropical: The Classic & Contemporary Flavors of Puerto Rico and has been featured in Food & Wine, Zagat and National Post. 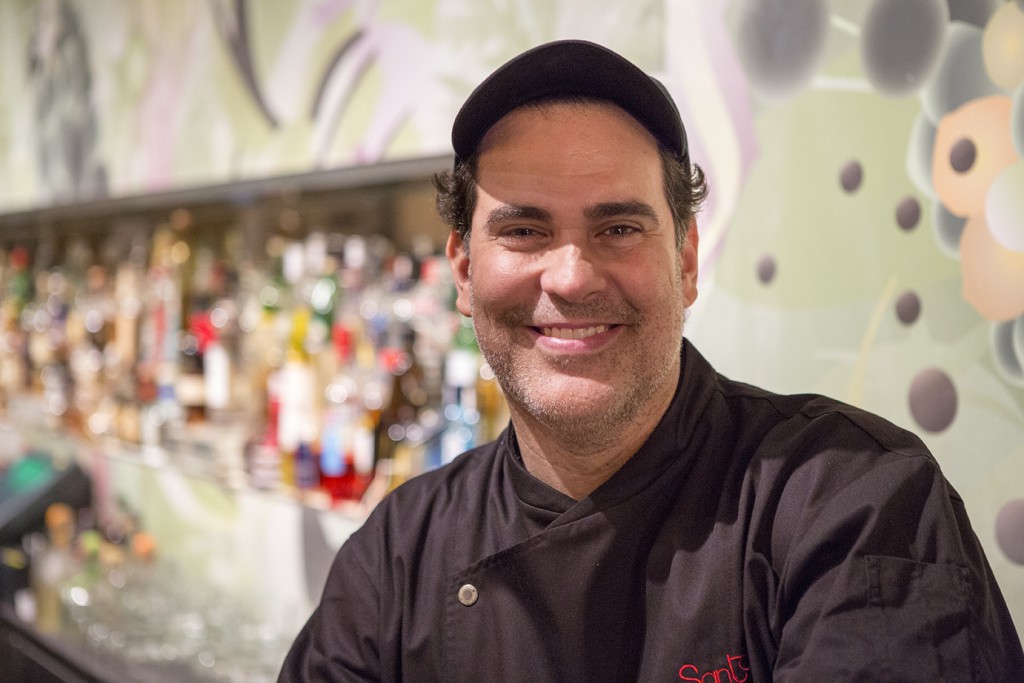 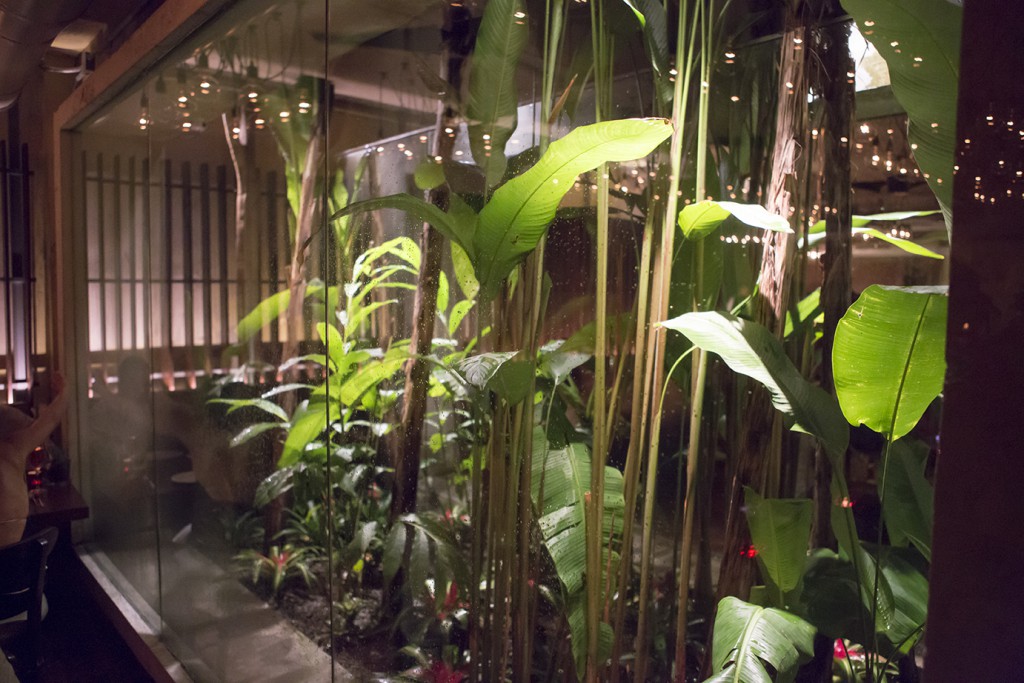 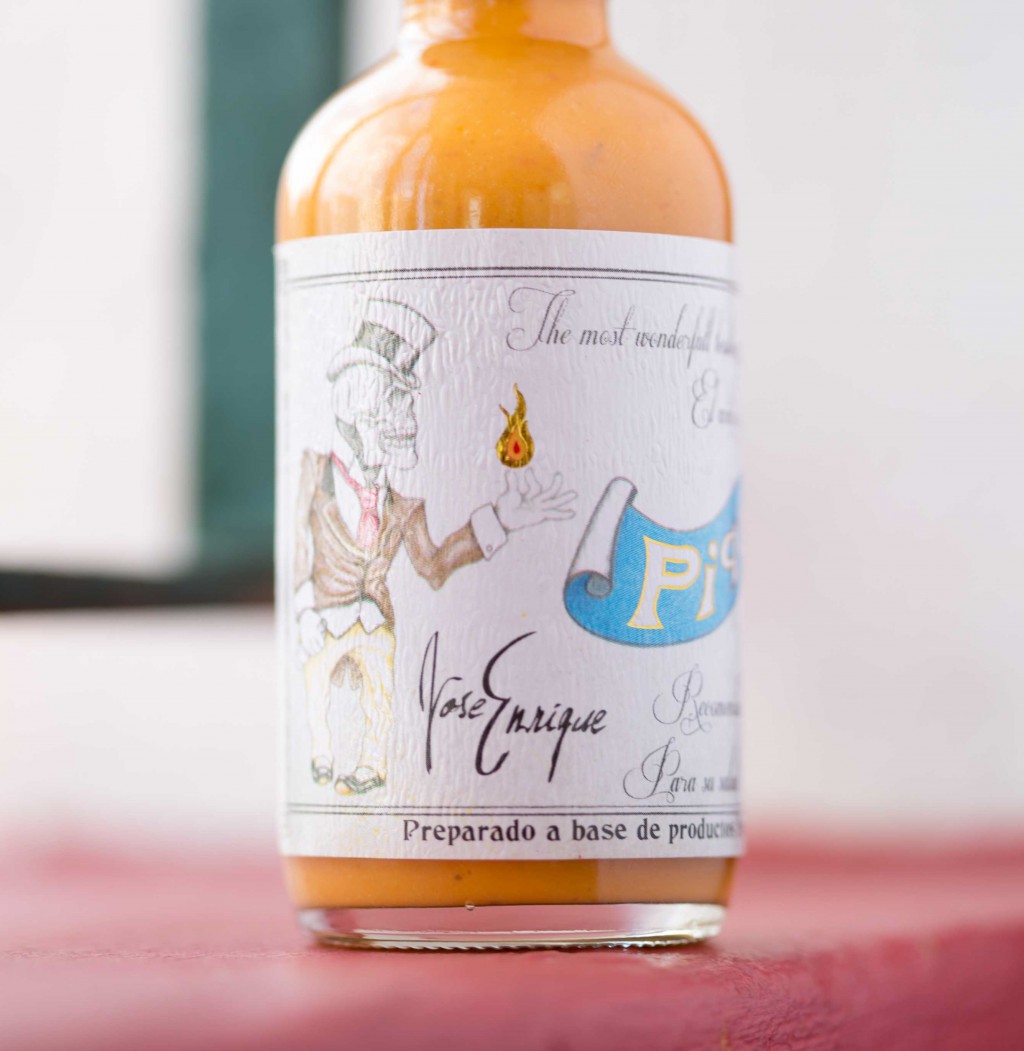 Finding the unmarked house that Jose Enrique’s first restaurant calls home isn’t difficult – just zero in on the block party with the funky music and amazing aromas. Located in the Santurce district of San Juan, the eatery offers elevated Criolla cuisine made with the island’s best ingredients from the market across the street in a high-energy, casual atmosphere. The menu is scrawled on a portable whiteboard and changes nightly – sometimes hourly – based on ingredient availability and chef inspiration. From grilled longaniza sausage with tostones, to smoked pork with pickled onions, to pork belly with pigeon peas, Jose Enrique delivers vivid, flavorful dishes that guests love to linger over.

To whet their appetites, crawl attendees enjoyed Medalla Lights and fresh coconut water with rum.  Chef Enrique then served Pork and Chorizo Turnovers topped off with a heavy dose of his pique. Next up was a Cuajitos, a pork stomach stew, surprisingly light and full of spice and seasoning.

Chef/Owner Jose Enrique is part of a new class of Puerto Rican chefs bringing serious culinary cred to the island, and his work has been acclaimed by Food & Wine, The James Beard Foundation, Condé Nast Traveler, Zagat, The Huffington Post and The Los Angeles Times. As Jose Enrique looks at new restaurant opportunities around the island and beyond, the party that invariably surrounds his neighborhood hot spot doesn’t look like it’s ending anytime soon. 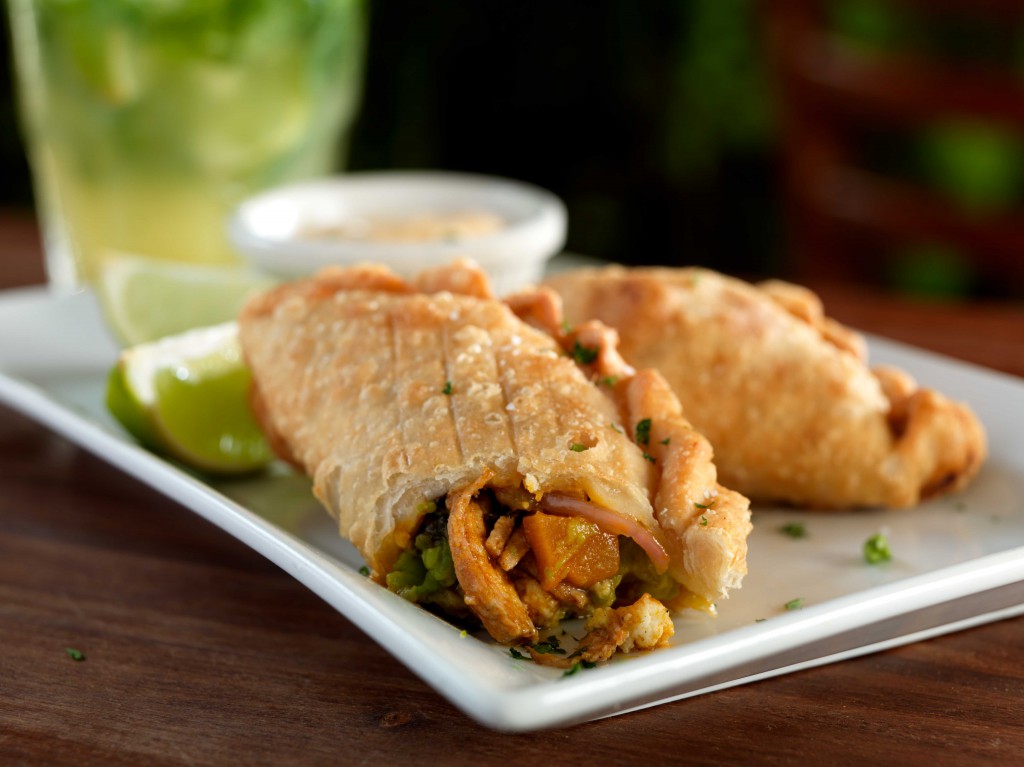 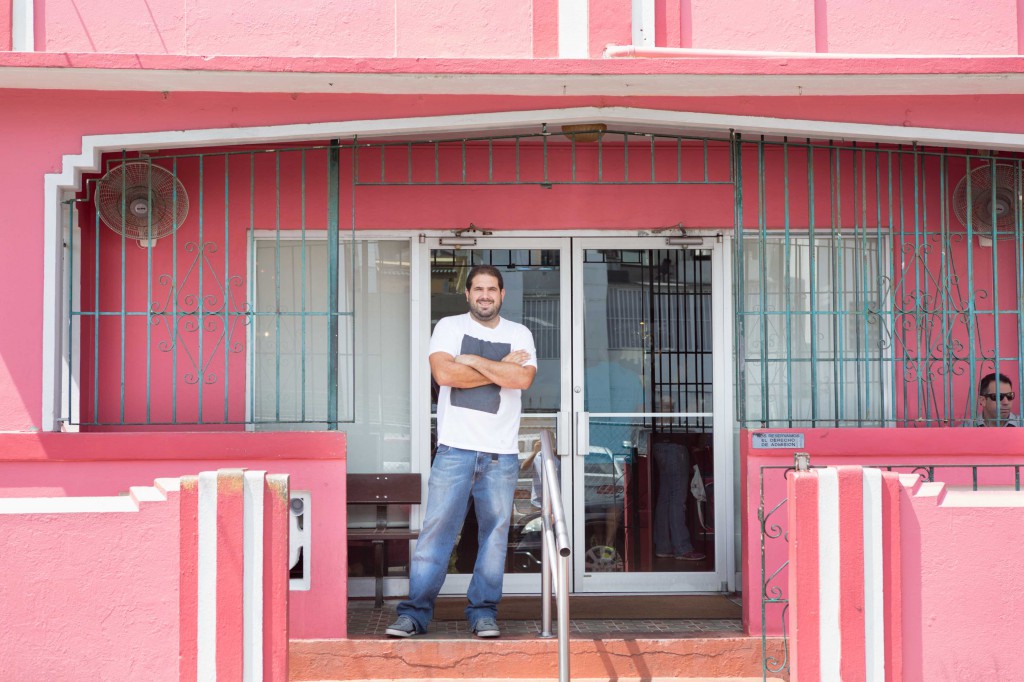 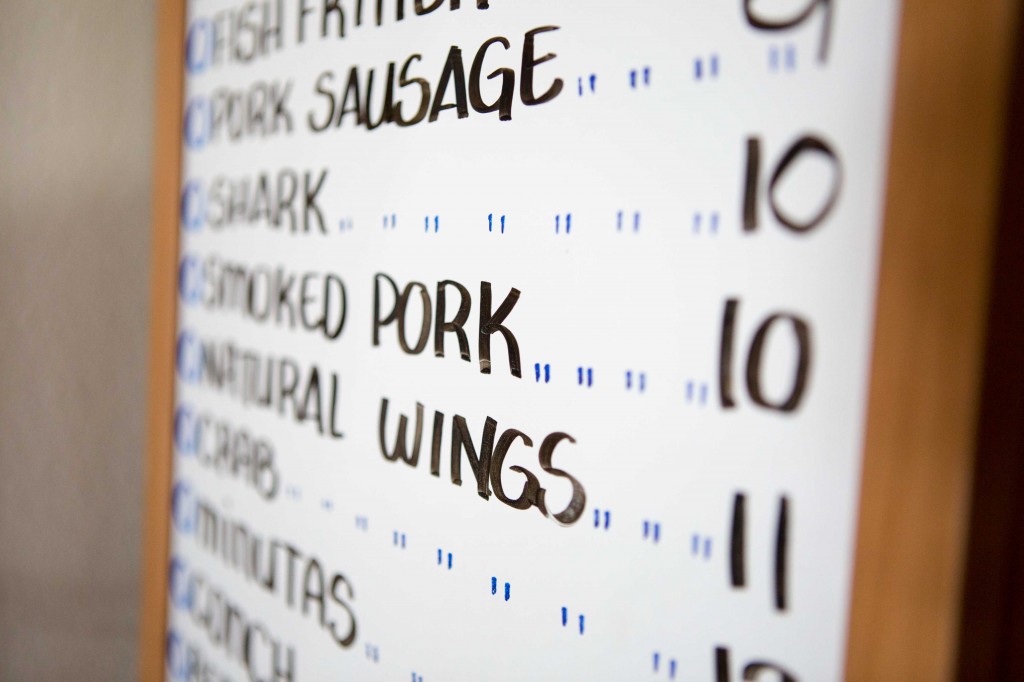 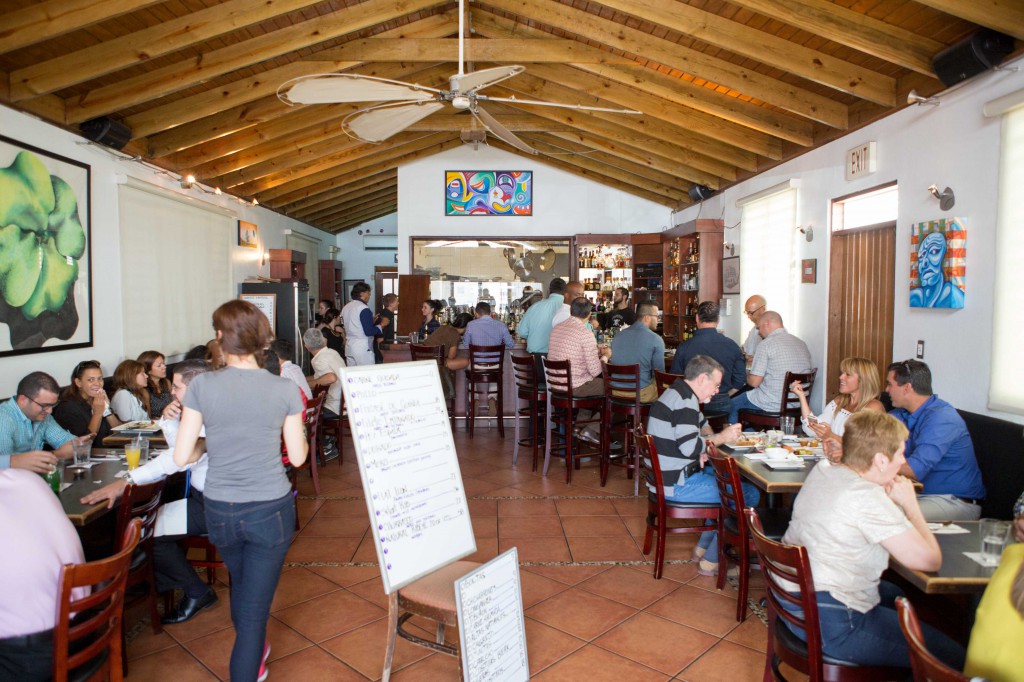