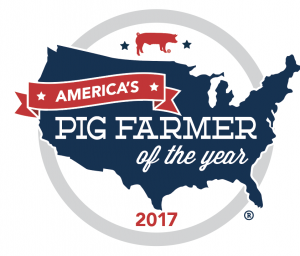 Sometimes a winding path with a few detours along the way is the right route to the ultimate destination. Just ask Leslie McCuiston, a senior production manager with The Maschhoffs who was recently named America’s Pig Farmer of the YearSM.

McCuiston found her fit in pig farming, where her career has flourished. Today, she’s responsible for 10 breed-to-wean farms in Nebraska and South Dakota.

All this creates plenty of opportunities, including career openings for women. Of the nine managers McCuiston works with, six are female.

“Women are natural-born caretakers,” McCuiston said. “In my experience, the pork industry has been very accepting and welcoming of women, who are a natural fit in livestock production.”

If there’s one thing McCuiston wants people to know about pig farmers, it’s the care they take to ensure the well-being of their livestock.

“Sometimes people think that if you work with large numbers of animals, you don’t care about the pigs,” she said. “Many people at our farms refer to sows as ‘their mamas’ and piglets as ‘their babies.’ We not only care for our pigs, but we care about the people who take care of the pigs, too.” 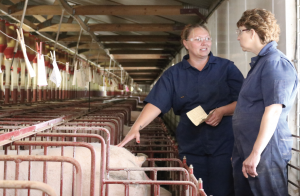 From Cattle to Pigs

This passion for agriculture is rooted in McCuiston’s farm background. She grew up on a cattle farm in southwest Oklahoma and had every intention of pursuing a career in the cattle industry – until she went to college.

“I started my college career by majoring in psychology so I could help others.” McCuiston said. “However, I began to miss agriculture.”

She switched her major and earned her undergraduate degree in ag economics with a minor in marketing from Oklahoma State University in 2001. After graduation, she landed a job with Cargill Pork and never looked back.

For McCuiston, the best part of the day is when she’s on the farm. “I like to check in, see how things are going and get my hands dirty.”

While pig farming is her focus, McCuiston still values the semesters she spent studying psychology.

“Those classes paid off, because so much of my job involves working with people,” said McCuiston, who is a member of the Pork Checkoff’s Operation Main Street outreach program. “I’m always curious about how people make decisions, and I look for ways to connect more effectively with others.”

These skills are proving invaluable in McCuiston’s new role as America’s Pig Farmer of the Year.
“It’s so important to tell our story,” she emphasized. “If we don’t, who will?”

It requires courage and confidence to tell these stories, though. McCuiston acknowledges that these traits take time to develop.

You Aren’t that Important 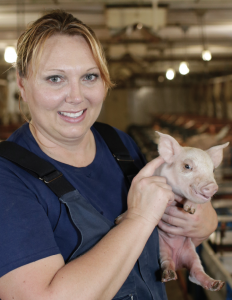 “I’ve struggled with self confidence in the past,” said McCuiston, who was grateful when an acquaintance shared a priceless insight. “The concept was, ‘You aren’t that important,’ meaning other people aren’t thinking about you as much as you assume. This perspective keeps you from getting too self-absorbed and beating yourself up.”

While McCuiston used to feel nervous and uncomfortable when she walked into a room of strangers to give a speech, she’s learned to focus less on what others think of her and focus more on sharing her message. This is important as McCuiston finds new ways to connect with consumers who are far removed from agriculture.

“I want to find new, innovative ways to show others what we do in pig farming, explain how much we care and help people understand where their food comes from,” said McCuiston, who is interested in virtual tours, Facetime chats and more.
She also wants to encourage others to consider a career in pig farming.

“Our industry needs to continue to recruit people who are excited about working in pig farming,” McCuiston said. “I look forward to sharing more about the innovation and technology in modern ag as this year’s America’s Pig Farmer of the Year. It’s cool.”

Continuous improvement is what it’s all about, said McCuiston, who is honored to be this year’s winner.

“It’s exciting to see what current ag professionals and the next generation will bring to pig farming so we can do what we do better,” McCuiston said. “If I can share even a fraction of the excitement and passion I have for pig farming, we all win.”

You could be the 2018 America’s Pig Farmer of the Year. Learn how at AmericasPigFarmer.com.

While their farms represent diversity in the pork industry, this year’s America’s Pig Farmer of the YearSM finalists share a common passion with winner Leslie McCuiston – telling their farm’s stories to help put a face on pig farming. They are:

The National Pork Board awards the America’s Pig Farmer of the Year honor annually to a pig farmer who demonstrates and lives by the We CareSM ethical principles. Food, agriculture, welfare and sustainability experts served as judges.

“We were pleased to have a diverse, accomplished team of judges,” said National Pork Board President Terry O’Neel, Friend, Nebraska. “It is critical that this panel is fair and objective while bringing diverse points of view to the process.”

Walmart’s Brittni Furrow, one of the judges, said, “Farming has never been more in focus for today’s retail consumers. They do not just expect food producers to be ethical and sustainable, they demand it. This award raises awareness on the importance of adopting best-in-class agricultural practices being employed by our nation’s farmers.”

The judges evaluated and scored videos produced at the finalists’ farms and conducted interviews. The public also weighed in by viewing the videos at americaspigfarmer.com and voting for their favorite. McCuiston was announced as the winner on Oct. 3 in Chicago as part of National Pork Month.
On the following pages, read about the three finalists that join McCuiston in speaking up for pork.