A Conversation with Marc Forgione

From the son of “The Godfather of American Cuisine” to line cook to Iron Chef and beyond, Marc Forgione takes classic Americana to new heights. As the chef/owner of Michelin-rated Restaurant Marc Forgione and the new American steak restaurant American Cut, his dedication to fresh, ingredient-driven food has propelled him to the forefront of the modern American culinary scene.

Forgione’s career began at 16, on the line at his father, Larry Forgione’s, restaurant An American Place. After getting a degree from the School of Hotel and Restaurant Management at Amherst and a stint in France learning under Michel Guerard, Forgione worked his way up the ladder at the BLT Restaurant Group to become corporate chef. He and partner Christopher Blumlo opened Marc Forgione (formerly known as Forge) in 2008, and were awarded the coveted Michelin star in 2010 – the same year he won The Food Network’s “The Next Iron Chef.” He partnered with LDV Hospitality to open American Cut in 2012, now with two locations in Atlantic City, NJ and New York City.

We caught up with Marc to talk about the classics, modern American cuisine and following your instincts.

NPB: Did you always want to be a chef? How did calling “The Godfather of American Cuisine” “Dad” impact your career aspirations?

Chef: I actually went to college and studied Forestry and then Psychology, but it felt forced. I always loved cooking – I’d do it for my friends, I worked in the kitchen when I was younger, and I realized it was how I really had fun. Having “The Godfather of American Cuisine” as my dad hurt as much as it helped; if I screwed something up, it would be “Oh, Forgione’s son doesn’t even know how to make risotto,” or “Did your dad teach you how to make that?” I couldn’t hide in the corner. My nickname at one of my jobs was “Son of Larry.” When I worked in my dad’s restaurants, he made sure no one treated me like his son.

NPB: What’s your food philosophy? How do you express it in your restaurants?

Chef: I believe in cooking with respect – respect your ingredients, respect for yourself, respect the business. I try to instill that belief in my restaurant family.

NPB: What classic dishes did you make when you first started cooking on the line?

Chef: One of the first things I learned how to make when I was allowed on the hot line was beurre blanc. Whenever I would cook for people at home as a young cook I would pair beurre blanc with everything from chopped tomatoes to clams and parsley. As I don’t really cook like that anymore, that was my first kind of “experimental” moment.

NPB: How did living and working in France and learning classic French techniques help you understand the importance of the basics?

Chef: My time spent in France was really eye opening. It was classic cuisine done in the classic way. At the time, “modernist” cuisine was becoming trendy so it was really nice to learn the classics from one of the masters of French cuisine.

NPB: We’re seeing classic continental dishes reappearing on menus with modern interpretations. What is your take on this emerging trend?

Chef: I wouldn’t really call it an “emerging trend.” I think it’s been going on for a while – anyone who is classically trained interprets a classic dish whether they realize it or not. 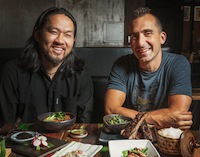 NPB: Can you give us an example of how you would modernize a traditional continental dish with pork? What ingredients and cooking methods would you use to make the dish seasonal and contemporary?

Chef: A very classic dish that you find at truck stop diners across America is Ham Steak with Redeye Gravy. We do it with speck-wrapped pork tenderloin and our version of a redeye gravy.

NPB: American Cut is known as “The New American Steak Restaurant.” How do you keep your menu fresh and interesting while still satisfying customers who want the classics?

Chef: We are just as serious about preserving the classics as we are about “reinventing” and “pushing the envelope.” We may serve bone marrow, foie gras and escargot – but at the same time, all the steaks come on a plate by themselves with their own basting juices.

NPB: As an Iron Chef, what’s the first thing that goes through your mind when you hear the secret ingredient? How do you prepare for a battle?

Chef: Something my mother told me going all the way back to The Next Iron Chef was to follow your gut and listen to your first instinct. So I usually go with the first idea that jumps into my head because that’s what my subconscious is telling me to do. Sometimes it works, sometimes it doesn’t.

NPB: What’s your go-to New York street food? What cuisines are you most likely to enjoy on your days off?

Chef: I love a good slice of NYC pizza. In the winter, my go-to is a nice hot Pho. I like it because they have a lot of different condiments on the table: chili sauce, hot peppers, chili paste. NPB: What is your favorite pork dish in New York City and where can we find it?

Chef: I love the pork bánh mì at Khe-Yo