A Conversation with Dave Danhi 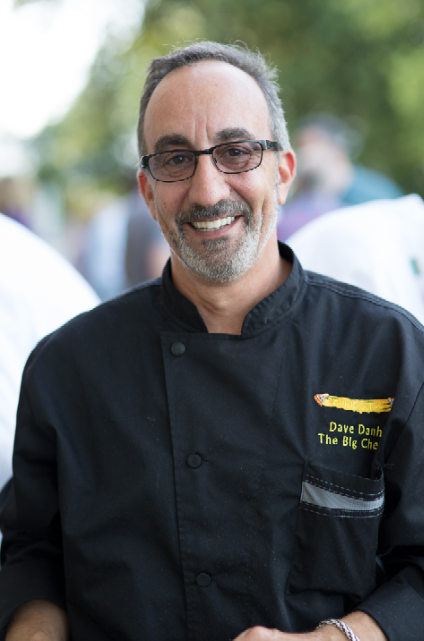 From salad bar attendant to executive chef to hospitality recruiter…to truck driver? Dave Danhi has been a mainstay in the Southern California restaurant scene for over 30 years, and his new adventure has him taking to the streets with The Grilled Cheese Truck. Since 2009, Danhi has been delivering innovative indulgence to hungry crowds across Southern California, with a fleet of trucks expanding to Phoenix and Texas.

Danhi’s career has run the gamut. The former Executive Chef of Georgia, the Roxbury Supper Club, and King’s Seafood Company, Danhi began working for hospitality recruitment firm DD Agency in 1998. He bought the agency in 2005 and still runs it today – in between thinking up new twists on classic comfort food, testing in the Grilled Cheese kitchen, and manning the social media presence for his food truck empire.

We caught up with Dave to talk trucks, the American street food scene and why pork is perfect on the go.

NPB: What inspired you to become a chef? What’s your culinary philosophy?

Chef: At 14, I wanted to be independent and make my own money, so I got a job as a salad bar attendant at a local restaurant. From there I was promoted to a cook – once the pan hit the burner I never looked back.

I strongly believe that food makes people happy, and that’s why I cook! It’s really what keeps me going in a profession that isn’t necessarily glamorous. I love that food is a common denominator between people and that I get to be part of creating their memories.

NPB: How do you express this philosophy in your food?

Chef: I’ve gone through a few different stages in my career – I had an ego when cooking in fine dining and was quickly humbled when I switched to the food truck. I learned you have to cook for who’s walking in the door to be successful – so give the people what they want! In my case it’s comforting grilled cheeses that provide childhood memories suited for an adult palate!

NPB: Who is the chef that has influenced your career the most and why?

Chef: That’s a tough question! Matt Stein, an old co-worker, taught me to always ask the question why – why a hot pan, or why that garnish. If there isn’t a reason than you probably shouldn’t do it. It made me a more thoughtful chef. 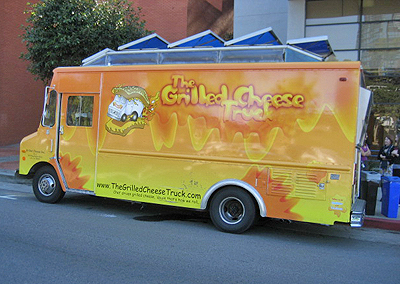 NPB: With so many years of restaurant experience, what made you start the Grilled Cheese Truck? What enticed you to join the street food scene?

Chef: In all my years of cooking, it was never to become popular. It was just to make people happy with food, so I never engaged in cooking competitions. Then one day I received a random email about the Grilled Cheese Invitational. The email made me wonder what I would actually make if I competed, and after some thought I decided to act on it. I didn’t win the competition, but I was introduced to this cult following. It was funny; when I walked out of the building there was a healthy food truck out front. I thought to myself, these people don’t want healthy food – they want grilled cheeses! When I got home and did some research I realized there was not one single grilled cheese truck out there.

And so far, cooking in the truck is the most rewarding culinary experience I’ve had to date. I really like working directly with the people and working in a fishbowl environment. 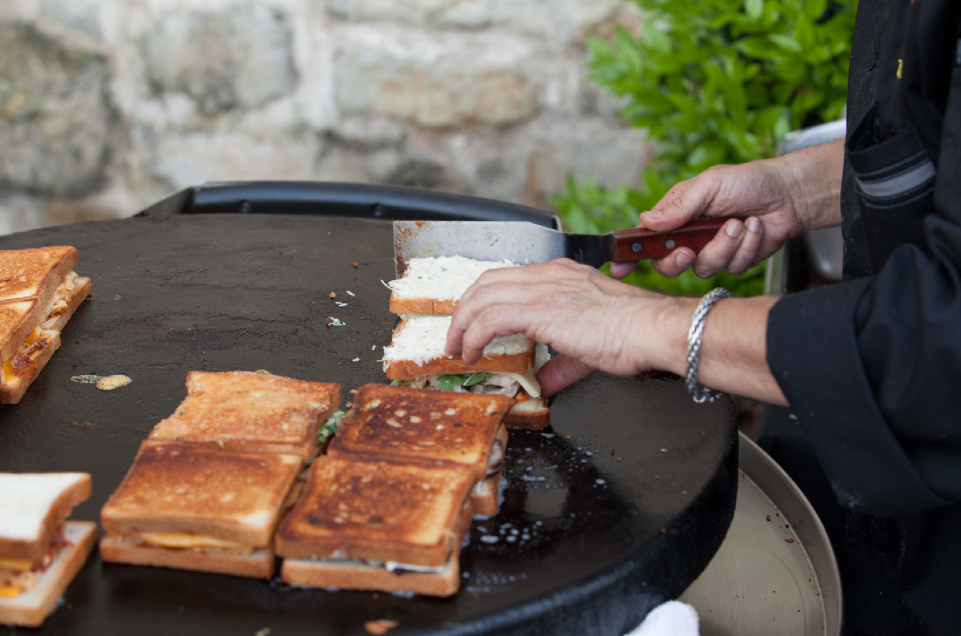 NPB: Consumers go crazy for grilled cheeses today. There is actually a National Grilled Cheese Day (April 12) and as you mentioned, grilled cheese culinary competitions. What do you think is behind this craze?

Chef: In my opinion, it’s a culinary common denominator. Many people grow up eating some kind of grilled cheese. It’s always a positive experience, whether your mom made it for you after school or you’re eating one at two in the morning after a fun night. I always say, “You can’t make a grilled cheese without smiling!”

NPB: What is the biggest difference working in the truck vs. working in a restaurant? Chef: Working on a truck is much more challenging – it’s basically Murphy’s Law on wheels! Equipment is rolling, the truck breaks down before you get to your spot, you run out of food, etc. Food trucks can be a logistical nightmare. I would say sometimes the biggest struggle is space and how the trucks’ layout and equipment dictate your menu. 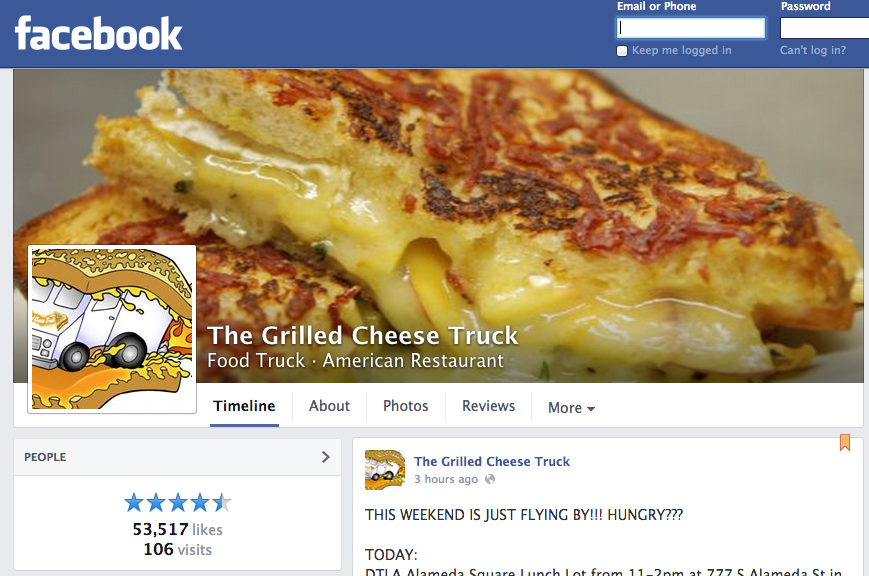 NPB: How does social media play into running a food truck?

Chef: The biggest pro is that you have your finger on the pulse all the time and you have the ability to interact and engage your followers at a moment’s notice. It helps create a personality for your company. The biggest con is dealing with negative feedback – but I try to look at this as a positive. In the end, this feedback makes us more aware and helps us pay attention to detail. Oh, and did I mention typos? You have to watch out for those – I’ve found the “O” and the “I” are unfortunately close together!

NPB: What’s the secret to your large following? How do you take social media beyond simply posting location and food photos?

Chef: I love polling the followers. I ask them questions like, “What type of cheese do you want us to work with?” or “What flavors are you craving right now?” Also, I make it a point to look up social media analytics. I do this to learn more about who’s following us and what their interests are. It’s really a marketing opportunity. Do they like music? What kind? Do they play Dungeon and Dragons, etc? This takes time, but it’s definitely worthwhile. 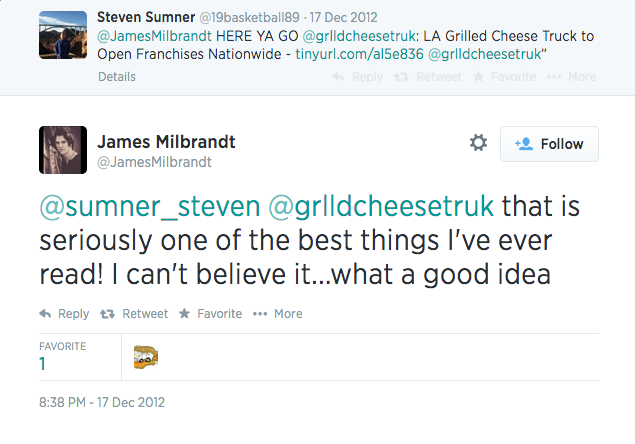 NPB: Do any tweets from followers stick out in your mind?

Chef: Before we even got the keys to the first truck we had 2,500 followers. Someone posted, “Your tweets should be considered cruel and inhumane until the truck is up and running!” and “Is this a hoax – this is brilliant!” But the most touching tweet to date was “You’re the best thing after chemotherapy!” Just to know we made that one person’s day better was enough for me. It still gives me goose bumps!

NPB: How do you think street food impacts or inspires brick and mortar restaurants?

Chef: I always think, “Let’s be smart – food trucks are like rolling billboards for restaurants!” It’s a great way to interact with the community and market your business. America’s culinary landscape didn’t have an established street food scene. It’s made the food more innovative and has pushed some restaurants to change their menu sizes – they realize that snack sizes can sell and people will show up for the food. Restaurants don’t have to make behemoth plates anymore!

NPB: What process do you go through to create specials for the Grilled Cheese Truck?

Chef: There are a couple of ways. The first is just inspiration. Maybe I’m walking through a market and see artichokes and I haven’t done something with them in a while, or maybe I turn off the music in my car and think about how we can work familiar tastes into a grilled cheese – like french onion soup. We also poll our followers to see what they want! 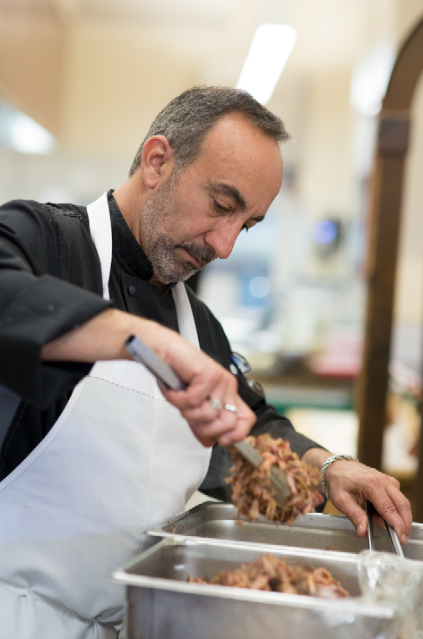 NPB: Can you tell us about any recent pork specials?

Chef: My favorite pork special is the smoked pork loin with apricot preserves, fresh thyme and brie on peppercorn bread. I really like how the flavors balance each other. We also had a Piggy Melt special with bacon-onion-bourbon marmalade, brie, ham and roasted smoked pork loin, with a Parmesan-bacon crust on the outside! I think our followers would say the secret menu S’more is their favorite. Consumers have the option to get the regular S’more, but asking for it off the secret menu adds bacon to the melt! We probably sell more with bacon than without. I think my next special will incorporate pork belly!

NPB: What about pork makes it a good protein for street food?

Chef: Pork is very authentic to street foods – historically, it was considered a peasant food. And beyond its authenticity to dishes from places like Southeast Asia and Latin countries, pork is very popular right now. I even have a pig tattooed across my chest! I also learned at Pork Summit 2014 that it’s very affordable – pork loin is actually cheaper then belly and can be applied many ways. So I would say it also offers vendors more profits.

NPB: Do you have a favorite pork and grilled cheese combination?

Chef: Hands down the Cheesy Mac and Rib. The sandwich itself is a bit of a “biography” of my culinary loves. The macaroni and cheese recipe is based off the recipe served at Georgia, where I started really having fun with comfort food. The rib rub also started at Georgia, but it has evolved over the past fifteen years into something I am extremely proud of. All the elements are very close to my heart – it’s my baby!

NPB: How many trucks do you have now? What’s it like managing so many?

Chef: We started with one, and I would say, “Be careful what you wish for!” Now there are twelve – nine in southern California and three in Phoenix. The biggest challenge is controlling quality, so we work out of a commissary kitchen where I can oversee the food and the trucks pick up their daily order. 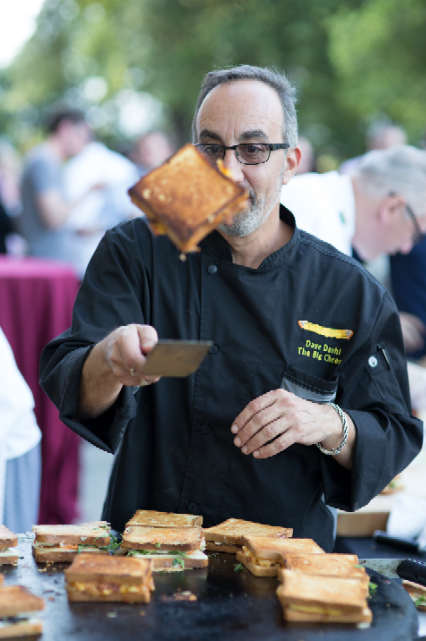 NPB: Tell us about the Grilled Cheese Truck franchise and the exclusive opportunity to veterans?

Chef: We have some exciting new things in store for The Grilled Cheese Truck – we are looking forward to a brick and mortar location soon and going public. The most exciting news is the new Veteran Program. The Grilled Cheese Truck has committed the first 100 trucks to be run by qualified Veterans. We feel that the skill set developed by a veteran’s military training lends itself incredibly well to operating one of our trucks, which requires hard work, long hours and the ability to think under pressure while being able to smile at our guests. With so much success, we really had to take the bull by its horns. I really wanted to give back and do something that feels good – and that’s by helping veterans assimilate back into life as a civilian.

NPB: What are your five favorite street food pork dishes in the Los Angeles area and where can we find them?

Chef: When I’m looking for my dose of Vitamin P – here are a few of my go-to spots: Animal Restaurant, although a brick and mortar restaurant, I have stopped there (with the truck) and grabbed several of their BBQ Pork Belly Sliders. The belly is cooked perfectly and not overpowered by the barbecue sauce.

Havana Mania, another Brick and Mortar stop, serves Cuban street food in my eyes. Every Tuesday they roast a whole pig – the lechon is delicious and you’re guaranteed to get a wonderful, crispy pork skin cracklin’ as a garnish.

Ramen Yamadaya, in Gardena, puts out the most amazing ramen. I always get the Tonkotsu Ramen spicy with a side of pork belly to make sure there’s enough! This is liquid pork in its most perfect form.

Los Cinco Puntos has the most amazing carnitas tacos in LA. Make sure to get there early and specifically ask for the shoulder meat! The salsas are perfect and don’t overwhelm the meat, but the heat will sneak up on you if you’re not careful.

Bigmista’s BBQ, a little hard to find, this barbecue spot has the best ribs! They are also known for their pig candy, which often mimic potato chips in the car with the exception of the sticky steering wheel afterwards – but totally worth it!